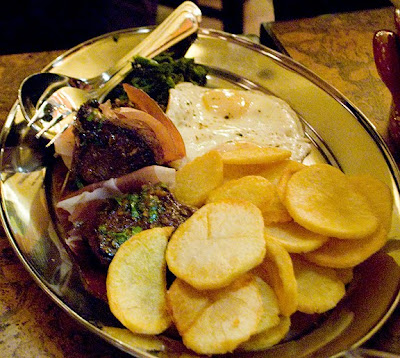 I have to admit having some trepidation about Koo Zee Doo, the new Portuguese restaurant at 614 North Second Street. It seemed almost eerily similar in concept to their neighbors a few doors up at Kong: both new places featuring experienced chefs interpreting the traditional cuisine of their wives' families. In the case of Kong, it's the street food of Hong Kong; for Koo Zee Doo it's the homey cooking of Portugal.

A few doors north, Kong's versions of Chinese street food have been disappointing, neither authentic nor all that tasty on an absolute level. So we were concerned - how well would this chef be able to replicate and innovate when working with Portuguese cuisine that he didn't grow up eating?

Well, either chef David Gilberg is a good student, or his wife Carla Gonçalves is an excellent teacher, or both, because the food we had at two different dinners was both true to its roots, and consistently delicious. I'm no authority on Portuguese food, but on our first visit we had a native Portugeezer with us to weigh-in on the authenticity issue. After some initial skepticism, he pronounced that most things felt "right" or were at least recognizable as valid interpretations. I'm personally not all that concerned about how "correct" the food is, as long as it's tasty, but I certainly find it more interesting if it's accurately reflecting its origins.

That said, any creative act should show some traces of its creator, and reflect its place and time, and that's certainly the case here. It's Portuguese food, but made by an American chef, in Philadelphia, in 2009. So what shows up on your plate might not be exactly as any random Portuguese grandmother would make it, but I'm sure she wouldn't find it unfamiliar, or disrespectful.

The meal starts with some wonderful bread, baked in-house by Carla Gonçalves, who had already made quite a reputation in town for her baking at the previous restaurants where she and David Gilberg had worked previously. Her breads at Coquette, and even more so, her biscuits and Kimmelweck rolls at the Ugly American, had created a significant buzz. Koo Zee Doo is the most impressive showing yet by the pair, probably because it's their own place, and they're free to do things their own way, rather than collaborating with quirky owners. The breads here are a light French-Bread-ish roll, and Broa, a dense cornmeal-based bread typical of Portugal. 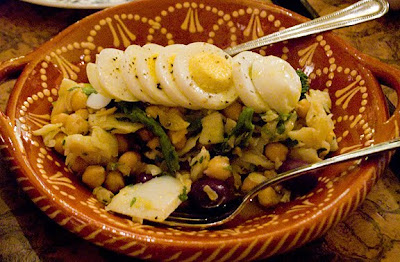 We started with the Queijo Fresco, a light goat's milk cheese, and the Caldo Verde, a hearty potato and collard greens soup, studded with spicy chouriço sausage. Most noteworthy was the Salada de Bacalhau com Grão em Bico, a chickpea salad with house-cured salt cod and hard-boiled egg. The fish had a wonderful firm texture and intense, salty flavor, but was much more fresh tasting and less stringy than any conventional dried cod I've ever had.

The Carne de Porco à Alentenjano (Pork and Clams) is absolutely addictive. Tender cubes of pork are accompanied by tender clams, and cubes of perfectly roasted potato, both crispy and fluffy. Those elements would be perfectly sufficient to make this noteworthy, but there's also the most delicious sauce in the bottom of the dish, a gravy-like essence of both meat and shellfish. I couldn't stop eating this. 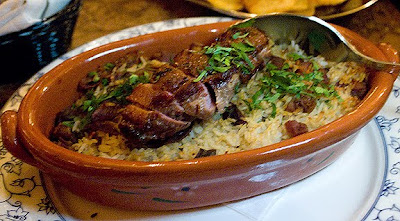 Every once in a while, a restaurant features a dish that so strongly resonates with me that I absolutely must get it every time. I suspect that the Arroz de Pato is one of those. The baked rice is studded with crispy shreds of duck leg, and topped with a sliced, grilled duck breast. It's comforting, yet intense, a great accompaniment to other dishes, and strong enough to stand alone. Let some of that pork and clam juice seep into it, or some runny egg, that is, if it's on your plate long enough to soak anything up.

The Bife à Portuguesa (pictured at top) is a few chunks of Picanha steak, draped with slices of ham, a couple of sunny-side-up eggs and discs of the platonic ideal of the fried potato. I don't think I can even remember what a french fry is anymore, my brain has replaced all fried potatoes with an image of these. We found the steak to be tender and juicy, and the whole package, well, with the ham, and the egg yolk drizzling over the meat, and into the fried potatoes, oooph! Decadent and delicious.

The Coelho à Caçador, a rabbit stew, is really mis-named. It is in fact, a pork belly stew, with some rabbit tucked in behind the crispy edges of the roasted cubes of bacon... Well, OK, I suppose there was a big rabbit leg in there, and some other significant chunks, but it actually did take some digging to find it. Not that I'm complaining about getting unctuous nuggets of pork on my spoon as I dig for rabbit and vegetables. It's worth noting too that the tiny roasted potatoes and other vegetables in the stew were cooked really nicely as well, they weren't merely afterthoughts, or elements used only for flavoring the stew, they were quite good on their own.

Speaking of vegetables, we were intrigued by the Milho Frito, billed as fried corn porridge. (Think fried slabs of polenta, studded with vegetables.) Roasted and grilled vegetables added a mysterious smoky note to the plate. This might be a bit dense and heavy for one person to eat as an entree, but it's great for the table to share.

In fact everything is presented on large plates, in very generous portions, designed to share family-style, and I can testify that that's the best way to experience this food, having a little bit of everything.

Another of those everythings we tried was the signature Cozido Minhoto, a large pot of a wide array of meats: ribs, three kinds of sausages, chicken, cabbage and other vegetables. It's a hearty, homey dish, everything boiled together in a pot, so it bears some resemblance to a traditional New England Boiled Dinner, but with a few more varieties of meats... As you might guess from the preparation, it's very comforting and satisfying, if not shooting off the same fireworks as some of the other dishes.

There are some fish preparations we haven't gotten around to yet, but we've made our way through most of the rest of the menu. I'm not sure how often things will change on the menu, but even if it doesn't for a while, I could see coming back and ordering almost anything we had, especially that Duck Rice... I don't think this menu would make a lot of sense in the summer, but it's almost ideal Fall and Winter food, so I don't care if it stays the same for a while...

Although we were full-to-bursting both times, we managed to find just enough space for a traditional dessert, the Pastel de Nata. It's a custard-filled tart, much like the egg tart you might get in a Chinese bakery, or off a dim sum cart, but larger and well, better! In the future, we really need to make an effort to show some restraint and leave room for dessert here, because Carla Gonçalves is a talented baker and pastry chef, and there are a few other items on the menu that sound good.

Prices are quite reasonable given the mammoth portions, but this place is not cheap on an absolute level. The larger plates start in the high teens, most are in the mid $20s. Starters are under $10, Salads about $10-ish. These strike me as very good values, especially when you could get away with ordering a couple of starters and then less than one large plate per person. But then, why would you want to do that!? The better plan is to order more than you think you'll need, and then you'll have leftovers.

And you DO want leftovers...