A few weeks ago, we talked the folks at Cochon into doing a tasting menu for us. We told the chef to do whatever he felt like, and we ended up with a fascinating meal, with lots of offal and other unusual ingredients, but which proved to be diverse and most importantly, delicious throughout. 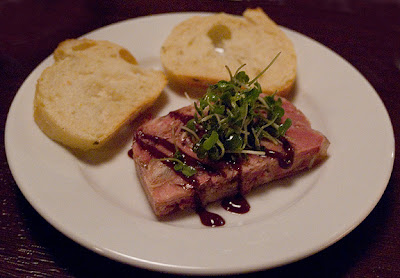 This was very meaty, and not nearly as gelatinous as I expected. With the peppery greens and tangy sauce, the flavors really jumped out beautifully. 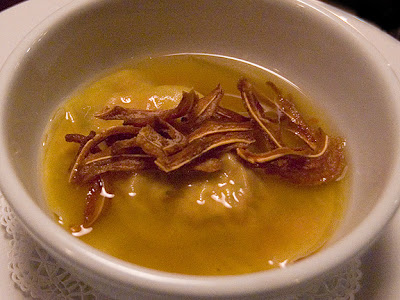 The pasta had a creamy, flavorful filling, which contrasted nicely with the vivid broth, which had a little kick of spice. The crunchy, chewy strips (of ear?) provided another pleasing edge. 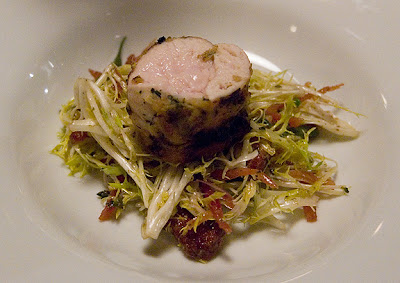 These might be the best non-crispy sweetbreads I've ever had, and rank pretty high for sweetbreads in general. The texture was creamy, but not gooey, with none of the pasty quality one sometimes gets. The acidic and bitter nature of the salad offset the richness of the sweetbreads perfectly. There was a bit of variation among the plates, some getting mostly hefty traditional bacon lardons, others getting more strips of sweet ham. The salty worked a little better than the sugary, but in either case, the porky overtone was quite complimentary. 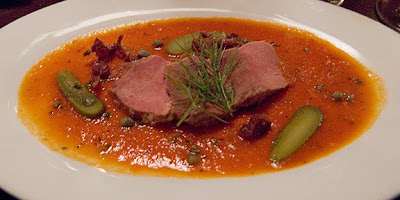 I'm not sure what I was expecting, but this dish was significantly lighter than I had anticipated. The meat was fork tender, subtly-flavored, and nicely paired with the tomato sauce and salty accents. 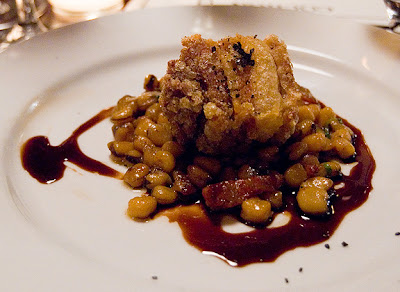 It may have been roasted at some point, but it was clearly finished in the deep-frier, lending it a bubbly texture and crunch. The fat layers had rendered-down nicely, so while it was not exactly lean, it was not a total fat-bomb. OK, it kind of was, but in a good way... The beans and crunchy pork jowl were good too. 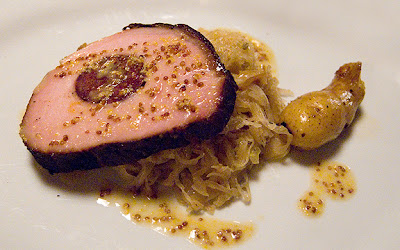 At this point we'd had SO much food that we probably could have skipped this one altogether and gone home happy, so I'm not sure any of us can assess this course properly. It was pretty good, and I think I might like it as an entrée some night, not as part of a tasting menu. Smoked and cured a bit, the meat had a firm texture and assertive flavor that was offset well by the kraut and the mustard. I feel like the blood sausage got a little lost in this setting, but again, it could be that my palate was just pretty burnt... I think a small portion of this might have been perfect early in the meal, perhaps alongside the headcheese.

Overall, the portions were pretty ridiculously large, and the chef knew it, but couldn't help himself! 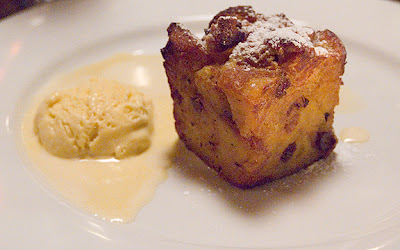 Somehow we managed to find some room for dessert. What, you thought we were going to turn down bacon ice cream?!? The pain perdu was more like deep-fried bread pudding than french toast, but had the requisite crisped-up custardy bread thing going on. The bacon component of the ice cream was subtle, but definitely there, and the maple brought it all together in a disorienting zone of sweet/salty/creamy/brunch/dessert. I'm completely in favor of that kind of confusion.

As I think the photos show, the food was significantly more varied than just reading the menu might suggest. Everything was quite tasty, and well-prepared. If I have any complaints it's that the portions were too big!

We're hoping to get chef Giuffi to do something like this again for us, but in the meantime, we're hapy with the regular menu and daily specials, which are not too different from what we got on the special tasting menu.
Posted by philadining at 2:22 PM No comments:

Marc Vetri dropped into snackbar as the guest chef for their (usually) first-monday tasting menu dinners. These events have created a nexus for some very cool collaborations, encouraging talented chefs to explore ideas that might not fly in their own restaurants, and to avail themselves of some of snackbar's signature edgy techniques. So this time one could find some parmesan foam on the arancini, some hot pepper jelly spheres lurking in the squid ink pasta, some cold sous-vide applied to the celery. But it was still pretty clearly Vetri food, just a little tweaked and rethought for this night.

Jeff Benjamin provided wine pairings (and beer for one course) that did a nice job of supporting and enhancing the food, adding to the thoroughly enjoyable meal. Look for notes on the wines, as well as the food, at David McDuff's Food and Wine trail. 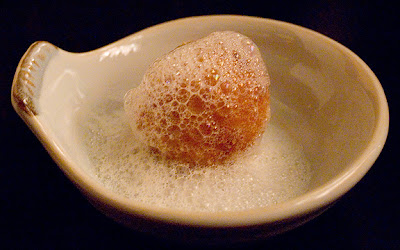 These were beautifully-executed arancini, the creamy interiors cloistering nuggets of meat, the exteriors retaining a perfect crunch, the foam adding just a hint of cheese. That froth was a textbook example of why foams are not merely stylish affectations, the form delivered flavor in a way a sauce or solid never could. 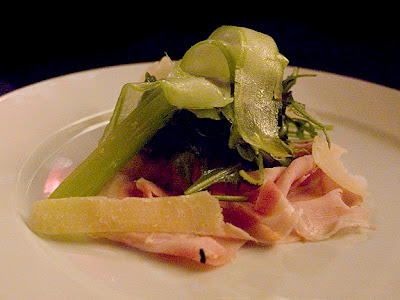 I was initially underwhelmed by this course, but as I managed to eat each element in combinations with the others, eventually experiencing the totality of the diverse flavors all at once, it won me over me completely. The bitterness of the greens lapping over the richness of the pork, the sweet edge of the charred radicchio superimposed onto the tartness of the dressing, the salt of the cheese balancing it all, it truly was a sum greater than its parts. 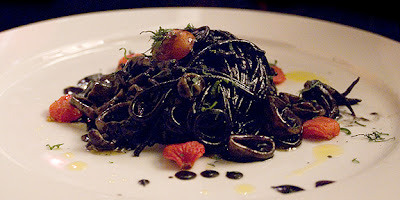 This course seemed to be a crowd favorite, many folks wistfully picturing eating huge bowls of it on a regular basis. And despite its drastic appearance, it was indeed a familiar and comforting dish, with tender squid tangled in the firm pasta, tiny oven-dried tomatoes providing little splashes of contrast. And every now and then, one of those tomatoes would turn out to not be a tomato at all, but a little package of peppery jelly, providing a surprising, and rather pleasant, variation. Hey we are in snackbar, one has to expect a few modern touches, even in the homey noodles.

This was one of my favorites of the night, the surprisingly mild eel amplified by the wild mushrooms, the sharp edge of the greens pulling it back from richness overload. 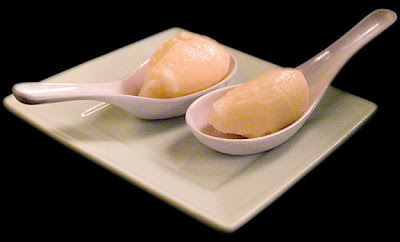 An effective palate cleanser, and quite delicious on its own, the only downside of this sorbet was that it lingered, making mischief on my tongue for quite a while! Still, I'd be happy to have this again, either as an intermezzo or as dessert. The campari's assertive bitterness played off the fruit components beautifully, making it a bracing and exciting transition into the final stage of dinner. 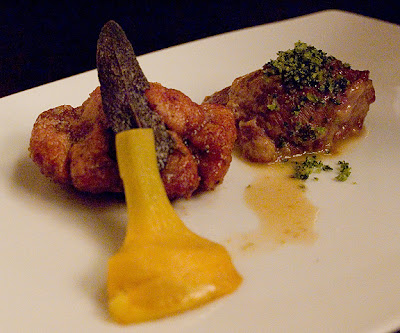 I heard a couple of comments wishing for crispier sweetbreads, but I thought mine were just perfect. I'm not sure I'd call them crisp, but the exterior had a great crust, revealing a melty, creamy interior. The veal cheeks were almost as luxurious, with that decadent gelatinous texture and intense flavor. I liked the bright citrus note from the gremolata dusted atop the cheeks. 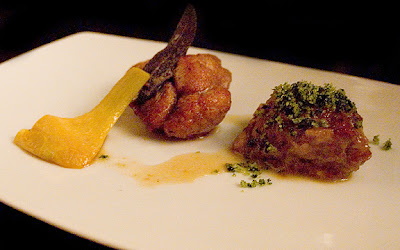 Unexpectedly, the dessert was one of the most fascinating courses, a riot of mysterious malty, funky, fruity, fermenty flavors in the cake, amplified by the honey. We cornered the chef and asked him about it, and he ascribes those effects to the chestnut flour, insisting that there was nothing weird in there. And I think I believe him, but I was tasting something (intriguingly) strange.

I'm not sure which of the lunatics decided that a marshmallow made with bitter artichoke liqueur was a good idea, but, well, OK, it was pretty interesting. I'm not sure I could eat a lot of them, but a small, squishy blob of it was kind of good. I'm not even sure I could parse the flavors in the macaroon, but it was tasty.

This was a very enjoyable and unique meal, certainly different than what one would get at Vetri or Osteria. Of course those places have set the bar rather high, and we routinely have enthralling experiences eating Vetri's food just dropping by Osteria on a random night. I don't think any of these dishes knocked us completely out of our chairs, but we liked this meal quite a lot, and enjoyed the deviations as much as the solid Vetri touch.

Could we all pause for a moment and contemplate what a cool dining scene we have in Philadelphia?

Big thanks to both Jonathans at snackbar for making these dinners happen, they're consistently interesting and enjoyable dining experiences. One often catches a glimpse of some unexpected folks poking their heads up from the basement kitchen: last night it was last month's guest chef Michael Solomonov, helping out his old boss before plunging back into his soon-to-open Zahav.

I'm not sure what's planned for next month, and I'm not sure I need to know. Just save me a space...