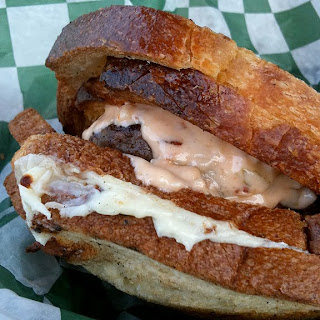 I'm not sure what triggered it, but all of a sudden, Philadelphia is awash in burger joints. Steven Starr's burger stand in Franklin Square has started its second season with a surprising lack of buzz,  a Rouge splinter-group started 500 Degrees with plenty of PR hoopla, and Bobby Flay opened a chain spot out in University City with lots of fanfare,  widespread derision, and almost certain success...

Apparently the burger zeitgeist was strong enough  Stephen Poses, of Frög/Commissary fame, would be lured out of catering mode to create a burger stand. They say they're going for a backyard-grilling vibe, and in some ways they've hit that target right in the middle, if your recollections of neighborhood barbecues includes the guy manning the Weber having some culinary chops.  The burgers themselves are plump, juicy and overall better quality than you'll find at your average holiday party.  They're grilled to order on charcoal, to an accurate medium, unless otherwise instructed, and despite lacking an assertive char on the outside, they have good flavor and rather amazing juiciness. 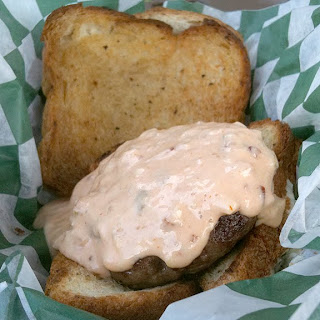 One can have a basic burger, or dress it up with good cheese or bacon, or, go to ridiculous extremes with the "LOVE Burger" (pictured above and to the right.) It's the signature burger, slathered with "special sauce" and  presented between two grilled cheese sandwiches. It sounded just crazy enough to be good, but in reality, struck me as too much of a good thing. Too much bread, too much cheese, too much grease, too much sauce, just too much.

I did enjoy the burger itself, so I might very well go back and just get the more conventional version, served on a Martin's potato roll. Good pickles, relish, pepper relish, and the expected condiments are provided, so one can customize pretty extensively.  Because the burgers are thick, and grilled to order, they take a few minutes, this is NOT a fast food experience.  But it's always worth the wait for something made fresh.

I don't think this new place threatens the burgers at Good Dog, The Royal Tavern or Standard Tap for the top rankings, but its location, outside, on the front lawn of the Franklin Institute, should make it a very popular destination for tourists this summer. It's probably a little more expensive and slower than many might expect, but at least the quality is high. 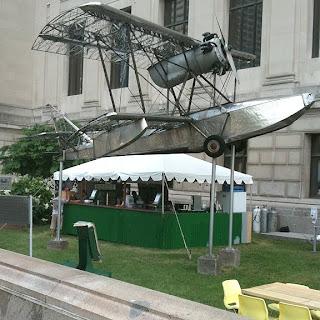 And perhaps most important, it also offers more than just burgers. The hot dogs are pretty straightforward Hebrew National beef dogs on Martin Potato rolls, nothing exotic, but they're split and  grilled to order, which happens to be my favorite way to have them. 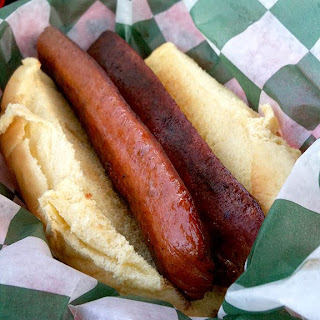 The Crab Roll isn't going to give anybody's Lobster Roll any real competition, it's just a basic, decent crab salad: crab, mayo, some veggies, lettuce, on a grilled roll.  Fine if you want something cool, or just don't care for burgers or dogs, but not worth a special trip.  There are also some unexpected and appealing menu items, like gazpacho, fried green tomatoes, and sangria.  Oh, and beer. 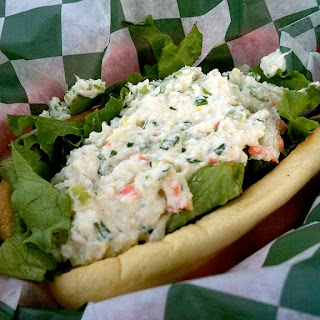 Perhaps the most exciting part about this stand is that they sell slices of their famous carrot cake, as well as the appropriately-named Killer Cake, which is one of the original, and best, chocolate-overload desserts.  They'll also mix either of those cakes into a milkshake, but I have to be honest, I don't get the appeal of chunky, cakey milkshakes, so I'll opt for a straight piece of cake.  Maybe a milkshake, made with Bassett's Ice Cream, on the side.

Is it a dramatic advance in the burger scene? Probably not, but it's a good idea to have something to eat right there, and especially nice that it's actually good, interesting, and well-executed. It's also trying to be environmentally-friendly, at least as much as possible when using as many disposables as they do.  Certainly worth checking out if you're in the area, or have a powerful jones for carrot cake, but perhaps not worth a long detour just for a burger.

Frög Burger
222 N. 20th St. (at the Parkway)
Outside of the Franklin Institute
Posted by philadining at 1:02 PM 4 comments: