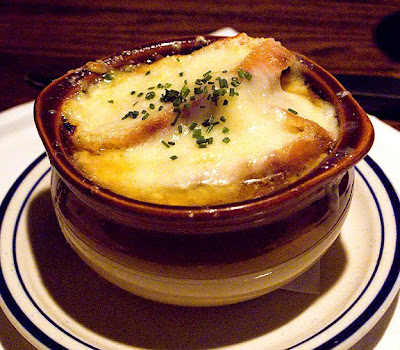 I'll readily admit it: I'm a snob about French Onion Soup. I do not like it when liberties are taken, especially the popular trend of using mozzarella and/or provolone for the cheese. This should be declared a culinary crime, and anyone using salad croutons as a support for the cheese, rather than proper toasts, should be subjected to a lethal injection of Lipton Cup-a-Soup.

I make a pretty respectable version of French Onion Soup in my own kitchen, and after myriad disappointments even in very good restaurants, I almost never order it out anymore.

But I trust Pub and Kitchen chef Johnny Mac, and when I saw this on their menu, listed as English Onion Soup, I was willing to take a chance. I was even willing to allow some slack, given that it clearly was meant as a riff on the classic.

And it is indeed an original interpretation: the rich broth is based on pork stock, rather than the traditional chicken or beef. Joining the expected caramelized onions in the bowl are large pieces of fall-apart tender chunks of pork. It's a surprising addition, but a good one. A couple of toasts hold up appropriate cheese. Most importantly, the whole package harmonizes perfectly. As the weather turns chilly, this is definitely going to be a go-to-soup. 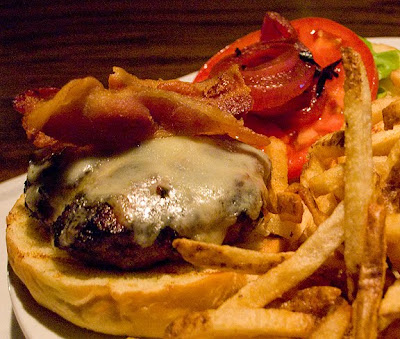 While at Pub and Kitchen, it's hard to resist their famous Windsor Burger, with homemade bacon and English Cheddar, on a very good brioche bun. I especially liked the pickled onion that accompanied the lettuce and tomato. The burger itself was juicy and very beefy, and the sum of all the elements places it high among my favorite burgers. The fries are good too, although they fade a bit as they cool...

The rest of the smallish menu has much worth investigating as well, just don't skip the soup...