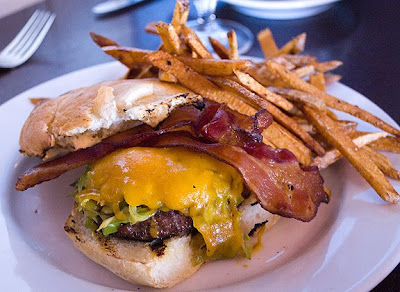 I'm not sure what it is about this burger that is so ...well... awesome. It could be the Neuske bacon, or the good cheddar, or the caramelized leeks lurking beneath it, or the light, toasted bun slathered with sherry-spiked mayo. But it's more likely the meat itself, moist and not over-handled, well-charred on the grill, still dripping juices.

The only downside is that it's only on the menu during Sunday Brunch (11am-3pm) and it's hard to resist the more traditional breakfast-oriented options. But it's worth skipping the glazed ham and eggs, the gargantuan pancake, the berry-covered french toast. Get the burger. 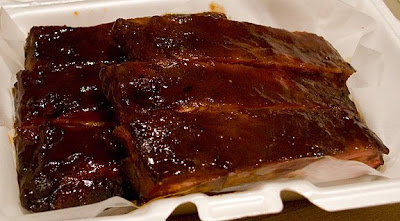 The first thing we noticed when we opened the take-out container from Dante's Barbecue in West Philly was how perfect the ribs looked. My friend exclaimed "wow - competition barbecue.." and that's exactly right: these ribs looked like they were being presented to a judge at a contest.

This is not a staged shot, Dante's didn't know we were going to take a picture, this is just how they were presented to two guys who called-in an order for ribs. Of course, meticulous slicing and saucing is not the most important thing about barbecue, but the obvious pride and care put into the presentation, right down to the symmetry of every single rib, seemed like a good sign.

And indeed it was.

These ribs had a pretty impressive-looking smoke ring, and a solid, consistent meatiness, no scraggly, tiny end bones (not that those aren't tasty too... ) These had been cooked to a perfect level - the meat was tender and juicy, yet much of the fat had rendered out. They were at that elusive stage where the meat was just barely hanging onto the bone: it wasn't sliding right off (a sure sign of over-cooking) yet it wasn't too hard to clean these right down to bare bones. Or maybe we were just gnawing them clean because they were so tasty...

The flavor built in an interesting way - the first few bites didn't seem especially smoky, but by the end of a rib, there was no doubt about the cooking technique, the woody flavor was actually quite pronounced, but it was a subtle, cumulative sensation. These are undoubtably among the best barbecue ribs I've had anywhere, and certainly my current favorites in Philadelphia.

For the sake of comparison, we also got a half rack from Tommy Gunn's, but it wasn't even close. Perhaps we're being too fair, but both of us immediately declared that we'd had much better ribs from that place, so we're going to have to try the comparison again. If we can manage the logistics, we'll try to get some from Sweet Lucy's too, to do a side-by-side comparison, but if Dante's can maintain this level of execution, they're going to be hard to beat... [UPDATE: we DID go to Sweet Lucy's and Dante's wins by a wide margin.]

Of course there are a lot of places in Philly selling "barbecue," but there aren't too many doing serious long smoking. That's not to say that the more common par-boiled and grilled ribs aren't tasty, but there's a particular flavor and texture that develops from the long, slow smoking process that elevates that style into a whole other category.

These were their St.Louis style (pork) spare ribs, with a mixed sweet/hot sauce, which was quite good (and not applied too liberally.) They also offer dry-rubbed Memphis-style baby back pork ribs, as well as beef ribs. 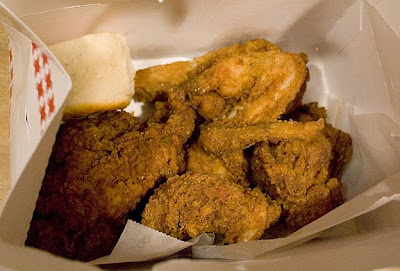 There's also pulled pork, brisket, even smoked hot sausages! They even do fried chicken, and we happened to be jonesing for fried chicken, so we tried a few pieces. It was well-made, nicely crispy and juicy. The spicing was not especially noteworthy, so we wouldn't call this destination fried chicken, but it's solidly good. But if the rest of the barbecue is as good as those ribs were, there's no good reason to waste stomach capacity on fried chicken here...

We only tried a couple of sides, but we found the collard greens to be quite excellent. They weren't all tarted-up and disguised, nor were they cooked into a mush. They still had some recognizable leafy structure, yet were tender. The flavor was, well, they tasted like greens, a hint of bitterness, and a pleasingly salty undertow that made us wonder if they had been cooked in broth, or some such hearty liquid. Or maybe it was just salt... In any case, they were very good. 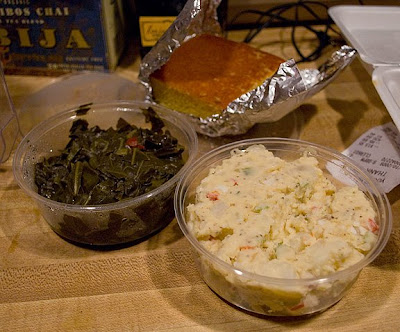 The potato salad was fine, maybe a bit strong on the celery seed. Cornbread - hmmm... cornbread... you know, we had a lot of ribs and chicken to eat, we didn't get a chance to even try the cornbread.

So, again, it's probably premature to start handing out trophies, but this place is definitely a contender, and worth checking out if you're into smoked barbecue. It's take-out only, I think it's cash-only, and it's way out west on a somewhat dismal stretch of Lancaster Avenue, but it's worth the trip. The place itself is clean and seems to be well-run. And it smells great in there... 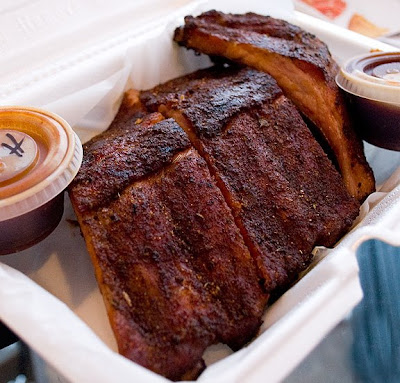 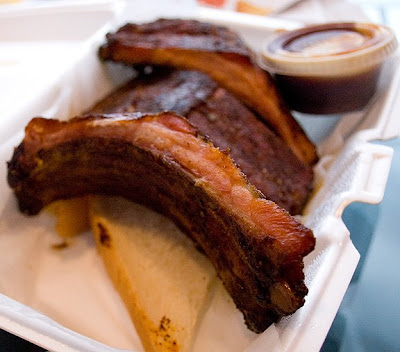 We made a second stop at Dante's to check out more of their offerings, and the news is mostly good! We tried the Memphis-style dry-rubbed baby back ribs, and while we didn't like them nearly as much as the larger St Louis-Style spare ribs, these smaller ones had gotten a bit dry and almost over-smoked, the flavor was still quite intense, with strong spicing and deep smoke. We've never really loved baby backs in general, preferring larger, meatier bones, but we might give these another try, just to see if this is the baseline. The texture wasn't nearly as pleasing as the spare ribs, but the flavors were quite nice. 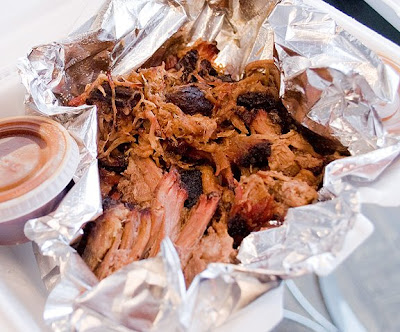 We were happier with the brisket, which at first glance looks a lot like pulled pork, but it tastes like brisket. In a perfect world, I'd prefer Texas-style slices, but I'll be satisfied with shreds and chunks if they're this tasty! 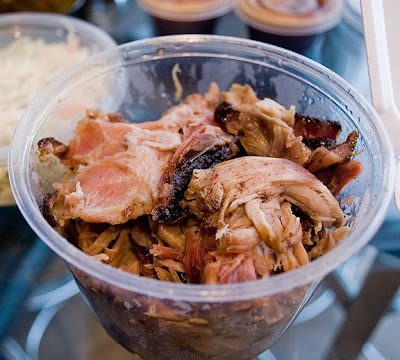 I think the star of this visit was the pulled pork. This was just about perfect, with a bold smoky flavor, and wonderful moist texture. We felt no need to put any kind of sauce or condiment on this, just eating it straight from the container. I suppose it would make a nice sandwich, but I'm reluctant to dilute the intensity of the porkiness with bread... 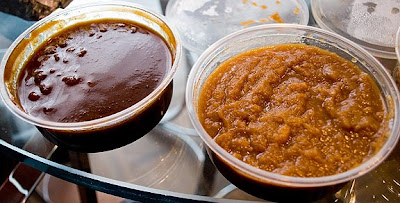 We sampled a few more sides too, and they were all fine, but none were as outstanding as their collards are. Sweet potatoes look a bit brown and blah, but they're nicely spiced, and not over-sugared. Baked beans taste mostly of barbecue sauce, and are a little soupier than we prefer. Cole slaw is a pretty standard version, it's fine. Green Beans are OK, but are not too far away from what you could get out of a can...

But the sides are just that, side shows for the mainstage of the 'cue, and that feature presentation is pretty impressive. We've still got some more to try, and we're definitely going to revisit both kinds of ribs (they also have beef ribs, but my crowd generally will only eat a beef rib out of desperation, if all the pork ribs are gone!) We're very happy to see that, although there's always going to be some day-to-day, hour-by-hour variation, our results have so far been very strong, this is feeling like a contender for THE spot for serious wood-smoked barbecue in Philly.