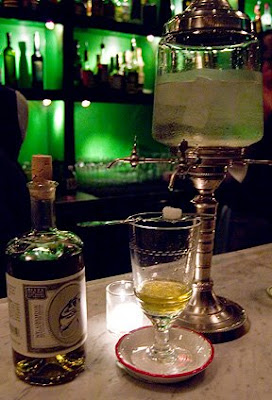 Update: Apothecary changed its name to APO, and then closed...  Bartender Nick Jarrett can be found behind some great bars in Brooklyn, such as Dram and the Bushwick Country Club.   Southwark is still a great spot for cocktails from Kip and Paul, although you can find George Costa up at Pub and Kitchen more often these days.  Katie Loeb has left Chicks, and is currently around the corner at Tapestry.

Until recently, my feelings about Apothecary, much like their drinks, had been mixed. After a few rocky experiences early on, I'm happy to report that I think I finally have figured out how best to approach this place.

As with many serious drinking destinations, it's ideal to sit at the bar, and put yourself in the hands of the bartenders. Second-best at this place is to score a seat on the lovely roof deck on a warm evening, and order classic cocktails. A distant third is to sit at a table, and order from the drink menu. In fact that third is so distant that I don't think I'll do that any more, but I'll look forward to sitting at the bar here any time there's an open stool.

It had been suggested that the opening of this new-ish bar on 13th street marked the arrival of modern cocktail culture in Philadelphia. Of course there have always been talented bartenders in Philly, and some of them have been championing the cause of the cocktail arts, but the city didn't have a bar completely devoted to mixology. That buzzword is meant to signify an approach to bartending that treats making drinks more like the work of a chef: use of fine, sometimes obscure ingredients; employing creative new recipes and techniques, perhaps involving homemade extracts, syrups and tinctures; devotion to fresh citrus and good ice; mastering the classic cocktails, and knowing their history. New York City has its Pegu Club, PDT, Death and Company and others, but Philly had nothing quite like that.

Southwark has been our closest contender. They've long championed the cause of the classic cocktail, and Kip and George's devotion to crafting fine drinks is admirable. But they're traditionalists, and don't get into the edgy, experimental, cutting-edge stuff. That's perfectly fine, they do what they do so well I'd never want them to change. For what it's worth, they won a Best of Philly Award this year for "Best Traditional Cocktails."

This year's Best of Philly for "Inventive Cocktails" went to Chick's Café, with particular mention of bartender Katie Loeb. In addition to being a personal friend of mine, Katie is a serious cocktail artist, creating new drink recipes, concocting her own ginger beer and lemon cordial and rhubarb purée, or whatever it takes to make some intriguing new libation. There are also a few good cocktail lists around town, the Garces empire in particular (Amada, Tinto and Distrito) has some very interesting drinks at the bars, but Philly had no places devoted explicitly to the art of the cocktail.

I've been to Pegu Club, PDT and a few of the other cocktail destinations in NY, and had thought that concept would work in Philly. So I was very excited when Apothecary was announced. 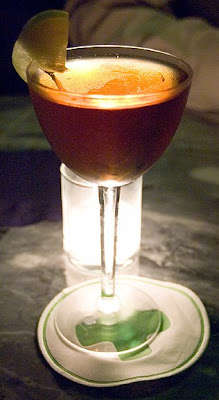 So I stopped in with some friends shortly after they opened, and my first impression was good: my Corpse Reviver #2 was just right, the citrus and gin in perfect balance, a whiff of anise adding depth. Sadly, my friend's Aviation was out of whack, overly bitter and medicinal. But we presumed that was an aberration, and decided to sample a few more drinks from the menu. Unfortunately, our experiences leaned more toward the Aviation than the Corpse Reviver. Running through the cocktail menu, we found interesting, but over-complicated drinks, each comprised of a dizzying array of ingredients, many of which were bitter, or strongly herbal, or harsh in some way. Another visit a few weeks later with a completely different crowd elicited the same reactions. The looks on everyone's faces were more of bewilderment than of enjoyment, not what one hopes for when enjoying a drink.

But people I trust had told me good things about their experiences, so I felt sure that there must be charms I hadn't found yet. On a third visit, we went off-menu and just ordered classics: A Sazerac, a Ramos Gin Fizz, a Pimm's Cup. And these drinks were all quite good, executed with obvious care.

A fourth visit was mixed. The classic cocktail tactic worked again, but a request for a single serving of something resembling one of their "bottled cocktails" resulted in a strange, muddy, bipolar drink, one that would be happy and engaging one minute, then suffer a moodswing and lash-out with acrid spice and contradictory arguments the next.

So it was with some trepidation that I returned yet again. But this time I was with the above-mentioned Katie Loeb, and we vowed to only sit at the bar. She's friendly with both Nick (the bar manager) and Christian (bartender) and they of course know that she's a good audience for their mixological skills. That said, observing the experiences of the customers sitting on either side of us, I'm not sure we got much special treatment, everyone at the bar that night was getting a great deal of personal attention, resulting in drinks customized to their particular taste, along with exhaustive explanations of both recipes and individual ingredients.

This experience was a delight, unquestionably the equal of any I'd had at the storied bars in NY. All the drinks were amazingly balanced, nuanced and complex, without any of the harsh weirdness I'd experienced on previous visits. In fact the drinks were so good that I'm still having a hard time understanding how both extremes emanate from the same bar. It's common to witness the bartenders doing a quick dip of a straw to double-check the balance of a drink before it goes out, often followed by a small adjustment, so I can't imagine how we had previously gotten drinks that nobody in our group enjoyed.

The easiest explanation is that I simply don't care for the drinks on their menu. I do think that's most of my problem with them, I find most of their signature cocktails to be overly-busy, with too many elements competing for attention. I tend to like bitter flavors, yet I find most of their original drinks to be unpleasantly acrid. Asking Nick to mix up something off-menu elicited the exact opposite result: an assertive, bold drink, that was intriguing rather than off-putting.

At this latest visit, I was amused by a bottle of Kaiser Kummel Caraway Liqueur that Nick had shown us, so I asked him what he'd make with that. With no hesitation, he suggested a "Weeper's Joy" which combined that cordial with Vermouth and Absinthe. He apparently tweaked the proportions from the traditional recipe, to good effect, because this drink was perfectly balanced. I'm eager get this again, except that it might be even more amusing to see what other recipes involving caraway liqueur Nick has filed in that encyclopedic memory of his... 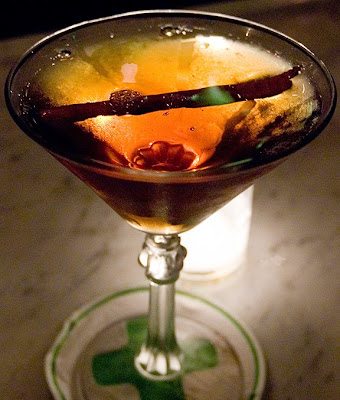 A little later, the Réveillon came up in conversation, so I asked for one of those, and this one nearly knocked me off my stool. It's an amazingly complex drink, full of spices and smoke, perfectly evoking a fall day, or as the originators intended, a Christmas celebration. But I'll take one any time, despite the evocation of autumn leaves and pie spice, I could drink this year-round.

This experience just confuses me further about why the menu drinks annoy me. Both of these cocktails are aggressively bitter, herbacious and complicated, yet I found them delightful, seductive and inviting. So why do I find the Tippling Bros. Magical Pain Extractor, The Sage Wisdom, the Two Sheikks "Al Ikseer" so off-putting?

My understanding is that these drinks were created by, or at least with, the Tippling Brothers, well-known itinerant drink consultants. So perhaps I simply don't share their aesthetic preferences, or maybe the bartenders just use a slightly heavy hand with the edgy components of those particular drinks. Whatever the explanation, I don't think I'll bother with the menu any more, I'm convinced that the best tactic at this bar is to avail yourself of the knowledge and skill of the bartenders, and have them make something customized for you. 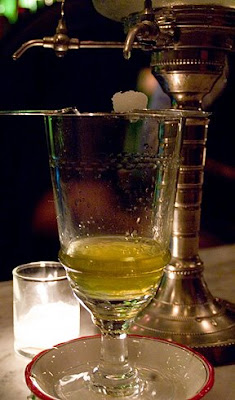 That's not to say that you can't have a good traditional cocktail here, I've had a few excellent Sazeracs here, and while Kip and George at Southwark remain the masters of that particular cocktail, the Apothecary version was not far behind. Simple drinks, even straight-up liquor, can be a good choice simply because they stock such a deep collection of fine, often hard-to-find bottles. They're a little light on Scotch, but otherwise have an impressive array of liquors from around the world.

Absinthe has been coming back in vogue recently, both as an ingredient, and as a drink by itself. Apothecary is a good place to sample it, if you're a fan, or even simply curious. They have traditional fountains, and a wide selection of Absinthes, so with a little patience, you can experience this drink as you should. The equipment aids the development of a milky, swirly louche, a result of the slow drip of water through sugar. And don't hurry, a bit more water even after the sugar has dissolved seems to create an even more velvety mouthfeel. The process is half the fun, so relax, write some tragically sad poetry or something...

This reminds me of my remaining quibble with the place. As enamored as I am now with the bar, and with the delightful roof deck, it's overall not an especially inviting space. It's loud, the spare, hard surfaces making for an echoey clatter. The green lighting is not especially flattering, and the front part of the first floor has all the charm of an office cafeteria. The tables are too high, the chairs too straight. The second floor feels better, but is still too green.

Regardless, I'll put up with it, because finally, I'm a fan of this place, and look forward to many more visits. I'm glad I gave it a few chances, it took a while for its charms to appear, at least to me. Sadly, I think I may have to only go on slow nights when I have a chance to sit at the main bar.

There's no need to be intimidated by the arcane trappings of the Mixology movement, it's not all that complicated. Just tell your bartender what you like, and take it from there. Bars like Apothecary, Southwark and Chick's are not about creating the next cutely-named sugary drink that will become a sensation with the masses, they're about building on a long tradition, making delicious, complex, balanced libations based on quality ingredients. Go in with an open mind, and either order something from their cocktail list, or ask for your old favorite, just don't be offended if the bartender tries to gently steer you toward something else. In the same way that getting a burger at a four-star restaurant might be squandering an opportunity, ordering a vodka tonic is wasting the skills of the bar staff at places like these. So try something new, you may be pleasantly surprised.