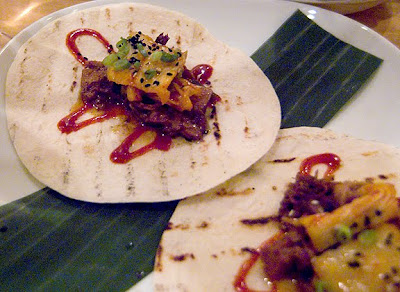 Two words lured us into Meritage recently, and they weren't the two that have been getting all the attention around town. The restaurant has gotten significant buzz for serving Korean Tacos, a culinary meme that has evolved from a lunch truck fad in Los Angeles to an almost required menu item at an edgy restaurant in 2010. And don't get me wrong - the Korean Shortrib Tacos are delicious - its a great concept, and well-executed here, but it was another evocative phrase that motivated me to finally visit this restaurant that's been receiving excellent notices since a recent shift in kitchen staff:

I've long wondered why Chinese sausage hasn't dominated the contemporary food scene like bacon has. It has the same appeal: it's porky, fatty and sweet. In fact most popular versions are sweet enough to outshine the hedonistic appeal of bacon, its candied meat character serves as a wonderful accent to many dishes. There was even a restaurant in University City in the mid-1980s that put it on pizza. But one rarely sees it used as an ingredient, even in Chinatown. It might pop up as one of the ingredients in sticky rice, or occasionally in a steamed bun (oh, how I miss Lakeside) or as an accompaniment to Chinese Broccoli, but it's got huge potential outside of traditional Chinese dishes. 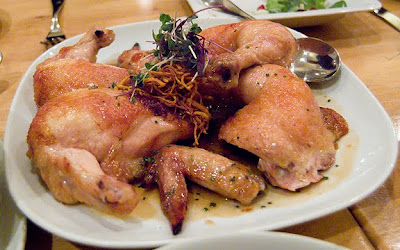 Imagine our excitement when we see a description of a Roast Chicken dish at Meritage that reads: "Brined and Roasted Giannone Chicken with parsnip puree, sauteed brussel sprouts, chinese sausage and a star anise chicken jus." That was just enough of a prod to get me, and a few friends, to finally visit Meritage.

The irony is that the Chinese Sausage is a minor bit-player in this dish: a few slivers flavor the brussels sprouts. Regardless, all of us swore we could detect a certain sausagey perfume permeating the bird. That was probably all an artifact of our preconceptions, and ultimately it didn't matter - the chicken was delicious, as were the sides of parsnip purée and the sprouts studded with sausage. 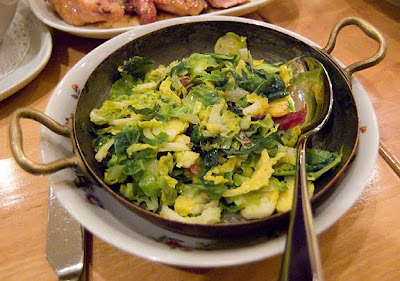 We were pleased to discover that most everything else was too. There's an extensive selection of snacks and small plates, so we decided to get several of those, along with the special tuesday "date-night" version of the chicken, basically a special-priced whole chicken, which constitutes a double-order of the entrée that's on the regular menu.

Chef Anne Coll has invigorated this place with exciting Asian-fusion touches that avoid the pitfalls of this sometimes tired idea. Instead of vague references to Chinese and Japanese flavors or perfunctory drizzles of oyster sauce, soy and ginger, Meritage's menu features creative updates and twists on traditional Eastern ideas.

Of course, there are her famed Korean Shortrib Tacos, which first got attention when she made them at the restaurant Ansill in its later days, and they stand up to all the hype. I would probably have liked a tiny bit more filling (or smaller tortillas) but the flavors were in perfect balance - the slightly smoky charred meat, the sour, spicy bite of kimchee, the sweet spice of the sauce. For some crazy reason, in the future these will apparently not be available every day, perhaps offered once a week. This is ridiculous: they're fantastic, and fit-in perfectly with the modern Asian-fusion tilt of the menu, so I certainly hope they come to their senses and just offer these every day. Perhaps we could start a petition... 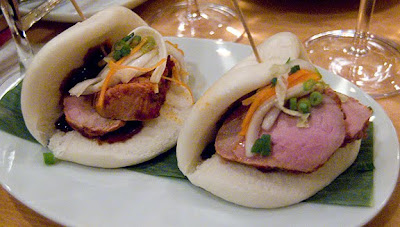 Before the Korean Taco, the previous big Asian culinary fad was the pork bun, usually a slice or two of fatty pork belly in an airy steamed bun. That idea has finally proliferated around Philadelphia, but most versions we've encountered have come up a little shy of the ones we've had at Momofuku in NY. Meritage has their own take on them, using a beautifully lean and tender piece of pork tenderloin. It's a good interpretation, and while not quite as rich and indulgent as the more common pork belly, we liked them a lot. But then they might have been overshadowed by the grilled grape leaves, stuffed with Kobe beef, or the pan-fried Foie Gras dumplings, or the plate of lightly-pickled vegetables, or the bowl of sweet, fresh mussels bathing in a coconut curry sauce. It's a testament to the vibrancy of those dishes that we yawned a bit at the lamb chops. The meat was actually quite delicious, perfectly grilled, juicy and tender, and would probably have been quite a hit in another context, but beside these other dishes we couldn't help wishing for a little more something.

Salads, one with beets, another with mixed greens, were nicely done as well, with meticulously fresh ingredients.

We tried a couple of desserts, which were fine, but we were really too full to give them a proper assessment.

Service was very friendly and attentive, and by the end of the meal we were already making plans to return. If we had any criticism of the restaurant, it would be that the decor, while quite lovely, feels out-of-sync with the menu. The rooms are whispering cozy French countryside, while the food on the plates is yelling modern urban multiculti chic. It's not going to dissuade us from going back, but we couldn't help thinking that the kitchen and the dining room belonged in two different restaurants.

Next time I'll just keep my eyes on the food, and quietly start that petition for universal access to Korean Tacos. Update: the food has changed at the Franklin, now supervised by the folks at Supper, there's a wider variety, but sadly, no more duck fat chips...

We tend to shorthand the real name of this place, just calling it The Franklin, but just to be clear: no, we don't mean the Franklin Fountain ice cream parlor, we're talking about the cocktail bar named the Franklin Mortgage and Investment Company.

You could be excused for confusing the retro design of both places, and the and fashion sense of their respective employees, but their products are pretty different. Although... I wouldn't be opposed to seeing what would happen if they joined forces...

The real reason to come to the Franklin Mortgage and Investment Company is for the cocktails. In what has become a pleasingly creative cocktail scene here in Philly, The Franklin can probably still be considered the top spot in town, although spirited competition is being provided by Village Whiskey, Chick's, Southwark and APO, as well as the bars at Noble, Oyster House and a few others.

All of these places have strong points, and I might prefer any of them at any given moment, but the Franklin has the largest original cocktail list, an impressive collection of spirits, and consistent talent behind the stick. Not only are the bartenders extremely knowledgeable, but the servers are too: in fact most times your servers are the bartenders, they tend to cycle out from behind the bar onto the floor, so you can get the same advice and personal attention out at a table as you can sitting at the tiny bar. There are many very interesting cocktails on the menu, but even better, this crew has a seemingly limitless repertoire of recipes old and new, so don't be reluctant to have them make you something not on the list. They're good with the classics, and perhaps even better coming up with something surprising and new based on your likes and dislikes, maybe even your mood at the moment.

Strangely, the excellent cocktails aren't the reason I'm posting an Awesomeness Alert. When the bar first opened, we were chronically longing for salty snacks, in fact there was no food at all. There's still not much, but now you can actually get a respectable cheese plate, some crazy-spicy nuts, or the subject of this alert: Duck-fat fried potato chips.

Potatoes, salt, duck fat. What could be bad about that? Oh, right, the duck fat french fries a couple blocks west at Whiskey Village are weirdly disappointing, unless buried under shortribs and cheese. But I'm happy to report that these potato chips are everything you wished WV's french fries were: perfectly crisp, assertively salty, and shrouded with a mysterious cloud of duck-fueled richness. They're also dangerously addictive. So, I'm sorry for telling you about them: your fat and salt intake levels are very likely going to spike in the near future.

$5 for a few ounces of chips might seem extreme, but you'll think it's worth it, and probably order another bowl, even though your cardiologist would probably recommend stopping at one. They're pretty great on their own, and somehow they make the drinks taste even better. Not that we really needed any encouragement to drink more at the Franklin...

The Franklin Mortgage and Investment Company
112 South 18th St (between Sansom and Chestnut)
http://thefranklinbar.com/
Posted by philadining at 10:57 AM No comments: