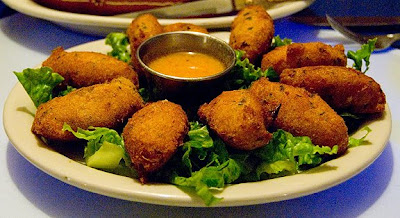 It started as a quest for Peruvian Chicken. That particular style of rotisserie chicken, marinated and roasted in a specific way, has been quite popular in New York for a while, but hasn't seemed to make inroads in Philly. But we'd heard it was available at El Balconcito in Northeast Philly. So we trekked on up, thinking that some roasted chicken and ceviche would make for a nice light dinner. We should have known that we're fundamentally incapable of ordering a light meal, but even keeping that in mind, we were unprepared for the banquet that resulted.

First, we'd forgotten that El Balconcito is more than a Peruvian restaurant, it's also Portuguese. The menu is divided in half, and there are extensive options from both country's traditions. Second, given the reasonable prices, we significantly underestimated the portion sizes, and therefore drastically over-ordered. Not that such behavior is a bad thing... 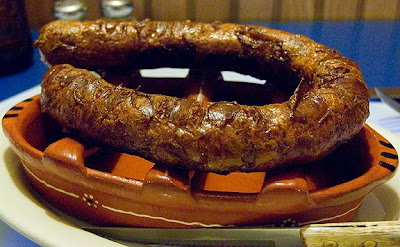 We started on the Portuguese side of the menu, ordering Croquettas de Bacalao (above) and Chorizo. The croquettas did not have an especially assertive salt-cod kick, tasting more of potato, but they were so ethereally light, with a perfect fried crunch, that nobody was complaining. The chorizo was served over a dramatic blue flame, which sadly didn't show-up in the photo, but did add an appealing fresh crispiness to the moderately spicy sausage.

But, let's not lose sight of why we came: rotisserie chicken. We tried to order a whole chicken, but our waitress launched into a long and involved story in rapid Spanish. Did we mention that none of us really speaks Spanish? We can pick out a few words here or there, and know just enough that we can usually stumble through ordering at restaurants, but we were having a hard time following this story. But we did sort out that there was no rotisserie chicken, and even figured out that one has to call ahead for it. We later asked, in very stilted Spanish, when we would need to call, and got a very long and complex answer, from which we extracted the word mañana, so we're pretty confident that one needs to call a day ahead.

There did not seem to be any English-speaking waitstaff, but our server was very nice, and we did fine with some pointing and simple yes-no answers to a few things we could understand: "picante?" "Si!" 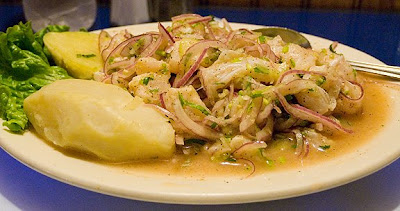 But, OK... no chicken... we can handle it, there's plenty on the menu that looks good. When in Peru, what else would one get? Ceviche of course. We ordered a basic fish version (as opposed to mixed seafood) and were unprepared for the HUGE pile of it that arrived, accompanied by a potato and sweet potato. It was very tasty, but would easily have served 8 people. The three of us made a good dent in it, and even used some of the vibrant, spicy, citrusy marinade as a condiment for a few other dishes, but we just couldn't finish it.

Another Peruvian specialty is Lomo Saltado, a stir-fry of beef strips, onion, tomato and french fries. It's pretty strange: the fries are soggy with sauce, the spicing is pretty subtle, and yet we came close to finishing it off, it has an inexplicable appeal. 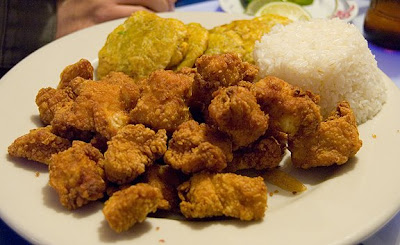 As a consolation for not getting the roasted chicken, we tried the Chicharones de Pollo. While not anything especially unique, they were very tasty chunks of fried chicken, both greaseless and juicy. One could choose two accompaniments, and not having perceived how carbolicious the meal as a whole would be, we chose rice and Tostones. The fried discs of plantain were good, although we ended up using them as accompaniments for some of the other saucier dishes, rather than as partners for the chicken.

Finally, we headed back to Portugal for what was perhaps our favorite dish of the night: a stew of Pork and Clams. You can't actually see the pork in this photo, but there was a ton of it hiding below the clams, pickled vegetables, olives and crisp roasted potatoes. All were luxuriating in a rich brown sauce, which complimented the tender cubes of pork beautifully. This is comfort food at its best, and a huge portion for under $15. 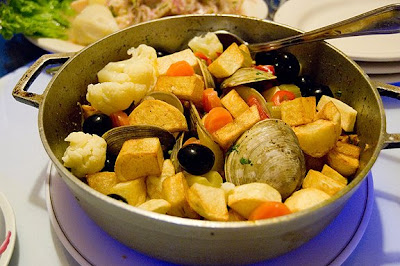 We accompanied everything with a few Peruvian Beers (Cristal and Cusquena) and still got out for not a lot of money. I think we paid about $90 (pre-tip) between the three of us, and we took about half of the food home.

So now we know: order a chicken a day in advance, and order about half of what you think you want from the rest of the menu. Oh, and we need to brush up on our Spanish...

There's been a lot of activity in Chinatown lately, with a few noteworthy openings and renovations. The corner of 10th and Race is looking much better these days: the old Ho Sai Gai is finally being fixed-up, but even more exciting, a couple of doors away at 1004 Race, Ken's Seafood Restaurant has opened.

Some of us know Ken from Xiao Guan Garden, where he guided us through the best parts of that restaurant's menu. The selections available at the new place are not exactly the same, but similarly there are fresh fish, still swimming in tanks, and other traditional Cantonese dishes. The tanks hold a few different kinds of live shrimp, dungeness crabs, lobsters, eels and several species of finned fish, and there are clams, scallops and oysters on offer as well. The menu also offers such splurges as shark's fin soup, and abalone.

There's a diverse English-language menu with plenty of traditional items, and a smaller one written only in Chinese, and even better, if you can convince Ken that you're really interested, there's even more that the kitchen can do that's not on any menu. Although one can order pork, beef, chicken and duck, seafood is a good place to start here. Whole fish can be simply steamed with ginger and scallion or sauced more aggressively, I find simpler is better with such high-quality, ultra-fresh fish. Just be aware, this live seafood comes with a price: a good sized whole fish may cost between 20-30 dollars, the exact amount determined by weight. But it's worth the cost, the freshness is so evident that afterward you may only crave seafood that is still swimming when you order it. 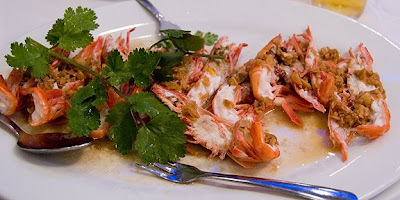 Most seafood can be prepared various ways, ask for suggestions and pick whatever sounds best to you. Ken recommended some very large, red, live shrimp gently steamed with garlic. Prepared that way, they were sweet, tender and delicate. There are smaller, almost translucent shrimp that are good salt-baked.

There are clam dishes that one doesn't see too often at other restaurants. We sampled ribbony clam bellies, stir-fried with yellow chives. 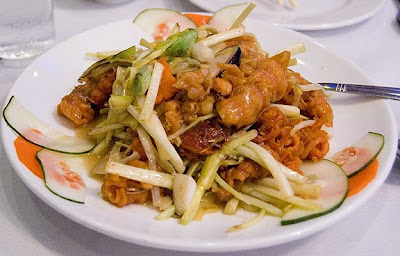 Even better were Razor Clams, Hong Kong style. The long, thin clams were just barely cooked to an ideal tenderness, joined by crumbles of salty pork. 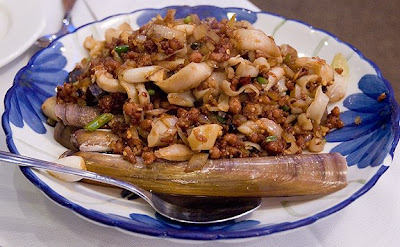 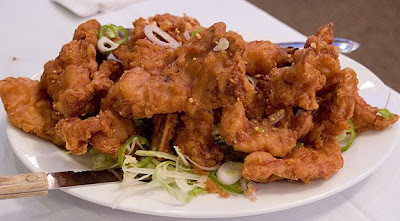 We were still feeling a little carnivorous, so we asked for Salt-Baked Porkchops. The chops arrived hot and juicy, a light, crispy coating carrying some salt and pepper, creating the impression of a perfect fried chicken. It was quite delicious just like that, but we were also offered a small bowl of soy spiked with hot peppers that added an interesting spin. Although this is primarily a seafood restaurant, they clearly do some good work with pork, and we saw a duck going by that caused us to contemplate distracting the waiter and claiming it for our own. There were several deep-fried dishes going to different tables, and judging from the pork chops, this chef knows his way around a frier.

To help celebrate his opening night, Ken sent us some plump, fresh oysters, and they were great, simply adorned with just the slightest drip of lemon. 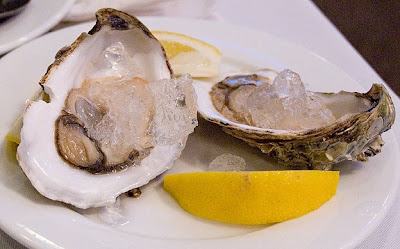 Also worth noting was the house special soup, which had a deep, rich flavor, sweetened a bit by lotus root and some fruit. 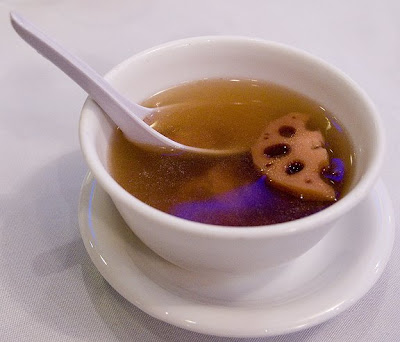 If opening night is any indication, we've got another excellent choice in Chinatown, serving serious, traditional Cantonese food. Ken's is BYOB for now, expect a liquor license eventually. If you've got a large group, or are in the mood for a party, there are three private room upstairs, each fitted with a high-tech karaoke system and large flat-screen video monitors. We'll skip the off-key singing for now and concentrate on more of the pitch-perfect food emerging from this kitchen.

Posted by philadining at 3:13 PM No comments: