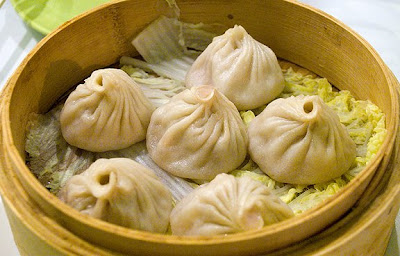 It has somehow become my role in the Philadelphia dining community to shoot-up a signal flare whenever Xiao Long Bao are spotted in the area. I'm pleased to say that I can report another spot that offers the delicate "juicy buns" and not only that - they just might be the best yet.

The high quality of these dumplings shouldn't come as a surprise: the new-ish restaurant Sakura, at the corner of 11th and Race in Chinatown, is run by former partners in Dim Sum Garden, where the local mania for Xiao Long Bao was stoked. Although there were several dishes from Shanghai on Sakura's opening menu, the XLB are more recent additions, announced on a hand-writen sign on the door. We're told a new menu is imminent, featuring even more regional Chinese specialties, and these will surely be on it, but don't look for "Soup Dumplings." Like at Dim Sum Garden, they're referred-to as "Steamed Juicy Buns."

There are three varieties: one with pork, one with pork and crab, and one with shrimp and pork. We've sampled the plain pork, and the pork and crab, and they're really outstanding (we slightly prefer the plain pork.) The wrappers are paper-thin, but display significantly better structural integrity than those at Dim Sum Garden. We haven't had a single one rupture or tear, a frequent problem at Dim Sum Garden. They might be a little smaller than the ones at Dim Sum Garden, but larger than Zhi Wei Guan's, and come 6 to an order (as opposed to 8 at DSG and ZWG) but these seem in perfect balance. The skins are tender, yet strong, holding in just the right amount of broth. That soup inside is less salty than many other versions, but comes into perfect balance with a few drips of the gingery sauce that accompanies.

It's pretty amazing: not long ago, Phiadelphians would bemoan the lack of XLB in local restaurants, and now we have three places that serve good ones. 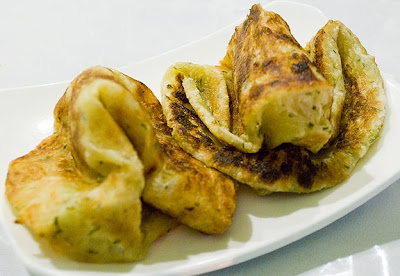 The even better news about Sakura is that there's much more worth exploring on their menu. Of particular note is their Scallion Pancake, which threatens to overshadow the Xiao Long Bao as a seductive snack. This version is airy and flaky, not the crunchy puck we've gotten used to at other restaurants. They're still a little oily, but seem more buttery than greasy. There are two versions, regular and onion, neither of which tastes very much like scallions, but they're so good that it's easy to not care.

There are lots more interesting things on the menu, along with some of the same-old Chinatown standards, it will be interesting to see if the new menu tilts more strongly toward the traditional Chinese styles. Although they offer several spicy dishes typical of Sichuan, I think the kitchen is stronger in the realm of the foods from Shanghai. 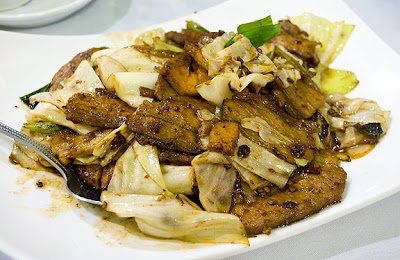 That said, the Double-Cooked Pork was tasty, if not especially spicy. Tender slices of pork belly were stir-fried with cabbage and chile sauce, which gave a bold flavor, but not a lot of heat, and none of the tingly sensation that comes from Sichuan Peppercorns.

The spicy dishes we got on an earlier visit were good, but they're not going to challenge the versions you can find a few blocks away at Four Rivers, or Szechuan Tasty House, or out in the 'burbs at Han Dynasty.

You'll have better luck here with the Shanghainese dishes, like the Braised Pork Shoulder, the Lions Head, or some of the dishes with Rice Cake. 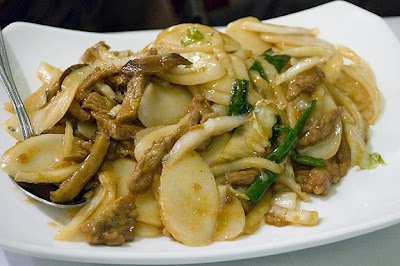 We tried the Fried Rice Cake with beef. It's mild, but the chewy texture of the noodle-like discs of rice cake along with a little crunch from cabbage an onion make this a nice subtle comforting dish.

I hope to see more homey dishes from Shangahi and beyond on the new menu. I'll certainly be checking in with them soon!

In the meantime, there's no reason at all for you to delay heading over there for Steamed Juicy Buns and Scallion pancakes.