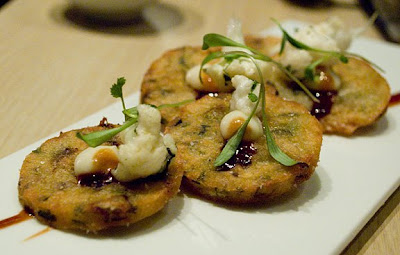 Can I just say that the world needs more scallion pancakes? This much-abused Chinese snack is often served as stiff and dry as cardboard or as soggy and greasy as a bag of old french fries. But properly-made, these savory treats can be a symphony of contrasting textures and flavors. José Garces' new restaurant Chifa not only makes these pancakes well, they even bring some bling to the bing, dressing them with cauliflower, cilantro and a drizzle of salty oyster sauce. The taste and texture reminded us so much of a really good latke that we couldn't help wondering if there might be potato mixed-in with the typical wheat-flour dough. But that's by no means a complaint... Our only quibble with them pertains to the restaurant as a whole: this order of five tiny pancakes, each about 2 inches in diameter, cost $8, at least double the cost for a similar item at a typical Chinese restaurant.

Of course Chifa is aiming for something more sophisticated than the average Chinese dive, serving refined interpretations of Peruvian Chinese dishes in elegant surroundings. Of course the elevated quality of ingredients, service and setting count for something, so it's not unexpected that prices will be higher. But as with most modern takes on traditional cuisines, one often wonders if the extra cost is worth it.

The answer for many customers seems to be that it is, as the ever-expanding José Garces empire (Amada, Tinto, Mercat a la Planxa, Distrito) is based on this formula, this refinement and miniaturization of regional foods has become the Garces signature. This small-plates concept is perfectly natural at Amada and Tinto: Spanish Tapas is probably the most direct inspiration for that entire dining trend. Buffing-up of this rustic tradition draws some criticism from traditionalists who insist that tapas are meant to be cheap and informal, casual snacks to be eaten with a glass of inexpensive wine or Sherry. Regardless of those critiques, Garces has been very successful in elevating these dishes to something more refined, and presenting them in a more upscale context, as witnessed by both the critical acclaim and popular success of his restaurants.

It may be too early to say whether this approach translates well to all cuisines. The food at Distrito is delicious, but I find the whole idea of Mexican small-plates to be disorienting. And that's my initial reaction to Chifa as well. The food we tried was all very good, some of it was excellent, but at first sampling, the portions and pricing feel somewhat in conflict with the nature of the cuisine.

Philadelphia doesn't have a lot of Peruvian restaurants, in fact, since El Sol de Peru in Upper Darby closed a couple of years ago, I can only think on one: El Balconcito, up in the NorthEast. Aside from the beef-and-frenchfry stir-fry called "Lomo Saltado" neither of those places featured the Chinese food served in Peru, a specific cuisine reflecting the surprisingly large ethnically Chinese population of the country. So this is a new fusion to me, and I can't make any comment about how closely Chifa's cooking resembles what one would find in Peru.

The food I've been served in Peruvian restaurants, or Chinese places for that matter, has generally arrived in generous portions. El Balconcito's ceviche platters are almost comically large, so the fan of five thin slices of fish in Chifa's serving of ceviche, or the five tiny silver-dollar scallion pancakes felt somehow disconnected from their origins. That's not inherently a failure of the concept, patrons may be perfectly happy to survey this cuisine in small bites. Although we found most of those bites to be very tasty, we did find ourselves wondering if they were sufficiently more tasty than the traditional versions of these dishes to justify the expense. 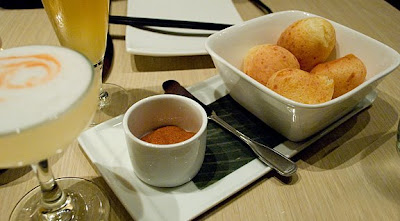 Before we'd even ordered anything, the bread made a positive impression. The light, puffy, cheesey rolls were addictive on their own, completely irresistable spread with the fruity butter that accompanied. The basic pisco sour was perfectly acceptable, if not the most vibrant example of this signature cocktail. 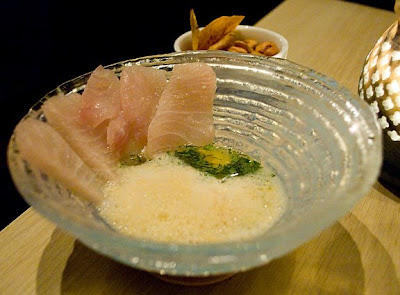 Hiramasa Ceviche, beautifully presented, allowed the high quality of the fish to shine through, the citrus accenting, rather than dominating the dish. While I'm not entirely sure how we were supposed to experience all the flavors, a quick dip of the fish in the marinade seemed to do the trick. Trolling the bowl with a fork yielded some nuggets of charred pineapple, which tasted great alongside the fish. Corn nuts served with the ceviche were an appropriate, and tasty accompaniment. I think this is the first time I've noticed a Philadelphia menu credit the creator of the serving piece, but it was indeed lovely. 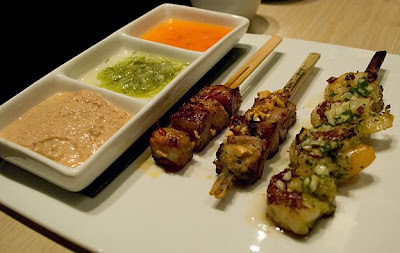 An order of Anticuchos consisted of a skewer of (left to right) Adobo Pork Belly, Cilantro Chicken, and Ginger Shrimp. Although the pork and chicken portions are pretty tiny, the cubes of meat were less than an inch on a side, they were intensely flavorful. The pork belly in particular was a favorite, but the four tiny cubes disappeared too quickly. I'm told the shrimp were tasty as well. The garlicky chimichurri sauce was great on everything, but the peanut sauce and sweet chili sauce were each underwhelming. I enjoyed this dish, but at $13, I found myself wanting a bit more. 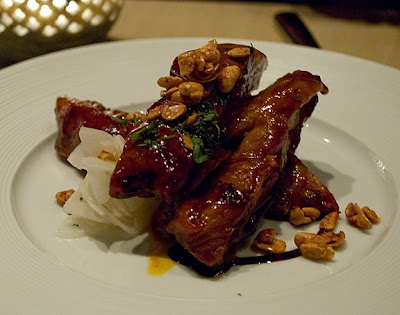 Barbecue ribs were very good, and we quickly got over the disorienting lack of any bones in most of them. They had a very nice smoky undertone, with a sweet-sticky sauce, studded with crunchy soy nuts. I don't think they displace the Wu Xi Ribs at Four Rivers as my current favorites, but they come close. 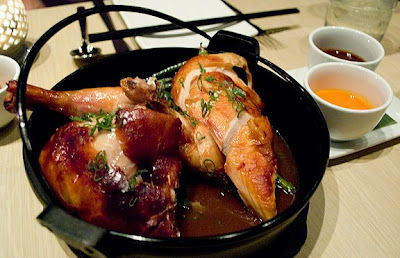 One of the larger dishes, listed under "Specialties" was the Chifa Chicken. It looks a bit like the traditional Peruvian Pollo a la Brasa, with its burnished skin, and juicy meat, but it's not exactly that. Our food runner described it as their take on Peking Duck, and indeed the crispy skin, especially daubed with the accompanying homemade hoisin sauce, evoked that dish. But then it was also sitting in a soy consommé, which gave another dimension, and a dip into the firey homemade sriracha sauce took the flavors somewhere else entirely. Props to the kitchen for the gutsy move of serving an assertively hot chili sauce, surely too spicy for many diners' palates. I thought it was delicious. The chicken itself tasted very good, and the crispy skin added wonderful flavor along with the crunch. But I wasn't completely happy with the texture - it was almost unnaturally juicy, surely due to brining, to the point of seeming a little rubbery.

The restaurant itself is lovely, although the back area is more inviting than the front. That section features a long communal table, a large round table in the corner, and several booths along each wall. I'm sure it would be a fun setting for a group of friends, and the style of food conforms well to that vibe as well.

I liked what I ate enough to want to go back and try more, but I'm still not settled on the greater question of whether this kind of food benefits from this stylized treatment. What we had was good, but are these versions more enjoyable than those at a Chinese restaurant or a Peruvian one? Does the setting and service add enough to draw me back here rather than going to Chinatown or to drive up to a Peruvian place in the Northeast? I'll have to try more of the menu to decide for myself, and I suspect that there's no absolute correct answer, each person will value each element differently. Four small-plates, one larger one (the Chifa Chicken,) a beer and a Pisco Sour added up to $85 before tip, which will go a lot further at most Chinese restaurants, and certainly at El Balconcito. Chifa's reinterpretations and presentations add value, but how much? You may have to decide for yourself.