If Pigs Could Fly...

OK, I'm starting to feel a little fickle, making multiple bold pronouncements about "the best bar snack." But I just keep running across really great ones! So, I do still love the Khyber's Pretzel Dog. I'm definitely still heading up to the Memphis Taproom for pasties. I do periodically need those bacon-wrapped, cheese-stuffed figs at Chick's.

But... I think we may have a new champion, and it's hard to imagine a credible challenge to this brilliant concept: Pork Wings.

Yes, that's right, like Buffalo Chicken Wings, but made with a vastly superior raw material. As far as I know, they haven't been doing any weird genetic modifications to cause pigs to sprout wings, these are actually pork shanks, with the bones frenched to make convenient handles. We had these as a special at Cantina Los Caballitos, although rumor has it that something similar is on the blackboard at Royal Tavern.

The sauce is more substantial than the traditional hot sauce and butter coating for buffalo wings, there's a nice barbecue-ish tang to it, and a bit of heat. The blue cheese dip might be a little predictable, but it's delicious, and a revered combo for a reason. The "wings" themselves are much meatier, with deeper flavor and less grease than a traditional chicken wing. It appears that they're grilled, or maybe broiled, definitely not deep-fried, giving them a perfect caramelized crust, but not an oily coating.

This one's going to be hard to beat... so I feel confident getting behind this one as the true champion, the best bar snack in the city. 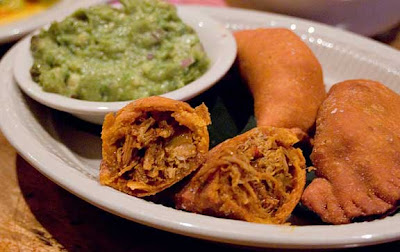 We couldn't just get the wings though. So we needed some empanadas, which were better than ever. I really loved these when the Cantina first opened, then there was a mid-period when they were still good, but not transcendent, but I'm happy to say that they're back to being as good as ever, maybe better than ever. Tender pastry, wrapping a moist, flavorful shredded meat, that's all I ever ask for from an empanada.

We also got the Pork Anticuchos, rum-glazed grilled skewers of pork, served over a quinoa salad. Somehow I didn't manage to get a good photo of them, but they were quite attractive, but more importantly, delicious, with a nice char on the outside, but remaining juicy.

But the real reason we came was for the Goat Tacos. I've had a few goat tacos at taquerias around South Philly, but I never loved those. I'm not sure what prompted me to try these, they may have been recommended by Shola from StudioKitchen, and when he says something is worth checking out, I believe him! 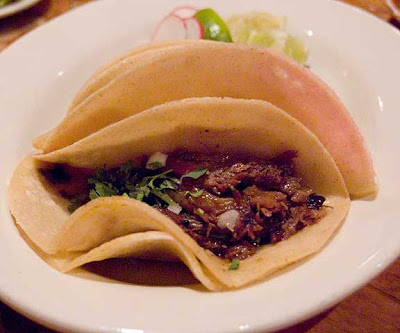 And indeed, over the last six months or so, these have become one of my favorite things to eat anywhere. There's a depth of flavor to these that leaves most other tacos tasting bland in comparison, yet this version doesn't have that funky, gamey taste that so often shows up in this meat. There's something about the spicing and cooking technique that chef Mark McKinney uses that renders the meat tender, juicy, and vibrant.

I've been especially liking these with a little dab of guacamole and some pineapple salsa, but I'll also happily eat them plain. If you've never thought of eating goat, this might be the place to try it, you won't be sorry.

So, between the pork "wings" the empanadas and the goat tacos, this meal contained some of my favorite things. And the rest was pretty darn tasty too...

As the edges of up-and-coming neighborhoods continue to expand and blur, it should be no surprise to find a gastropub up on the border of Fishtown and Port Richmond. I doubt the folks behind the Memphis Taproom use that term, they call it a "neighborhood kitchen and taproom" and while it's true enough that the menu is unpretentious and approachable, the ingredients and preparations indicate serious attention to the food. I kind of doubt that bufala mozzarella imported from Italy and vegan Seitan BBQ sandwiches are on the menus at too many other spots in the neighborhood...

Memphis Taproom strikes a good balance, with an esoteric yet approachable beer list and food that's both familiar and exotic. I don't see Cornish Pasties, Kielbasa or Rarebit on nearly enough bar menus, and this place makes me wonder why.

While perusing the menu, we enjoyed a couple draft beers, including an excellent Troeg's HopBack from the hand-pump. Then we started with a special of the day: imported bufala mozzarella with heirloom tomatoes and pesto. The tomatoes actually had flavor (on June 1st!) and the cheese was so creamy, it was hard to understand how it was maintaining a solid form. 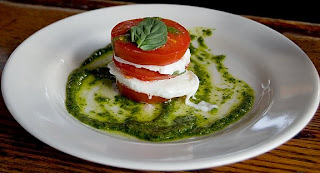 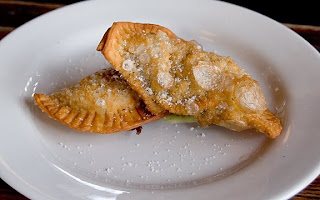 The Pasties are an absolutely perfect bar snack: a light, flaky pastry filled with tender beer-braised beef, accented with a creamy horseradish sauce. Really, it's worth a trip just for these. Seriously, you should stop reading and get up there and order some pasties. Thank me later. Along with the Khyber's Pretzel Dog, this is one of those items that, in a perfect world, would be on every bar menu in town. Although in both cases it comes down to execution, and these are done beautifully. The wrappers are crisp and not greasy, the filling juicy and bursting with flavor. I might have liked a more aggressive horseradish kick from the sauce, but I'm a little masochistic that way. Even with the proliferation of empanadas around town, I'd say these are the best meat-stuffed pastries I've had in a while. I'm not sure whether to include Chinese pan-fried dumplings in this comparison, but these were good enough to even give the best of those some competition. 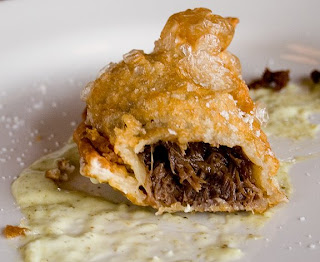 A special of celery root soup was intriguing. I worried it might be a little too hearty and wintery for what was a warm sunny afternoon, but what arrived in the bowl was actually surprisingly light, and infused with more celery flavor than I'd expected. I have to assume some of the tops were incorporated along with the root, giving a fresh, bright, green edge to the earthier root-vegetable flavors. It could have been served a little hotter, and I might have liked some bread alongside it, but those are minor quibbles. 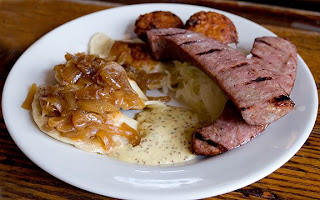 One of the things that drew me to the Memphis Taproom on this particular day was the promise of the Port Richmond Platter. Recognizing the adjoining neighborhood's Polish population, this platter combines Kielbasa from Czerws, potato-filled pierogies, deep-fried potato pancakes and saurkraut. It's just about the perfect thing to eat while drinking beer, especially because each ingredient is so high quality. The pierogies are light and tender, dressed with perfectly sweet caramelized onions. The pancakes (perhaps too spherical to really be called pancakes, but we'll let it slide) are crispy outside and fluffy within, the kraut is fresh and tart. And the sausage... it's just an excellent product, simply split and grilled, and that's all you could ever ask for. Some good mustard is provided, but I rarely applied it, the sausage was so good on its own. 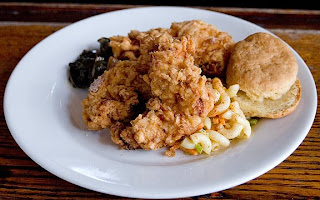 We also tried the Chicken Fried Chicken. The name is a little too logically circular for me - chicken made in the style of chicken-fried-steak, which is steak made in the style of fried chicken - aren't we back to "fried chicken?" This version is made with boneless breast meat, so I suppose it's not traditional fried chicken, but it's missing the creamy gravy that says "chicken-fried steak" to me. Regardless, it's very juicy, tasty chicken, with a good crisp crust, a mild red chile mayo underneath.

The biscuit and macaroni salad were undistinguished, but the greens were outstanding, with a bit of spice adding to their hearty flavor. I'd order this again, and maybe try to get an extra helping of greens... I wonder if we could talk them into offering the greens as a side order? And I'm still picturing this chicken with a cream gravy, and imagining that it would be pretty awesome like that. Still it's good as-is, I really should move past my general belief that gravy is good on most anything. 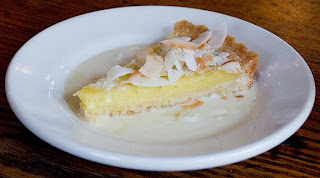 We were a little too stuffed with keilbasy to even think about desserts (that Port Richmond Platter is bigger than it looks in the photo!) but the Key Lime Tart sounded appealing for some reason. I'm glad we decided to indulge, it was very good, with excellent lime flavor complimented by freshly toasted almonds on top. (Note to purists: notice how it's not green? Finally, someone who makes key lime tart with real key limes, or at least real juice...)

Overall, we were very impressed by the Memphis Taproom. It's a lovely space, nicely renovated with a modern, but still pub-like feel. The beer selection is excellent, and the food is just as good. It's certainly worth the trip up to "Port Fishington" as they're calling that border zone between Fishtown and Port Richmond.