The Oyster House - A New Beginning 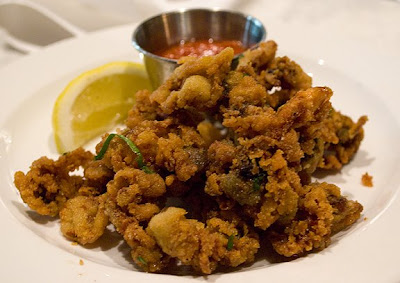 The traditional, informal seafood house had almost become a thing of the past in Philadelphia, with the closing of the Sansom Street Oyster House, and Bookbinders, there were very few places to go for a bowl of snapper soup, a plate of raw clams, and some fried oysters. Nevermind that even when they were open, most of the traditional spots had slipped significantly in quality, or become tourist traps, or both, it was somehow comforting to know one could get some of those old-school classics, even if they weren't that good anymore...

Thankfully, not only have the original owners of the Sansom Street Oyster House reopened as simply Oyster House, but they've also updated both the physical space and the menu. The room itself is barely recognizeable, now sporting a very modern, clean, open look, with the charming retro touch of antique oyster plates adorning the walls. The menu too is a mix of the old and new, with straight-up fish house classics, with a few modern tweaks. 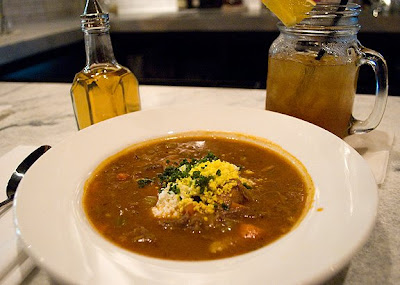 The very Philadelphian Snapper Soup is much cleaner and brighter and, well, better than the traditional versions I've had. It's full of flavorful, fresh turtle meat and still-vibrant vegetables, in a full-flavored, but decidedly un-pasty broth. Add a couple of drizzles of sherry, and it's really quite delicious.

They've just opened their doors, so I haven't had a chance to try their clam chowder or oyster stew, but the descriptions of both are so appealing that I doubt I'll be able to wait for cooler, more soup-appropriate weather. I'll dive into a good chowder even in the heat of summer, but I look forward to dropping in here for a warming bowl of one of these soups on a cold winter evening.

They Oyster House isn't stuck in Philadelphia traditions either, they wisely borrow from some other seafood-centric regions, especially New England. Although chef Greg Ling says they're having trouble sourcing the authentic split-top rolls, the Lobster Roll is still a pretty dead-on rendition, and more importantly, delicious. 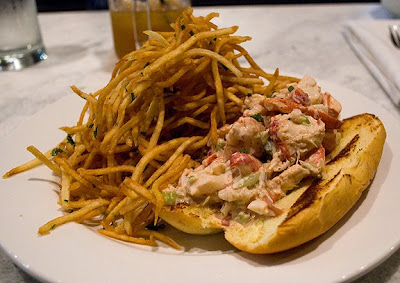 It's a little on the pricey side (varies with the market price, this time it was $26) but there's a ton of excellent lobster meat, perfectly-cooked, lightly dressed, piled on a toasted bun. Pure lobster indulgence without having to wrestle with shells... it's pretty great. I'm not going to get into the argument about whether lobster rolls should be cold with mayo, or warm with butter, and just say that this one is very tasty. We'd prefer thicker fries, but while we were complaining about how we don't really care for shoestrings, we inhaled all of them.... 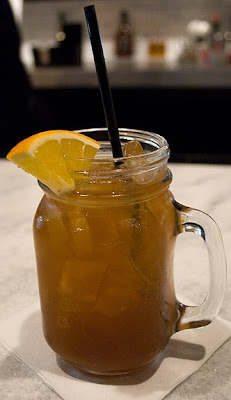 The Fried Ipswitch Clams (pictured at top) were very good, nicely tender inside and crunchy outside. The batter is actually quite flavorful, which some might say distracts from the clams, but I don't think so, I felt like I could still taste the juicy bellies inside. I think someone was moving too fast and gave us cocktail sauce instead of tartar sauce, but they quickly replaced it, and the clams were a little better dipped in the intended condiment!

To accompany, we sipped the Oyster House Punch, a rum, tea and citrus concoction that was refreshing and tingly with spice on its own, but also complimented the food very nicely. There's a nice selection of classic cocktails, slightly tweaked by our good friend, bartendrix Katie Loeb. The bar selection is not terribly deep yet, but I'm confident it will expand, and in the interim, if you'd like a drink that's not on their list, just ask, they may be able to make it for you. Our party indulged in Sazeracs and Corpse Revivers in addition to the punch, and the yellow-tomato juice-based Bloody Mary variation, the Blonde Caesar seemed to be very popular at the bar. I'm sure that we'll see some more drinks appear on the cocktail list over time, but even now, the slightly-updated classics are pretty satisfying.


I was still mid-clams as a dining companion moved ahead to dessert, so I didn't taste it, but a fruity cobbler/crisp kind of thing looked pretty darn good! I was told that it would have been better warmer, but hey, this was the restaurant's opening day, we're not going to get nudgey about things yet! 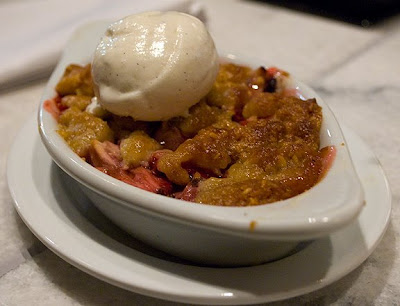 As we were getting ready to go, we chatted a bit with chef Ling, and somewhere it same up that we hadn't tried any Oyster Shooters. He was kind enough to offer us a couple, even though the shuckers had packed everything up. He dug-out a couple of oysters, and Katie mixed-up the accompaniments. 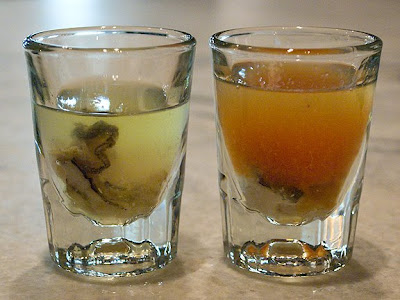 To be honest, I'm not sure I get Oyster Shooters, I can't quite figure out whether I'm supposed to be just swallowing them, in which case I feel like you miss the oyster, or if you're chewing-up the oyster a little, there's kind of a lot of fluid... But then, I might just be a little clueless! If you like oyster shooters, they have some very interesting ones, with innovative flavorings, check them out!

Of course we only scratched the surface of the menu, and opening-night is not the fairest time to assess a place, but we were very impressed. It's a great-looking spot, the food was all good, and service seemed very smooth, especially given it was their first day open to the public. So we look forward to trying more, including, incongruously enough, an amazing-looking burger, which is billed as being made from aged prime beef, and got a big thumbs-up from a guy across the bar from us.