A cold night recently inspired a visit to Sang Kee for Roast Pork Noodle Soup. While we were there, we couldn't resist getting some Peking Duck too, which was quite delicious, much better than our last sample.

But the real standout was the result of an irresponsible addition of yet more pork to our table: an appetizer of "Spare Rib Bits."

They're sticky and sweet and salty and juicy and porky. Which is to say, awesome...

I've long been a fan of the restaurant Han Dynasty in Exton, the quality of their traditional Sichuan and Taiwanese foods is unmatched in the Philadelphia area. Or, at least it was... A few months ago, they opened a second restaurant in Royersford, and I'm more than a little surprised to report that it's even better that the original. The menu is largely the same, except that sadly, Taiwanese dishes are not available in Royersford. The management seems very particular about employing only chefs trained in China, and having them concentrate on the cuisines in which they are most expert. That attention to authenticity is of more interest to native Chinese diners, I'm sure I wouldn't be able to detect the difference if a chef from Chengdu were to make my Lions Head Meatballs, but I suppose someone from Taiwan might...

I'm less concerned with authenticity than I am with how the food tastes, and I'm happy to say that it's delicious. The menu does still include some familiar Americanized-Chinese standards, but it would be missing the point to order those. A nice thing about the Han Dynasty menu is that the traditional dishes are not hidden-away in a secret document somewhere, they're right on the main pages, and the staff is happy to give them to you. They might even try to steer you to the traditional dishes, they have a firm belief that even inexperienced American diners will prefer them. According to the manager, they usually do!

I've been a frequent customer at the Exton restaurant, and some of the staff knows that I carry a camera, so depending on who's working, I'm sometimes recognized. This was true at this first visit to Royersford, so I can't claim to have had a typical anonymous dinner. But I'm confident that the kitchen is putting out food of a similar quality for everyone, I noticed a few other tables of diners clearly enjoying their meals, and I can see that the plates going by all look pretty similar. I've never been able to understand how a chef can suddenly become talented if a waiter tells him that a guy has a camera: maybe he'll plate things a little more carefully... That said - they were kind enough to send out a few small samples of some extra dishes, so the portion sizes depicted in these photos is often smaller than you would get if you ordered them.

To start, I had wontons in chile oil (pictured at top). This is one of my favorite starters, and this version is excellent. It's spicy, but not overwhelmingly so, the dumplings are tender, and filled with juicy pork. The same wontons are also presented in a soothing, mild, but flavorful broth. Both versions are quite enjoyable, I intend to keep having both! 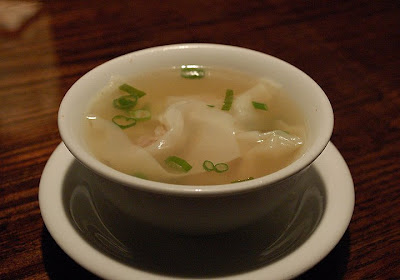 Crispy Sweet Potato Fritters could easily be appetizers or dessert. In fact I experienced them in both positions: I started and ended my meal with one, and they seemed perfectly appropriate both times. The sweet, creamy interiors are encased in a crunchy crust, unencumbered by excess oil.

Bang Bang Chicken is not as explosive as he name would suggest, in fact the sauce is more soothing sesame than incendiary spice, the shreds of cold chicken serving as a perfect vehicle for the creamy coating. 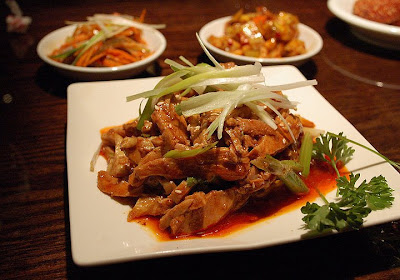 Beef and Tripe with Hot Sauce is a classic from Sichuan, sometimes translated as "Husband and Wife Lung Slice", although there are no slices of lung involved... there is organ meat for sure, but it's more commonly tripe, maybe tongue, heart or kidney. Conceptually, cold slices of offal bathed in chile sauce hold no appeal for me, but in reality, I actually like this dish quite a lot. I've had it at a few restaurants, and this version is the best I've had, the flavors are somehow light and clean, the textures delicate and interesting.

Due to a food allergy, I couldn't sample this dish of braised eggplant stuffed with shrimp paste, but I was tempted: it looked great, smelled really good, I wish I could tell you how it tasted.

Smoked Bacon with Leeks is another classic dish, and one of my favorites, and this rendition stands out. The strips of pork belly are intensely smoky, and the cooking has rendered-off some of the fat, so, despite it fundamentally being a heap of bacon, stir-fried with leeks, it seemed amazingly light. I can't quite fool myself into thinking that it's actually healthy, but compared to some preparations I've had, this seemed positively virtuous. There was no oil pooling on the plate, I couldn't feel my arteries clogging as I ate it, a sensations some versions of this dish evoke. The smokiness and texture of the pork really made this special, once again, the best version of a dish I've grown to love.

Fish Filet in Dry Pot was packing heat, but more importantly, it had the magical "Ma La" balance of chile heat and Sichuan Peppercorn numbing sensation. It didn't blow your head off with brutal spice, but got your entire mouth tingling with that odd, metallic, pore-opening sensation that becomes addictive as you eat more food from this region. 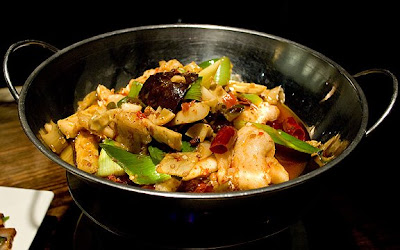 Tea-Smoked Duck had no chile spice, but plenty of flavor from its time over smoldering tea leaves. That treatment, and presumably a quick dip in hot oil, left it tender and juicy beneath its crisp skin, with complex overtones of smoke and spices.

The showstopper of the meal has a name that didn't translate very smoothly, something along the lines of Man in Red Robe Standing in the Snow. The red robes were represented by the abundant dry red chile peppers (no, you don't eat those!! They're there imparting flavor, and making the final dish look good!) The snow came from pure white bean noodles hiding underneath. Slices of beef had picked up a powerful heat from the chiles, and from abundant Sichuan peppercorns, making this the most intense dish of the night, but also the best. The flavor was not merely spicy, it was complex and multilayered, and yes, freaking hot. This was not on the regular menu at the time, I sure hope they add it, it's a great dish.

Every single one of those dishes was delicious, and more elegantly executed than at any restaurant I've been in Philly's Chinatown. I've been to Grand Sichuan International and Wu Liang Ye in Manhattan as well, and I would put this kitchen up against any of those places. So what's it doing in the Philly burbs? There's a sizable population of people who grew up in China working in the high-tech and pharmaceutical companies that are sprinkled through that area, and they crave a taste of home. Especially on weekends, you'll see the dining room filled with Chinese people. But Han Dynasty needs an American clientele as well, and this is a great chance to get a taste of the real thing - Chinese food like Chinese people eat.

Sure, there are a few unfamiliar things on the menu, and the recipes are pretty different from that take-out place in the strip-mall down the street. You're not going to get goopy sauces and a medley of broccoli, bell peppers and snow peas in every dish. But you will get interesting and exciting flavors, and at this place, probably a numbing tingle on your tongue.

The major downside is that it's hard to go back to that stripmall take-out Chinese food...

Apologies for the gap in posts. Between the inevitable time-crunch around the holidays, and some unexpected technical problems with my main computer, I've fallen profoundly behind on documenting my eating experiences around Philly. I'll be making a valiant attempt to catch-up - despite my paucity of posts, there's been no slow-down in eating! We've made some exciting discoveries. Stand by...
Posted by philadining at 11:44 PM No comments:

We'd tried a few times to visit the Cambodian restaurants on South 7th Street, but they tend to close-up pretty early, they're often shuttered and locked-down tight by 7pm. We finally got our acts together to get down there on a Saturday afternoon, and were not disappointed. Sadly, one of the places we had planned on visiting has closed, but New Phnom Penh still sits at the corner of 7th and Wolf.

The cuisines of neighboring Vietnam and Thailand have a much larger presence on the Philadelphia restaurant scene, and on the surface, Khmer cooking seems pretty similar, but it's most definitely not identical. The flavors are different, often a bit bigger and bolder, darker and funkier than one might find in a Vietnamese restaurant, less spicy than Thai.

We started with spring rolls, which may not have been stylistically unique, but they were excellent: perfectly crispy wrappers enclosing a meaty ground pork filling. They were even better wrapped in basil and lettuce, and dipped in a sweet sauce.

A special soup featured sliced beef, ground pork, fishcakes (and normally shrimp) atop rice noodles, in a hearty broth. The soup is not as delicate and aromatic as a Pho, but the gutsy flavor made up for any lack of subtlety. Fresh bean sprouts and a squeeze of lime gave it some added complexity.

Pork on Rice Noodles seemed a little blah at first taste, but little by little, a subtle spice crept up, eventually revealing a complex curry-like flavor to the thick sauce, that was especially good soaked-up by the pleasantly chewy noodles.

A dish called "Beef Style" on Rice was probably "Loc Lac". which is somewhat similar to the Viet "Shaking Beef" but again had a unique flavor, slightly sweeter, funkier, nuttier.

There's really no better way to finish a meal like this than with some dark coffee with condensed milk.

All of our food was quite good, service was very friendly, our server happily offering suggestions when we asked what was good. Prices were extremely reasonable, about $30 for all that food. I suspect that many of the recommendations we got were for dishes that were palatable to newcomers, so we're eager to get back and dig deeper. We noticed a lot of folks having soup, and dipping fried dough into it, which looked pretty great... There's plenty more to explore on this menu, and another restaurant or two just up the street, so we hope to have updates soon.