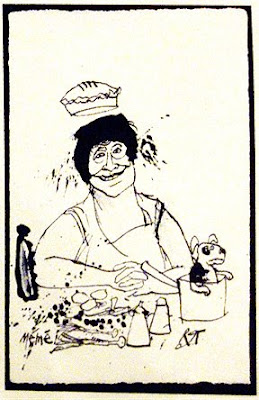 Chef David Katz, who made a splash at the short-lived restaurant M, then had a fleetingly brief stint at the reborn Silk City, then was this close to opening a place in Filter Square about a year ago, has finally surfaced in a restaurant of his own.

Mémé, named for his grandmother, is in the space that formerly housed Melograno, at 22nd and Spruce. Those of you who have eaten in that space know it's pretty small, and a bit noisy, but it's an appealing location, with large windows onto the street, sidewalk seating in good weather, and an open kitchen that lends energy to the room. The interior doesn't look dramatically different from Melograno, but the feel is not the same at all, it's brighter, somehow a little more relaxed-feeling.

(And BTW, Melograno fans, don't despair, they've moved just a few blocks away to 2oth and Sansom, to a larger space, so the changes may have worked-out well for all parties.)

The food at M tended toward the delicate and refined, showcasing innovative techniques and unusual flavor combinations. Katz did that very well, and I miss that aspect of his cooking, but that's not what Mémé is all about. There's a blackboard menu, which tends toward straightforward, classic fare. It's not tongue-in-cheek retro, it's not self-consciously homey, it's just classic good food.

Early press has been unable to resist deploying vivid metaphors about Katz's cooking being as gonzo as the restaurant's Ralph Steadman logo, or as brash and in-your-face as the chef's persona. I can't say I perceived either thing from our meal in the early days after opening. What I experienced was very tasty food, neither weird nor badass, just delicious.

This direction may turn out to be remarkably prescient: in these days of economic turmoil, well-made, comforting food at a reasonable price is likely to be much more popular than fussy upscale cutting-edge cuisine. On one hand, I'm sad that the Philadelphia dining scene hasn't tended to support innovative chefs pushing the boundaries, on the other, I'm happy to have those chefs using their considerable talents to make excellent versions of more familiar dishes.

I'm not sure what to label this trend, so I won't. It's tempting to resort to the cliché of "comfort food" but my grandma didn't make foie gras tarts or steak tartare, didn't seek out artisanal ingredients and didn't roast shitakes with her chicken. I'm open to suggestions for terminology...

The menu is broken up in to three basic sections: "smallish," "larger" and "for two." The first two are roughly equivalent to appetizers and main courses, but I like the opportunity to be more freeform in constructing a meal - some days an array of smaller plates would be just the thing, another time a couple might split three larger plates. The "for two" plates are obviously meant to be shared, we found them a nice size to split amongst a larger group.

The menu is sure to change often, so these specific things might not be available at any given time, but our party of six made a good dent in the opening menu, so we can offer a broad overview of the kinds of things that you're likely to find. 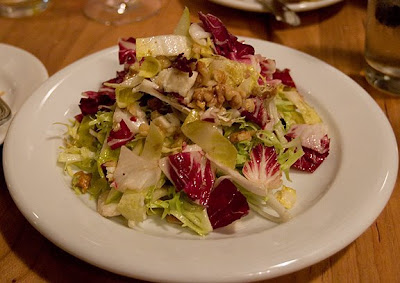 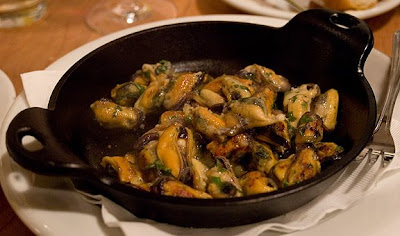 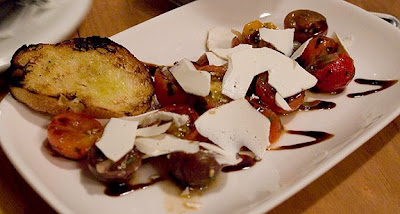 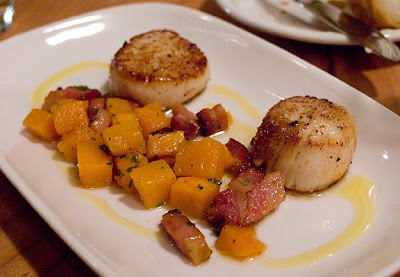 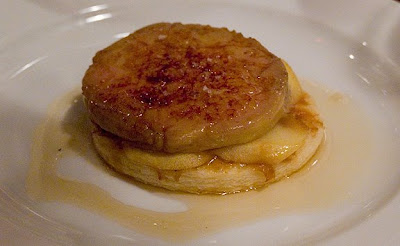 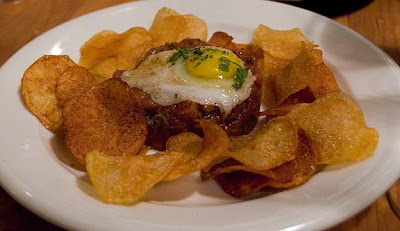 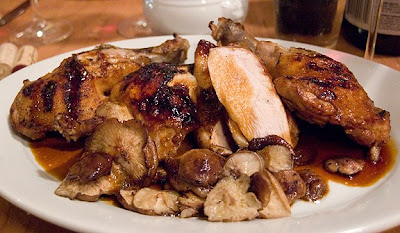 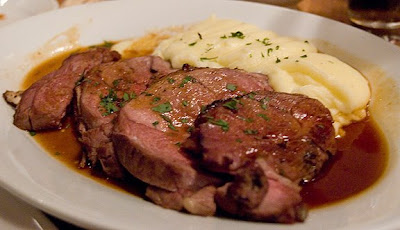 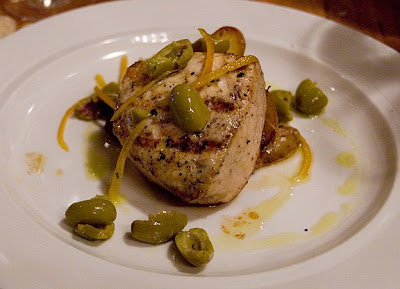 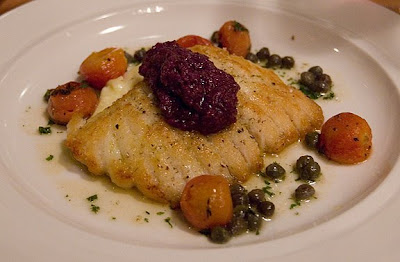 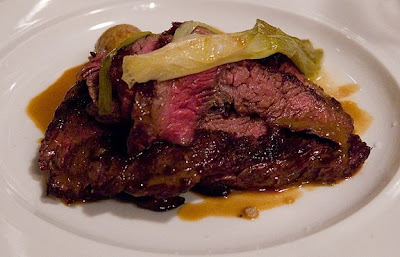 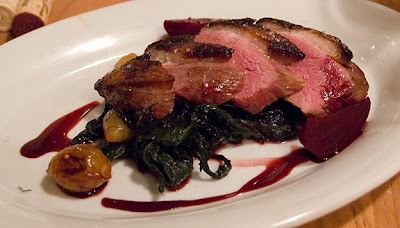 (there's a fettuccini with truffles, and flatbread with goat cheese, figs and prosciutto that we skipped) 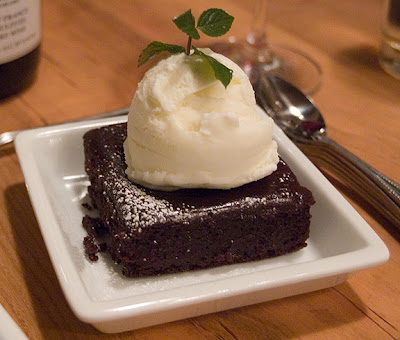 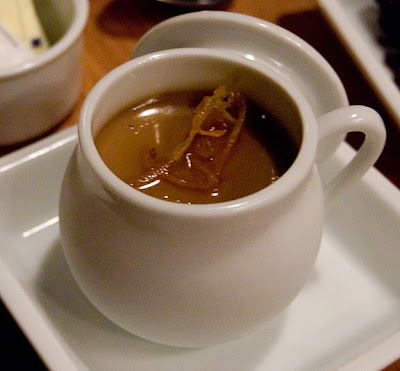 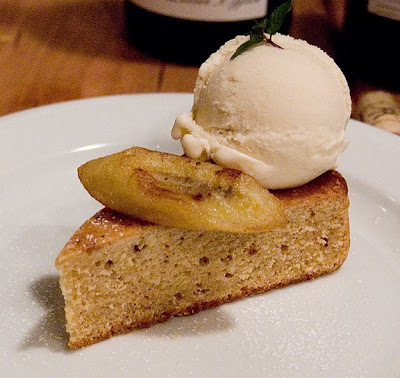 Everything was very good, but my favorites were: the (very) lemony mussels; the simple, but perfectly-seared scallops; the incongruously luxurious foie gras tart; the curry-spiked beef tartare; the intensely flavorful wagyu steak; the juicy roasted chicken; and all the ice creams on the desserts. I'm told the duck was delicious, but that plate didn't quite make it all the way around our table of six!

There were no big culinary surprises here, just expert execution of good recipes. It's interesting that at a table of jaded diners, the simple roast chicken was frequently mentioned as a favorite. The juiciness of the meat, the intensity of the sauce, the roasted crackle of the skin, all made for a rare treat. Why is it so unusual to find good chicken? Similarly the steak was a piece of excellent quality meat, cooked carefully, with only a subtle buff-up from a good sauce. Good ingredients cooked well - it's hard to find fault with that.

If anything gives me pause, it would just be the greater culinary trend toward simple, straightforward preparations: will this kind of food keep me interested? Time will tell. It might. I'm sure there will be some menu changes and variations, specials and seasonal tweaks. And even if the menu stayed static, I think I could eat that chicken a few times a week...

It's an interesting trend: many of our cutting-edge younger chefs are stepping back from modern techniques and presentations, returning to the basics. I imagine that insights gained from the experimental side might quietly inform even classic preparations, but those influences are much less overt. I'll be very interested to see how Mémé's menu will evolve. Apparently many people are urging Katz to slip in a few family recipes, perhaps from his Mémé, that reflect his Moroccan heritage. Whether Katz integrates those flavors, or if we just witness the natural flow of a creative cook, I'm sure the food will change, and I'll look forward to seeing how.

To be journalistically responsible, I should mention that chef Katz knows me, and did come by the table to say hello at the end of the meal. But even though it's a small restaurant with an open kitchen, we were seated at the furthest table from the line, and I don't think that we were recognized before or during the meal. I don't think we received any special treatment, so I think the photos and descriptions are a fair representation of what anyone would get. Tables are spaced close enough that it was pretty easy to see that others were getting dishes that looked the same as ours.

Melograno tended to have long lines most nights, and I have little doubt Mémé will too, they're serving very satisfying food in a densely populated area. A percentage of the seats are held for walk-ins, but they do take reservations, so it should be less of a hassle to check this place out than it often was for Melograno. And I do recommend checking it out.

You may not be as surprised or challenged by the food as you were at M, but you'll almost certainly be pleased by the warm familiarity of classic dishes, by good ingredients cooked skillfully, by the obvious care with which everything is made. And that's no small thing to find in a restaurant: tasty food made carefully. I may yearn for innovation, but I'll take good flavors any day.

It's been a crazy Fall, with various projects, travels and general business interfering with the blogging... But I've managed to squeeze a little eating in around the margins, and will try to catch up with some new posts. 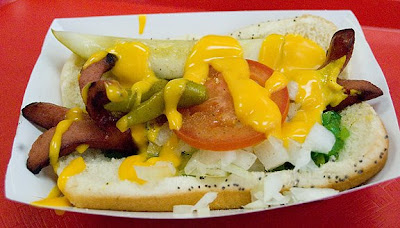 But right before we get there, a few of the distractions. I had about 24 hours to myself after a conference near Chicago, on days when many restaurants were closed, so I wandered and grazed.

That's a Char Cheddar Dog from Gold Coast Dogs in Chicago. Chicago-style hot dogs are not routinely char-grilled, but Gold Coast offers them, and I like them much better grilled. The real appeal is the totality of the package: the florescent-green relish, chopped onion, "sport" peppers, slice of tomato, pickle spear, a dusting of celery salt, all on a soft poppy-seed roll. It's a bit of a mess, and I think I'll skip the fake cheeze next time (I mostly just liked the sound of a "Char Cheddar Dog") but the collage of flavors, textures and temperatures really works. I'm a fan. 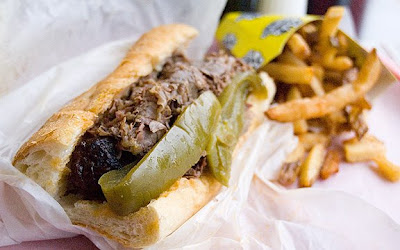 Another Chicago specialty is the Italian Beef sandwich, and "Al's Italian Beef" seems to be a favorite. It's thinly-sliced hot roast beef on an Italian roll, wet with an herby jus, usually dressed with giardiniera, or sautéed peppers. Just as I was about to order a straight-up sandwich, I noticed a variation that seemed like sheer genius: Italian beef on top of an Italian sausage!

Indeed, it was pretty delicious. I was actually not all that impressed by the beef itself, it just didn't seem to have a whole lot of flavor, especially when compared to a Philadelphian Roast Pork sandwich. But the combination of the juicy beef and crusty grilled sausage was very nice, I think it's a great idea. The roll was OK, but not sturdy enough to withstand the juicy meat, so it fell apart before I was half-way through. So, I enjoyed it, but did not find it to be a perfect sandwich. I think Philadelphians could really run with this concept...

I tried to squeeze in a meal at the newly-opened Publican, a gastropub-ish project from the folks behind Avec and Blackbird. But I was jinxed - I went twice, but each time managed to miss the times when they were serving the main menu. Looks like a great place, with many things I was eager to taste, but this time, I had to console myself with a good local beer (a Goose Island "Matilda") and a plate of exotic ham. 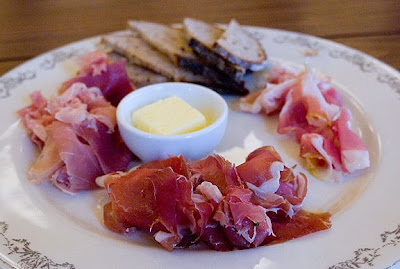 That's Spanish Iberico down front, Benton's country ham to the left, and La Quercia Rossa to the right. Very good rustic bread and goat butter accompanied. I liked the opportunity to taste these three hams next to one another, although I suppose it would have been better to have someone to share this plate with! The Iberico was a clear winner for me, with a deep nutty flavor, silky texture, and mild salinity. The Benton's is great, but almost violently salty, and much drier compared to the other two. It was excellent placed on a slice of bread with some butter, though! The La Quercia, aged using traditional prosciutto-making techniques with domestic pork here in the states, was delicate and refined, but didn't have much flavor compared to the other two. It would be lovely when not overshadowed by other hams. 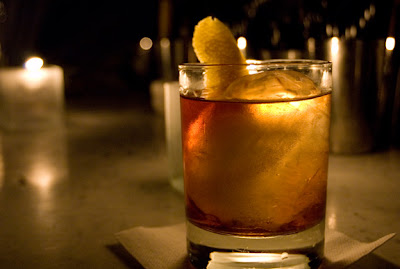 The highlight of my Chicago visit was spending a few hours at The Violet Hour, for some cocktails that were every bit as interesting and delicious as anything I've had at renowned bars in New York. I was lucky enough to get there right at opening, and have the bar to myself for a few minutes, and so was able to chat with the bartender a bit, and zero-in on the right drinks. I really enjoyed the smoky, prickly Autumn Old Fashioned; the Woolworth's Manahattan, spiked with rootbeer bitters; and an improvisation by my bartender Henry, involving tequila, strawberry, hot pepper and bitters. All three were fascinating, and more importantly, delicious. This place will be my first stop next time I get to town, probably on my way in from the airport!

I'm eager to get back to Chicago, and hope to set aside a little time to do more than snacking. But then, the quick bites I managed to grab were pretty great. Chicago is rightly known for some high-end innovative restaurants, but the everyday food is pretty enjoyable too. I got a deep-dish pizza from Lou Malnatti's last time I was there, and I haven't felt the need to do that again, but next trip, I'll certainly get a char-dog, maybe an Italian beef, with giardiniera. Hopefully Frontera Grill will be open on the days I'm there, and maybe I can track down some of the city's fabled Thai food.

Oh, and cocktails at the Violet Hour for sure...
Posted by philadining at 7:22 PM 2 comments: