Update: Snackbar has closed.  Chef Jonathan Adams is currently helming the stoves at Pub and Kitchen a few blocks south.

For November, the Guest Chef was Sholo Olunloyo, of StudioKitchen fame, working with snackbar's Jonathan Mcdonald. Desserts were by Bobby Truitt. (We were psyched to see former M chef David Katz helping out as well.) It was a terrific meal, exciting and unusual in the ways we expect from these chefs. (Full disclosure: Olunloyo, Mcdonald and Katz all know me, but especially in this context of everyone eating the same tasting menu, there was clearly no special treatment.) 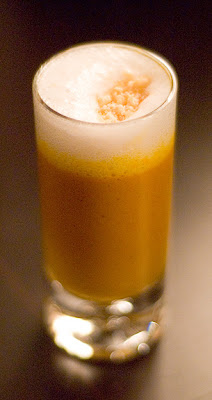 I especially liked this soup. The interplay of sweet carrot, rich coconut, spicy ginger, sweet and salty peanut provided one area of stimulation, while the smooth soup, the airy foam and the crunchy peanut tickled the palate on a textural level. 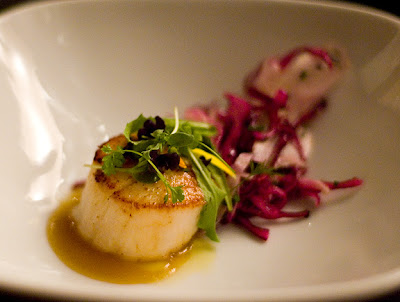 The scallop was not too unusual, yet delicious. The sweet and salty yuzu-miso glaze paired with the acidic "choucroute" gave a needed bright edge to the perfectly-seared scallop. 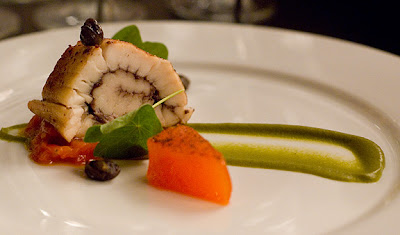 I did not love this dish - there was nothing wrong with it, and interactions of the bold elements were sometimes quite pleasing, but I just found it overall a bit blah, despite the salty capers, the concentrated tomatoes, and other strongly-flavored elements on the plate. 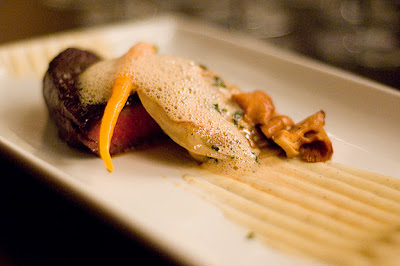 This oxtail gyoza had everyone enraptured, clearly the star of the evening. The extremely tender steak, clearly cooked sous-vide to an ideal medium rare, then seared for a flavorful crust, was quite tasty as well, but the intensity of that shredded oxtail in the dumpling overshadowed everything, even the soothing parsnip purée. 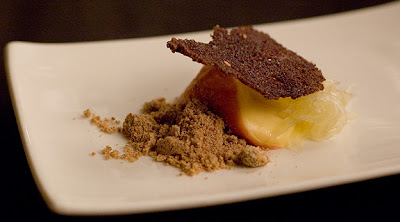 A not-too-stinky epoisses was complimented by the sweet preserved fennel, the crunchy pumpernickel, and the earthy "soil." 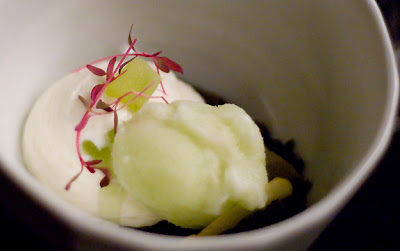 This dessert really knocked us out, with clear, clean, bright flavors, balancing in unexpected ways. Some French Chartreuse paired with the green apple sorbet, the white chocolate appeared in a lighter-than-air zabaglione, the black sesame chimed in perfectly, almost tasting chocolately. Truly one of the better desserts we've had in a while. 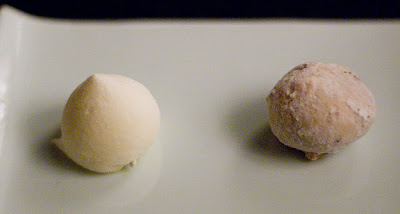 As I started photographing this, I literally heard gasps and moans behind me, as people tossed that airy marshmallow in their mouths, and it instantly dissolved, leaving sweetness and citrus in its wake. And then the crunchy sphere that emitted intense molten chocolate - there was talk of storming the kitchen to confiscate any leftovers, but we realized they had knives back there to defend themselves.

Overall a very good meal, and we're looking forward to more in the future. We hear Michael Solomonov from Marigold, and Marc Vetri are slated to guest-chef soon.

Full snackbar review at Philadining.com>>
Posted by philadining at 1:06 PM