Cajun Kate's, on the Boothwyn Bayou 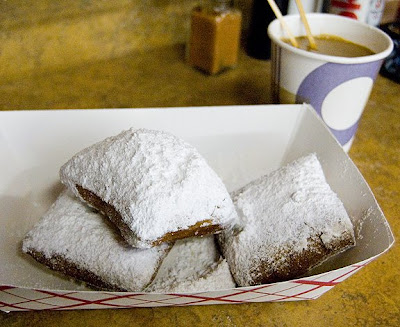 The weekend of August 23rd marked the second anniversary of the opening of Cajun Kate's, the tiny New Orleans-style restaurant wedged into the Booth's Corner Farmer's Market, in Boothwyn. I'm embarrassed to say that I've only learned they were there recently, first noticing a fleeting mention by Craig Laban in one of his weekly on-line chats, then a more formal "or try this" in the sidebar to his review of Les Bons Temps in downtown Philly. Major thanks to him for pointing the place out, I'm already regretting all the great gumbo and po-boys I've missed over the last two years! I'm trying to make-up for lost time, and have been squeezing in as many visits as is practical. This is no small challenge. First, Boothwyn is a bit remote from, well, everywhere except Boothwyn. Second, the market is only open two days a week: Fridays 9am-9pm and Saturdays 9am-8pm.

Despite the obscure location (actually not all that far off of rt 95, near the border of PA and DE) plenty of folks have found them over the last two years. Judging from the crowds I've encountered, Cajun Kate's really needs a bigger space! That's not a particularly deep insight: right now they have about six seats: stools placed along the front counter of a market stall, a tiny kitchen directly behind. The three guys behind the counter are certainly keeping busy, and need to stay alert to avoid crashing into one another. Both Kate and her husband Don honed some serious Louisiana cooking chops during a few years in New Orleans, and that experience shows. Whether it's from their jobs in famous kitchens or just from living in the city and eating the food, their offerings strike me as more authentically Louisiana-flavored than any others I've sampled in the Philadelphia area. Despite the name, you'll see Don more than Kate, and most of the savory side of the menu is his work.

From this very modest space he somehow manages to cook everything for the two-day rush, which consists of a steady turnover at the counter stools, and many more folks dropping by for take-out. They have jambalaya, gumbo, soups, and red beans and rice, packaged up in the fridge and ready to take home, or you can get it hot to eat right away. Most everything else is available for take-out too, although some of the deep fried things are probably best experienced on the spot. 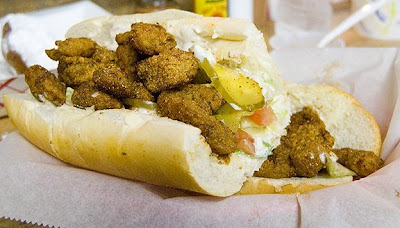 You also really need to eat a Po Boy right there. Don't get it to go, that sandwich might be even more fragile than Philadelphia's Cheesesteak: a composition in perfect balance right after it's made, a soggy mess only a few minutes later. This is especially true of a few fillings I've tried at Cajun Kate's. Their Oyster Po Boy is a thing of delicate beauty. The restaurant gets oysters shipped fresh from the Gulf, breads them and fries them to order, then cradles them an airy, crusty long roll, remarkably like a Leidenheimer's from New Orleans. You really should have it "fully dressed," the lettuce, tomato, mayonnaise and pickles provide an excellent counterpoint. The hot, crispy oysters, contrasted with the cool, creamy accoutrements make for a sandwich that is best enjoyed immediately. Which is not to say it wouldn't be tasty later, just that it's at its best milliseconds after being dressed. 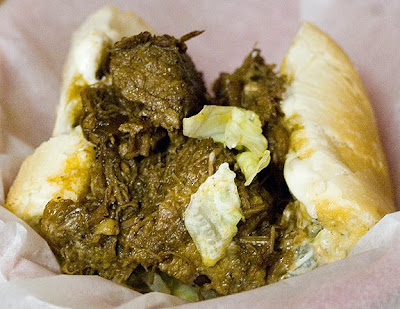 They always have a Shrimp Po Boy, a Catfish Po boy, and a Gator Sausage Po Boy, another type is usually offered as a special. The oyster was excellent, but the truly revelatory one is the Smoked Brisket Po Boy. The meat is cooked long and slow, until falling into shreds, "debris-style." It's then piled onto that fine roll, a thick gravy and juices soaking onto the bread. They offer it with provolone cheese, which might be gilding the lily, but it's not a bad addition. I'm not sure why hot gravy-soaked beef, lettuce and mayo all go together, but mysteriously they do, so I recommend getting even this po boy fully-dressed. Tasting this flashed me back to a delicious Roast Beef Po Boy I had at Parasol's in New Orleans not long ago. That's not something I expected to taste again until I got back down there. The Cajun Kate's version is smokier, but similarly sloppily decadent.

Fighting for favor as the best sandwich here, and indeed one of the best pork sandwiches in the area, is the Cochon de Lait Po Boy. Pork is roasted long and slow until it's falling-apart tender and deeply flavored. It's great in a gumbo, which shows up with some regularity, and even better as a Po Boy. 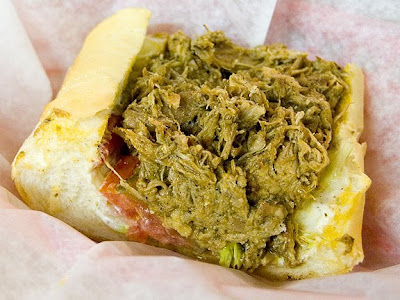 Kate's also makes a very authentic Muffuletta, that particularly New Orleanian version of an Italian hoagie. A large round, seeded roll is filled with Italian cold cuts, and dressed with the olive salad that makes this sandwich so tasty.

This version is very similar to what one would see at the Central Grocery, the originator and most famous purveyor of this sandwich. Even though it's pretty true to the original, I think it could use more filling, and the roll doesn't thrill me (it's a little too sesame seed-y.). The olive salad makes this much more interesting than the average ham, salami and cheese on a roll, but in the end, it's not that distinctive. It's a good sandwich, but with all the other great things to eat here, I'm not sure how many more of these I'll order.

UPDATE: I've had a change of heart on the muffuletta. I got one to go, and decided to warm it up in the oven for a few minutes and WOW! That's an awesome sandwich. It turns out I'm just a fan of warm, toasted muffulettas. That's a controversial topic in New Orleans: the Central Grocery serves them cold, but there are plenty of other places around town that warm them up, and that combination of toasty bread, slightly melty cheese and oily olives has won me over. I'm not sure they have enough oven space at Kate's for them to toast them up for you there, but if you get it to go, tossing it in an oven for a few minutes is a great way to revive the bread a little, and I think it improves the sandwich overall. Try it.

For yet another twist, try their homemade pesto smeared on the muffuletta. It's an unconventional combination, but a delicious one! Ask for a "Muffapesto," it's not on the menu, but they'll know what you mean...

Kate's does not have a very large menu, nor does it pretend to be a fancy creole dining room. It's more of a neighborhood joint for quick and casual food. But it's not merely a sandwich shop either. The menu always includes a Chicken, Shrimp and Sausage Jambalaya, which I risked tasking a small taste of recently, and I loved it, the andouille gives it an assertive, smoky spice. I can testify that the Red Beans and Rice is quite good, perhaps partly because it too is spiked with sausage. 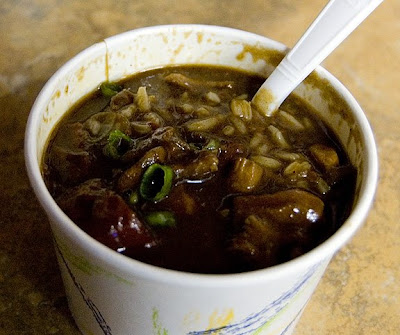 The real test of any place like this is its Gumbo. This stew of meats and/or seafood, thickened with roux, enlivened with peppers, onions and celery, can be found all over the south, but Louisiana makes especially good ones. The specific contents of Don's gumbo changes each week, and can vary from the standard shrimp and chicken, to the more exotic Smoked Duck and Wild Mushroom they prepared for the second anniversary celebration. Expect a seafood gumbo around the holidays in December. These special preparations tend to sell-out early, so be sure to reserve yourself a quart or two to take home if there's one that is especially appealing.

I'm certainly glad I got on the list for the Smoked Duck and Wild Mushroom Gumbo. The duck had cooked down to tender shreds, mingling with chunks of dark mushrooms in a deep brown sauce. It's an excellent gumbo, and I'm already eagerly awaiting its next appearance, whenever that might be... I've been loving the Smoked Brisket Gumbo, and Cochon de Lait gumbo that have been in frequent rotation lately.

The Chicken and Sausage Gumbo pictured above was rich and thick, with a smoky edge from the sausage, and a complex, toasty background from the very dark roux. It was very good as-is, and even better with a dash or two of hot sauce. I'm looking forward to trying all the varieties that I can, it's hard to find a truly satisfying gumbo around Philadelphia. The type of gumbo for the week is listed on their website, as is the po boy, and any other specials of the week, so keep an eye out for varieties that appeal to you. Kate's also makes a very tasty Tomato Parmesan Soup. It's thick and creamy, and enhanced by a dollop of pesto. 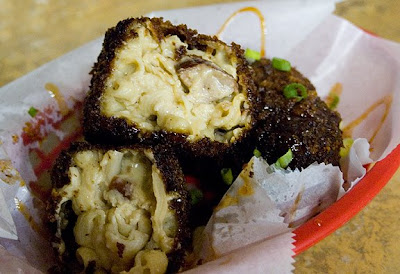 I finally had a chance to try the huge cubes of Deep-Fried Mac and Cheese. It's often studded with crabmeat and Tasso ham, but other flavorings are sometimes available as specials. We were lucky to get one with Sweet Onions and Andouille. The Creamy Mac and Cheese with interesting additions would probably be pretty awesome on its own, but they then bread it, deep-fry it to a crispy brown, and then drizzle it with a sweet/spicy tomato glaze. The resultant collision of crispy/creamy, sweet/hot, tender/chewy is pretty mind-blowing. It's huge, and delicious, and I'm totally getting whatever flavor they have, every time. 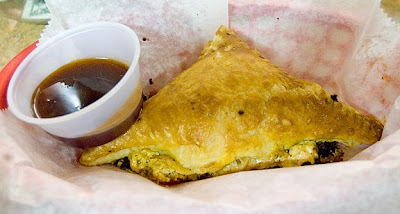 There are a few more Cajun bites on the menu: Crawfish Pie (pictured above) which features light, flaky puff pastry filled with crawfish tails and a a creamy sauce; Gator on a Stick (actually a medium-spicy alligator sausage); Catfish Fingers, and more... but I'm going to have a hard time diverting my attention from a bowl of gumbo and whatever po boy is on special that week. And Fried Mac and Cheese. 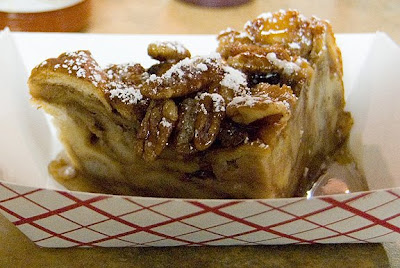 The namesake Kate is responsible for the desserts here, and the Pralines, Bananas Foster Bread Pudding (pictured) and Pain Perdu certainly say New Orleans. But perhaps even more so, Beignets are an iconic sweet of the city, eaten either as a breakfast or as a finisher to a meal. These square donuts, fried to order and dusted with powdered sugar aren't quite as light and ethereal as those at Cafe du Monde, but that's asking a lot! Kate's version is plenty indulgent, and a nice way to start, or end a meal, especially accompanied by a cup of chicory blend Cafe au Lait.

In a perfect world, Cajun Kate's would be open more often, and be more easily accessible from downtown Philly, but on the other hand, they've got a pretty nice thing going. It's a quirky little niche, but they seem to be keeping busy preparing enough food for the two-day rush, and serving it up in their cozy little space. I'd hate for them to lose the magic of this odd little spot, it seems to be just the right size for them to make food the way they want to, so maybe we shouldn't wish for any changes at all.

But both Kate and Don Applebaum have worked in fast-paced, higher volume restaurants, and could probably scale it up to a larger capacity without sacrificing quality. I hope to see that someday, but until then, I'll make the trek down to Boothwyn, and squeeze in on one of the stools, and watch the entertaining tornado of action behind the counter.

And for now, Happy 2nd Anniversary to the whole crew at Cajun Kates!