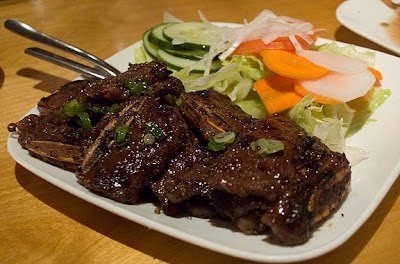 I'm not sure how I ended up taking sides on in long-standing rivalry that exists between Vietnam Palace and Vietnam, restaurants directly across 11th street from one another in Philly's Chinatown. But somehow, I ended up in the Vietnam camp, and I still stand by their huge barbecue platter as one of the best appetizers in town - heck a friend and I will sometimes just share one as a meal. But as a result, I hadn't thought to cross the street in years.

But we recently dared to venture across 11th street to visit Vietnam Palace, and it's there where we stumbled upon our current appetizer obsession: Suong Bo Nuong - Charbroiled Beef Short Ribs. They're sticky, they're sweet, they're salty, smoky, a little chewy, intensely beefy. They're addictive. We've been back three times in recent weeks, sometimes just to get a couple of orders of these. They're a little like Korean Barbecued shortribs, specifically the L.A. Kalbi cut that is strangely hard-to-find in Philadelphia, featuring that distictive cross-bone cut. The sauce is a little thicker and sweeter than one usually finds at Korean restaurants, but the grill char and general flavor profile is reminiscent of that style. 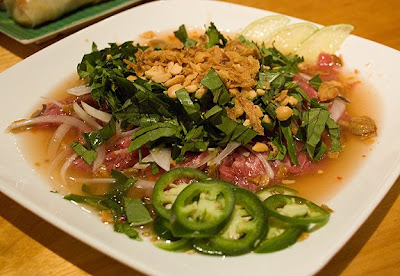 We'd actually oniginally returned to Vietnam Palace to have their "Beef Carpaccio," officially called Bo Tai Chanh. It's thin slices of raw beef, marinated in lime juice, accented by basil, peanuts, raw and fried onions, and hot peppers. We'd been disappointed in some other versions we'd tried around town, and remembered this one as being especially good - and it is - maybe even better than we'd remembered - far and away the best rendition of this dish we've found in Philadelphia.

So that makes two compelling reasons to go to Vietnam Palace, and we haven't even gotten off the appetizer page yet. We've been so obsessed with these dishes that we haven't gotten too deep into the rest of the menu, but we can testify that papaya salad, broken-rice dishes and curries are very good. (I'd skip the fried spring rolls, the ones across the street are much better...)