UPDATE: CLOSED
As mentioned in this review, there's lots of turnover in this location, and sadly, Pearl didn't last long either... it's been replaced by a budget buffet... Oh well..
I could almost devote a blog to the comings and goings in this one storefront: it's been the home of a large number of exciting places. Sadly, none of them has stuck around for long.  I first was intrigued by it being the home of a dumpling place, one of those spots where you could get a plate-full for a buck, along with a stuffed scallion pancake, and other cheap and quick snacks.  That didn't last long...

Following that was one I was really pulling for: Zhi Wei Guan, who also called themselves the Magical Kingdom of Dough.   They served the food of Hangzhou, focusing at least initially on dumplings and other noodle dishes. They had some very tasty soup dumplings, and indeed some of the wontons and noodles were quite good, but I found their other dishes to be even better.  But... they didn't last too long either.  I miss them. 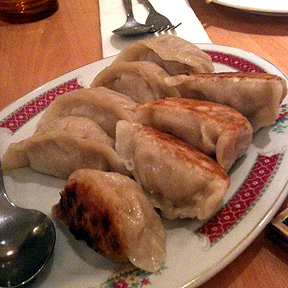 There probably was something in there in the interim, but it seems like only a few weeks ago, we were excited to try Tang's Kitchen, which seemed to feature a variety of traditions, but we especially liked their homey Taiwanese and Shanghainese dishes, like Three Cup Chicken and Lions Head meatballs. They made a passable version of soup dumplings as well, and even better: the fried juicy buns that looked like potstickers, but contained soupy, juicy interiors along with the pork filling (pictured at left.)  But... Tang's didn't last long... I swear it was only a few weeks,

We were saddened to see their awning go down, but when the new one went up, we had reason for at least cautious optimism: It said Pearl Restaurant - Szechuan Noodles.  No, it's not a new location for that fusion-y Vasian place on Chestnut st near Rittenhouse square that closed a while back, this is a whole different vibe, not a slickly designed scene with a club upstairs.


But you don't need a doorman or a velvet rope to get my attention, the phrase Szechaun Noodles will do it! 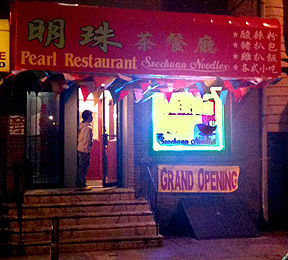 It's not a big menu, and despite the subtitle of Szechuan Noodles, it's not exactly noodle-centric. The first part of the menu is indeed devoted to soups and other noodle dishes, but there are only 5 or 6 of them. The rest of the menu is made up of fairly sparse descriptions of ingredients, so it's never entirely clear what's going to arrive. There are hoagies, congees, and rice platters, a few vegetables, and a list of meats that just read, Quarter Chicken, or Pork Tongue, or Corned Beef.  Yep. Corned beef. 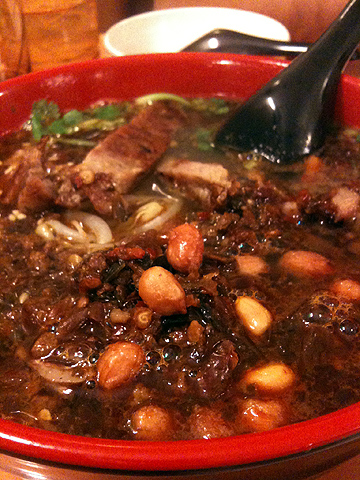 More about that in a minute, but first, let's start with noodles! The first item on the menu is the Hot and Sour Crystal Noodle Soup, to which you can add pork, chicken or beef.  The noodles are clear, slippery, and fettuccini-sized, swimming in a slightly spicy broth, studded with ground pork and peanuts. A few slices of tender pork lay on top, marinade and grill-char cutting through the flavorful soup. This was quite good, and made us eager to try the rest) or just come back for this one again and again!)
We ordered the Pig Tongue, but were told that they had run out. We might be too suspicious for our own good, but we wondered whether the chef just vetoed our order... I hope not, the pig tongue was a favorite dish at these tables back when it was Zhi Wei Guan, so I'd like to see what this version is like.  The waitress suggested the Quarter Chicken as a replacement.  We were surprised to discover that it was served cold, but not disappointed. It was delicately steamed, beautifully tender, and marinated in a light wine-based sauce. 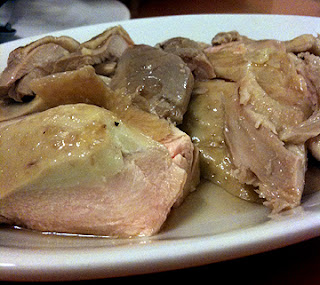 A variety of cold vegetables were lightly pickled, a bright, refreshing accompaniment to the heavier foods. 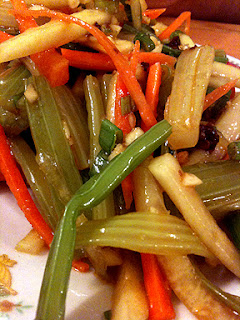 The most surprising item on the menu was Corned Beef.  It was indeed brined, and even had the salty, cured flavor of the item you might eat on St Patrick's day. In this case, it was simply sliced  and served warm, over some pickled radish and carrot. 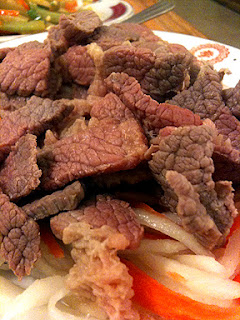 The flavor was mild, not especially exciting, but the combination of the lightly salty beef and the sour vegetables was pleasant enough.
We're eager to try more of the noodles, but also the sandwiches and rice platters.  Prices are more than reasonable, actually downright cheap - soups are $5-6, the meats at $6.95 are the most expensive items. There's lots for under $5.
It's an odd niche that this place has staked-out, but here's hoping that they can make a go of it in this location, where others have failed.  Philly can use as many Szechuan Noodles as it can get!
Pearl Restaurant
925 Race St
Philadelphia, PA
215-922-1018
Posted by philadining at 5:08 AM