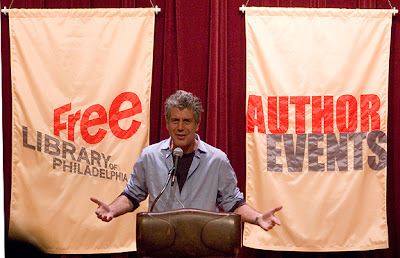 I don't think I was quite ready for the size of the turn-out to see Anthony Bourdain speak at the Free Library on Saturday, December 1. But apparently the Library was, so they had additional seating set-up upstairs with a video feed from the auditorium downstairs. We were lucky enough to get into the main auditorium, but near the back, despite getting there almost an hour early.

Bourdain was quite entertaining, and had some interesting things to say. The shots at how crass and vapid the Food Network has become were to be expected, as was the inevitable bashing of Rachel Ray and Paula Deen, and despite them being pretty easy targets, the insults were fairly amusing...

Before his arrival, the City Paper featured an interview that included his admission that he just doesn't know much about the Philly food scene, thinking it was all Steven Starr and Georges Perrier, and wasn't sure there was much of interest.

The City Paper followed up with their list of must-visit spots which isn't bad, but some friends and I had already been thinking the same thing, and came up with a list of our own:

There are certainly more places that offer good food that he might like, but we were thinking that these places have a good chance of giving him something that's not quite like he can get all the time. Sure, he's had Indonesian food in Indonesia, and tacos in Mexico, and Pizza in Naples, etc, but these are some distinctive places that offer foods that are not too easy to find in most American cities, and most importantly, are really good, in a solid straightforward way.

What did we miss?
Posted by philadining at 2:38 PM