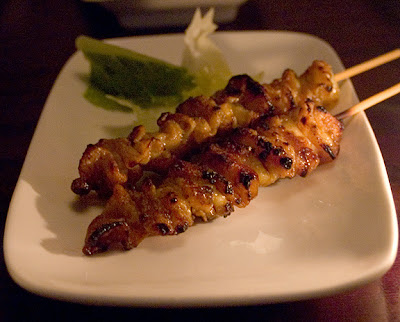 Our first meal of 2008, moments after the New Year's Eve fireworks subsided, was at the not-quite-yet open Yakitori Boy at 211 N. 11th St (just south of Vine, near Lee How Fook.)

It's a nice looking space, with a couple of sushi bars and a drinking bar, as well as some comfortable booth seating on the first floor. There's karaoki on the second floor, but thankfully, no spillover on the main floor, which feels dark, cozy and sophisticated. Servers were very friendly, and we had a ton of them, because we were among the few patrons at the time.

We'd been eagerly looking forward to a Yakitori spot in Philly, so although there's sushi, okonomiyaki, ramen and more, we concentrated mostly on grilled stuff on sticks this time. We're trying to ignore the unfortunate term "Japas" they use to describe the small plates of a wide variety of Japanese specialties, so we'll keep calling it a Yakitori place even though there's much more on offer.

The dining room is VERY dark, so these photos were lit mainly by a single tiny candle on the table. Hopefully you can get a sense of what the food's like.

The chicken skin (pictured above)was a favorite, crispy and a little sweet. It is however, pretty rich and fatty, so there's only so much of that one can eat... 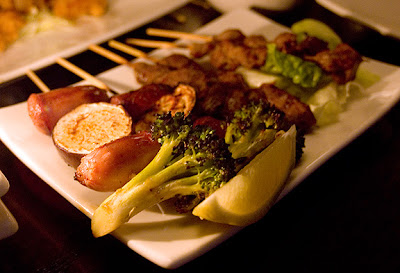 The little sausages were not universally adored, but I liked them. Chicken hearts and gizzards were further back on the plate, here's another look at them: 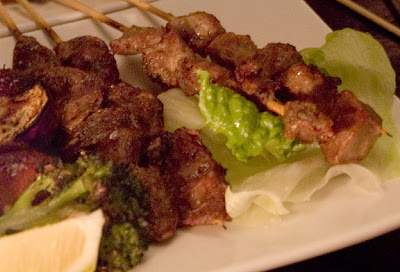 Sadly both were a little dried-out and didn't have much flavor. We've liked these at other Yakitori places, so we'll try them again, it is still very early days for this restaurant. 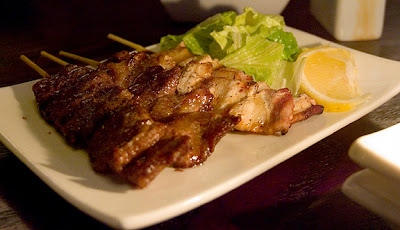 The shortrib (Kalbi) and Pork Belly were better, but again could probably used some sort of sauce or glaze or marinade or something, they seemed pretty plain. That said, simple grilled meat isn't so bad... 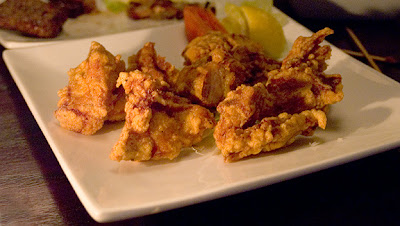 The (boneless) nuggets of fried chicken were very good. They're not quite as crispy as the wings up at Soho, but this version still has a nice crunch, and a little spice, and stayed very juicy. It's a great bar snack.

We also had ebi shumai that my dining partners indicated were very good, and a seaweed salad that disappeared pretty promptly, so I'll read that as a thumbs-up!

So, even though we were not completely blown-away by the quality of the yakitori on this visit, we're definitely going back to try more of the menu, and try some of the grilled things over again once they've gotten into the groove.

They're open late every night, and that alone makes them very attractive. Watch this space for notes on more visits.

--
Comments on a wider variety of food, albeit at an even earlier pre-opening party, at the Herbacidal Maniac blog

More info from Michael Klein at Food and Drinq.
Posted by philadining at 2:33 PM