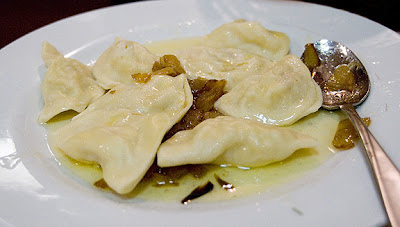 I've long known that there's a large Russian population out in Northeast Philly, and was vaguely aware of there being interesting food/nightlife associated with that community, but somehow had missed-out on partaking of any of it. I often get myself profoundly lost in NE Philly, so I may have been subconsciously avoiding the whole area... But thanks to a timely invite (and a GPS unit) I finally trekked out Bustleton Avenue, and wondered what took me so long!

Stolovaya is not one of the big, glittery nightclubs that are sometimes mentioned as offering a "real" Russian experience in the area. It's a modest restaurant, with a small menu of simple, comforting foods. But looks can be deceiving, and although the one-page laminated menu appears pretty basic, the food coming out of the kitchen was delicious, prepared with care from good ingredients. Service was very warm and friendly, our waiter gave us good advice, and put-up with our indecisiveness with great patience.

There a several different types of Pierogies, all remarkably light and delicate, easily the best I've ever had. Those stuffed with potato, and served with onions (pictured above) were my favorites, but they were all terrific. We had a few other variations on the theme, which is to say dumpling-ish things filled with various interesting things. 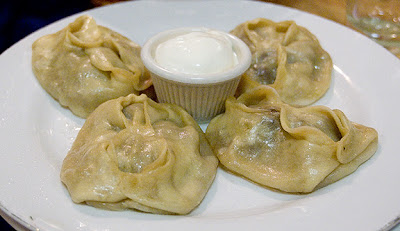 These Mantu were filled with chopped lamb, and had thicker, more rustic wrappers, but were every bit as delicious as their more delicate cousins. 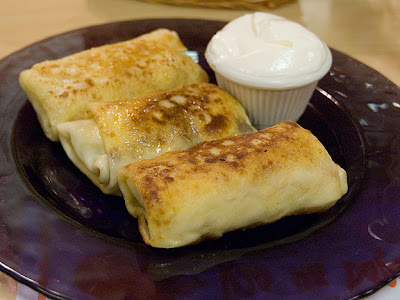 These crêpes were filled with an ethereal ground meat, I think it was chicken, but I'm not sure, it just said "ground meat" on the menu. We were expecting lamb, but were pleasantly surprised by whatever it was.

We also had a special the waiter referred to as "meat in jelly," which featured shredded meats of some sort, in aspic. It was fairly mild, and gelatinous, as you'd imagine, but was actually quite good, especially with the mustard or the red horseradish, which our waiter jokingly called "wasabi." 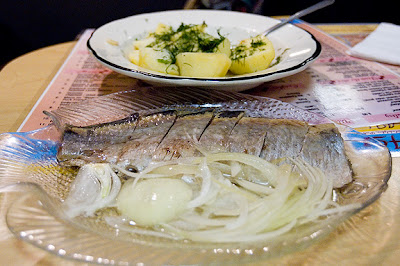 The smoked fish platter had been attacked pretty savagely by the time I got my hands on it, so I won't post a photo of the shredded remains. It was lovely when it arrived! It featured generous portions of salmon and a couple of white fish, all of which met with raves. The Herring with Potatoes was a big hit too. I'm not even that much of a herring fan, at least I wasn't until I tried this, but I found it quite addictive. The simple boiled potatoes sprinkled with dill were an excellent accompaniment. 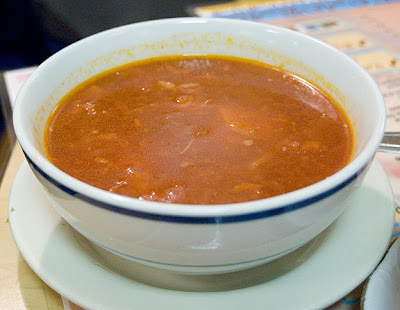 Borsch was just right on this chilly evening, even better with some sour cream stirred-in, extra-good with the special buns that accompany the soup! 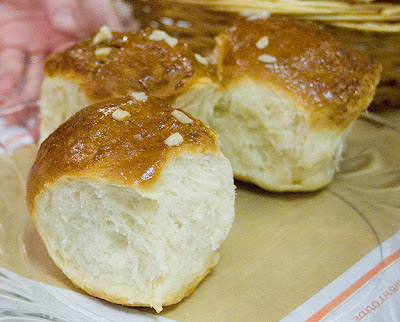 They were so good, we got extra buns, even though there was excellent bread on the table already. 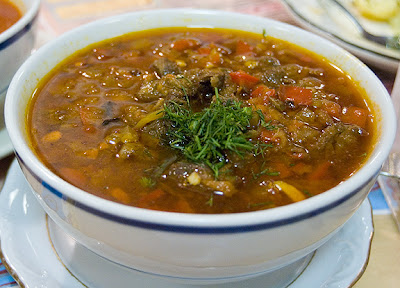 Sadly, I forgot the name of this, it's one of the two specials at the bottom of the appetizer side of the menu. It's a noodle soup with ground lamb, lots of vegetables, and a healthy dose of cumin. 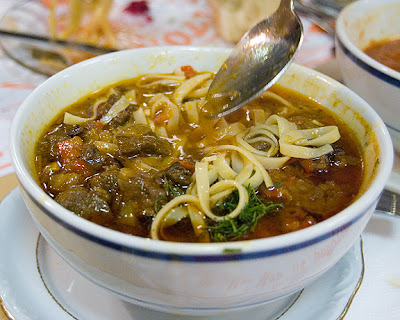 We also quite liked the Solyanka, a tangy soup with chopped smoked sausages, pickles and vegetables. 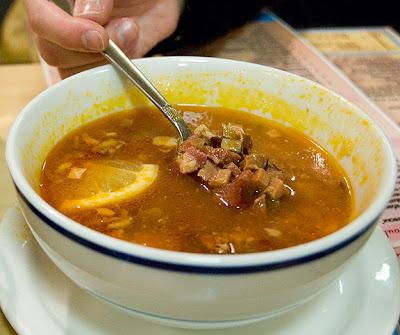 We'd eaten so many starters that we really could have done without anything from the entrée side of the menu, but we felt the need to investigate. I didn't think it would be right to leave without sampling the stroganoff. 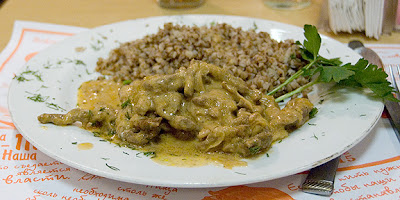 Tender strips of beef were bathed in a sour cream sauce: simple and delicious. The main dishes come with a choice of sides, our waiter recommended the buckwheat, and he was right, it was surprisingly light and tender, and especially good soaking up some sauce.

A special of Leg of Lamb was not especially unique, but it was very nicely done, tasty, and a crazy-huge portion for the price, which was around $12. Maybe $15. In fact all of the food was an almost unbelievable bargain, most if the starters hovering around $5, many mains under $10. 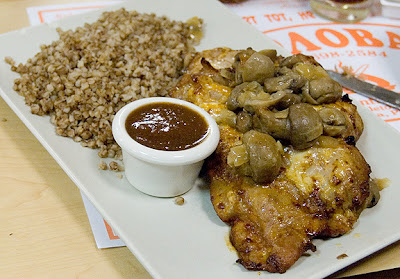 The highlight of the night barely got eaten, we were all so full by this time: a special Pork Sirloin was incredibly juicy and flavorful, perked up by its accompanying tkemali sauce. I think we amused them by raving about the tkemali - it's a fairly pedestrian Georgian condiment, made from sour plums. I suppose we'd be entertained if some foreign visitors got really excited about A-1 sauce, or ketchup, but I swear this stuff is really remarkable. It was absolutely perfect with the pork, and we suspect, on most anything.

We were much too full to get dessert, but we're eager to get back up there again, and now that we know, maybe show a little self-discipline with the starters.

The place is not too hard to find, it's in a little strip-mall on Bustleton Ave, in between a bingo parlor and a small Russian market. The one down-side is that they don't stay open too late, they really want to close-up by 10pm, so get there early. It's BYOV (yes, I mean V!) and I'm pretty sure cash-only, but don't worry too much, it's such a bargain! It's excellent, hearty, well-made food, well-worth a trip off the beaten-path.