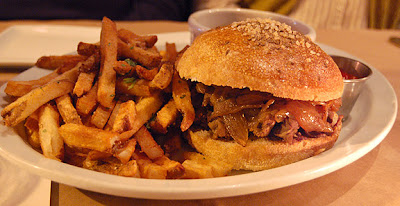 Update: Chefs David and Carla Gilberg left the Ugly American and opened their own excellent restaurant called Koo Zee Doo, in Northern Liberties.  The Ugly American is still in business, but seems to have scaled-back the food side of their operation.

We like the idea of riffing-on informal regional specialties in a restaurant, and of American takes on classic French dishes, so those attractions alone might have gotten us to check out The Ugly American. But when we heard they were serving versions of the Buffalo, NY classic "Beef on Wick" and a Rochester, NY "Garbage Plate," we had to get there ASAP! And our experience was mostly good: we have a few quibbles with some specifics of the preparations, but overall the food was fairly satisfying.

Their "Beef on Wick" is a very tasty roast beef sandwich, given an extra dimension by a very good roll studded with caraway seeds and coarse salt. We suspect these rolls are made in-house, they're certainly not from Wegmans, and house baker Carla Gilberg made some wonderful bread during the short stint she and her husband, Ugly American chef David Gilberg, spent at the Queen Village bistro Coquette. The roll is the secret to this sandwich, and this is a very good version, but there's one other crucial element that didn't quite survive the trip from Buffalo to Philly. A Beef on Wick is always served with horseradish alongside, to provide its unique kick to the rich meat. In this version, a cup of jus on the side was supposed to be spiked with horseradish, but bore no evidence of it. When we asked about it, they brought us a small dish of grated fresh horseradish, which illustrated the problem: it was dried out and flavorless. The concept could have worked, and we respect the impulse to use fresh horseradish root, just not if it doesn't taste like anything! Note to the Ugly Americans: no need to deconstruct this, just put some good jarred horseradish on the side, it'll be an awesome sandwich. This version is somewhat unconventionally topped with caramelized onions, but I can heartily endorse that variation!

(Incidentally, although "weck" might be more proper, "wick" is a commonly-seen spelling for these rolls, and sandwiches. Around Buffalo, they can be found called "kummelweck" "Kimmelwick" and variations of the two.) 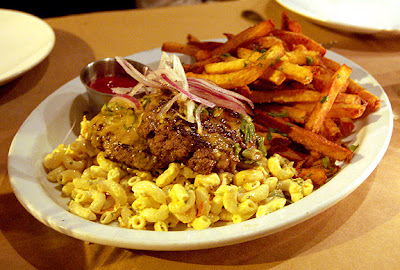 Another Upstate New York specialty on offer is the notorious "Garbage Plate" made famous by Nick Tahou's in Rochester. It's basically a variety of diner foods all piled together on a plate, although a few particular ingredients have become emblematic. The base is fries, usually home fries, but sometimes french fries. There's either macaroni salad or baked beans at the core as well. Burgers or hot dogs are usually stacked on top, then slathered with a unique "hot sauce" then mustard and onions. Ugly American doesn't slavishly adhere to the conventional structure, but includes most of the elements in a slightly upscale version. There are good french fries, decent macaroni salad, juicy burgers, and a "mustard pan sauce" drizzled on top.

The hot sauce (not a spicy pepper concoction like Tabasco, more like an exotically spiced meat sauce, similar to a thin chili) is a crucial element in a Garbage Plate, but is sadly absent here. So it's hard to directly compare the Ugly American's offering to the classic version. Theirs is more of an interpretation, and as such, it's pretty tasty. But other than the burgers being served on top of mac salad, it's not especially Garbage-plate-ish. Stack everything on top of the potatoes, and glop-on a version of the hot sauce, and they'd really have something. I'd love to see white hots as an alternative to the burgers too. OK, I'll admit it, I just want to see some white hots... 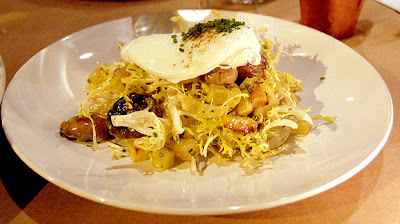 A chickory salad echoes a French classic made with frisée. The dressing was a little shockingly lemony, but an earthy truffle flavor comes through as well, and the combination plays well off the bitter greens and rich poached egg. 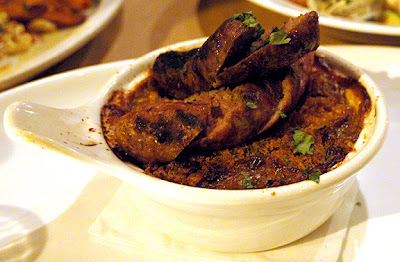 The "American Cassoulet" was very close to excellent. The black-eyed peas and collard greens provided a hearty base for luxuriously fatty pork belly and nicely spicy sausages. Everything was baked together with a crispy breadcrumb crust, creating a pleasing textural range along with the comforting flavors. The one thing that kept this dish from greatness was that one of the sausages had dried out completely. The second one was quite delicious, but that first one was tragically dessicated. One would hope that was a fluke, and we'd recommend this dish as the ultimate winter comfort food. 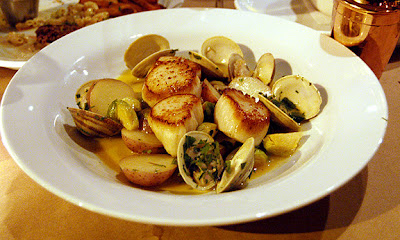 Lighter and brighter is a dish featuring perfectly-seared scallops, along with clams, brussels sprouts, and "salt potatoes." The tiny new potatoes weren't roasted whole with rock salt, in the fashion of the classic central NY "salt potatoes" but sliced-up, they absorbed the vibrant butter sauce to pleasing effect. This was an excellent dish, similar to, but much better than, an entrée Gilberg had prepared at Coquette.

We were too stuffed to attempt most of the numerous desserts, all of which sounded quite appealing. We did manage to sample some sorbet, which had good flavors, but a curiously thick, creamy, almost gummy texture. It was not completely unpleasant, but odd, and made the sorbets a bit less refreshing than one expects. But we noticed some great-looking desserts being delivered to other tables, so we're eager to try some more.

We're being a little nit-picky in some of our complaints, although there's not much subjective about a dessicated sausage. The wine list is perfunctory at best. The beer list is better, but they need a cocktail menu.

But on the up-side, overall the food was pretty good, and we could certainly see going back. We feel like they're missing an opportunity by not featuring more regional American specialties (Binghamton Spiedies? Cincinatti Chili? A Kentucky Hot Brown? New Mexico Green Chile Enchiladas?) But even without any geographical expansion, there's good food to be had here. I could see going back on a regulaar basis just to get a Wick fix!