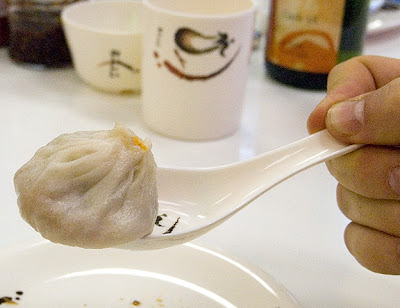 We've been frustrated by the lack of good Shanghainese Xiao Long Bao, (often called "Soup Dumplings") here in Philly. They're pretty rare in general, and the few versions we've found weren't very good. Until now! An unassuming little restaurant on 11th street caught our attention a few weeks ago when a friend noticed them on the menu. A few advance scouts checked it out and reported that those dumplings were indeed very good, and authentic, so we got a gang together to do a more thorough survey. (We're working on a cool name, "The Pork and Chive Dumpling Gang" is a little ungainly... )

[EDITED TO ADD: I was reminded that the menu does not refer to Xiao Long Bao as "Soup Dumplings" and the staff will tell you that these are not soup dumplings. They use the term "steamed buns." The first two items on the menu, the "Shanghai Steamed Buns" and the "Steamed Buns with Crab Meat" are Xiao Long Bao. Number 3, the "Vegetable Steamed Buns" are not Xiao Long Bao, they are large, non-soupy, buns with a more fluffy, doughy wrapper, like the more conventional Cantonese dim sum steamed "bun." The first two photos in this post are of item #2 on the menu "steamed Buns with Crab Meat."]

We're happy to report that the Xiao Long Bao are indeed excellent, with thin, delicate wrappers (careful getting them out of the steamer!) and delicious fillings of pork, or pork and crab, surrounded by an intense broth. They're a little tricky to eat - one needs to carefully lift a dumpling onto a soup spoon, then carefully bite the very top of that extending collar off, and, presuming the soup is not still too hot, slurp up some of the delicious broth. You may then want to drizzle some black vinegar onto the dumpling and pop the whole thing in your mouth. Is it worth the trouble, and the hot-broth burn risk? Yes it is. 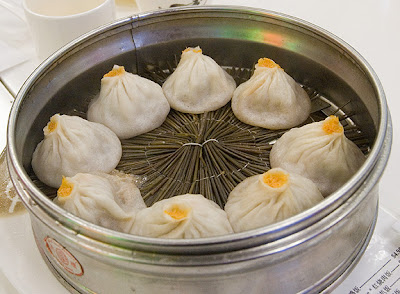 On the specials board was Shaou Mei which we correctly assumed was an alternate spelling of "Shu Mai." 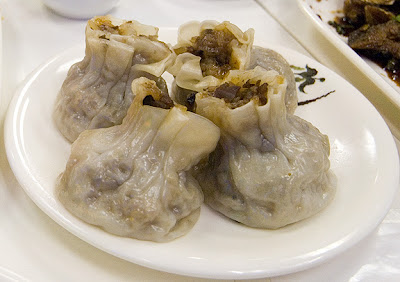 These were not filled with soup, rather with pork and mushrooms, and were quite good as well, if not quite as exciting!

The "Vegetable Steamed Buns" (number three on the menu) were pretty thrilling, because they were about the size of a baseball, filled with green vegetable, mushrooms and, according to our waiter, a "secret ingredient." 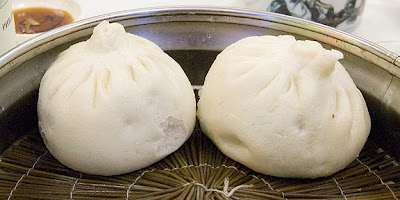 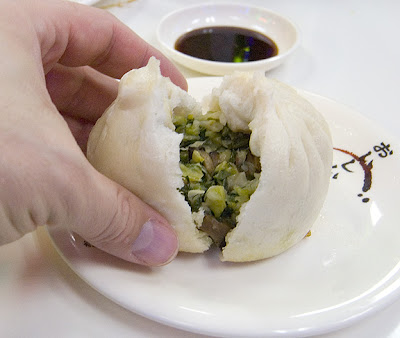 We're not sure what the secret ingredient in the filling is, but we do know another secret: that their homemade sauce for these buns makes a huge difference. A little drizzle of that soy-based sauce really perked them right up.

We decided that we needed some more soup dumplings, when suddenly, TRAGEDY! 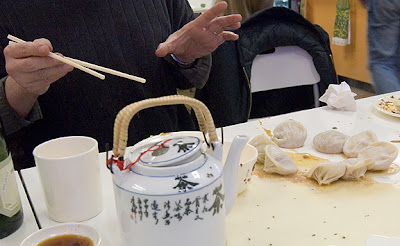 I think a few of us might have actually wept a bit when we accidentally lost control of a steamer full of XLB. Thankfully, nobody was injured by a flying hot soup grenade, and we continued on, shaken, but not deterred.

Tricolor Salad had pickled vegetables and pressed tofu, and give a light and tangy and crunchy contrast to all those dumplings. 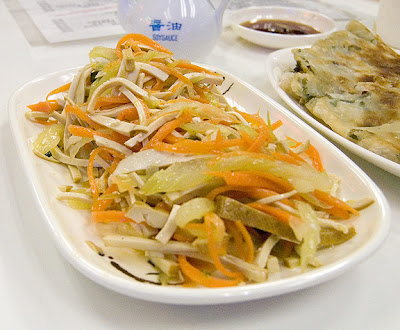 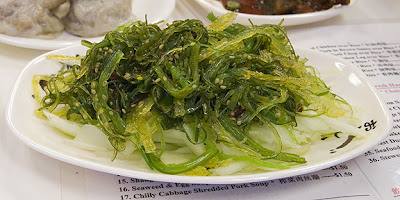 Smoked Fish, on the other hand, brought a darker, muskier note. It was indeed smoky, funky, salty, and a little sweet too. It's intense stuff, but very good if you like strongly-flavored fish. 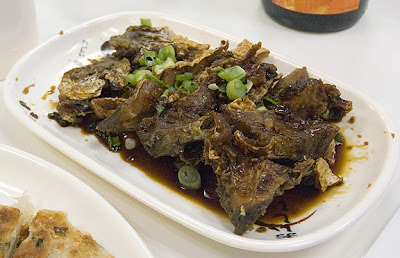 Meatballs were smaller than the classic "Lion's Head" style, but were otherwise very similar: tender meatballs in a thich, slightly sweet sauce. Delicious. 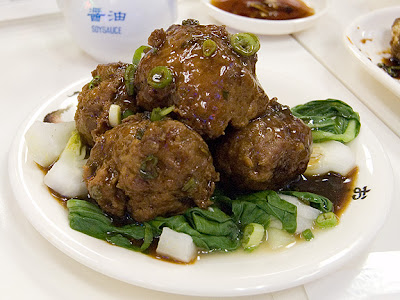 Pork Chop Rice doesn't look too thrilling, but it's amazingly tasty. The meat itself is surprisingly tender and moist, and the rice has soaked up some mysterious flavors. 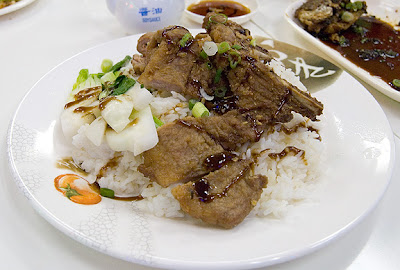 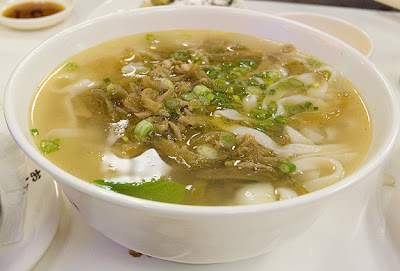 Hand-Drawn Noodles with Roast Duck. I think Iliked the texture of these noodles even better than in the soup, and the duck gave them a great flavor. 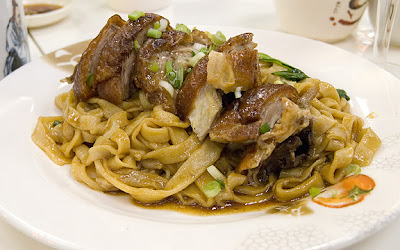 There are many more soups and noodle platters, as well as things served on rice, so "Dim Sum Garden" is not an especially apt name for this place: they have much more than just Dim Sum items, and not an especially wide variety of dumplings and other small dim sum classics. Even so, it's worth coming here for the Xiao Long Bao alone, as well as the other dumplings and buns. But don't miss the noodles or rice platters, this is more of a casual Shanghainese restaurant than merely a dumpling shop.

It's pretty small, with austere decor, and in an unlikely location, but the food is excellent, the staff is super-friendly, and the tableware is surprisingly elegant. Prices are very affordable, we recently gorged ourselves on less than $15 per person. We're looking forward to checking out the rest of the menu as soon as possible. Then starting again at the beginning.

read more in Lari Robling's article in the Daily News>>
Posted by philadining at 4:22 PM