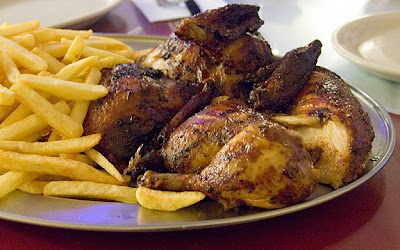 We made an earlier trip to El Balconcito in the Northeast in search of Pollo a la Brasa, the fabled Peruvian Rotisserie Chicken, but discovered that it needed to be ordered in advance. Due to a profound inability to plan ahead, and a lack of confidence in our abilities to order chickens over the phone in Spanish, it took us a little while to make it back. We are now in the process of kicking ourselves for waiting so long. With the help of two somewhat Spanglophonic friends, we managed to pre-order a few chickens, then descended on the place to partake of this famed delicacy. The ordering seemed to go pretty smoothly, but be warned that even with advance notice, they have a finite number of chickens, and perhaps a limited roasting capacity, so if your heart is set on this particular thing, you might want to go on a slow night, and resign yourself to a bird or two.

Even after successfully completing the process, we're a little unclear about the final deadline for ordering-ahead. We reserved two chickens the night before or reservation, but then called about noon the next day and added two more, and it seemed OK. So maybe, call the day before if you can, but early the same day might be OK, if they have enough chickens. The procedure requires a few hours to marinade properly, so plan ahead.

We ordered four, and we got the sense that we were approaching their limit, at least for that day. We were a party of 9 people, and even though the chickens were of a good size, we could have easily polished them off if we had even an ounce of self-control, and had resisted ordering about a hundred other things... Upon the first bites sampled, we immediately thought we were going to have a crisis, because the chicken is incredibly delicious. We were picturing ugly fights among close friends over that last wing or leg, crazed gluttony overpowering our sense of courtesy and civility. Yes, it's that good. 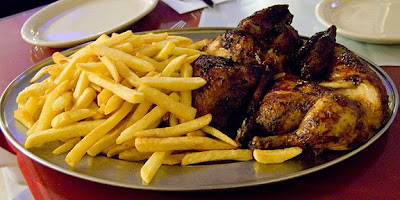 This style of rotisserie chicken involves a tangy, complex marinade that results in a deep flavor and a crispy, dark-hued skin. The marinade seems to involve chile paste, the mysterious herb huacatay (sometimes called "black mint") some citrus, and we think there might be some sugar. The long marination accounts for both a delicious outer coating, and for juicy, tender meat.

To make things worse, the chickens are accompanied by excellent french fries: crisp, light, tender, and somehow staying that way for a long time. Some sort of Peruvian magic potatoes, we surmise...

Just in the nick of time, fusillades of Croquettas de Bacalao were fired at the roiling mob, and moments later a couple of flaming sausages were lobbed-in, distracting them from the birds. With the addition of a few more dishes we actually ended up with some chicken left-over, even though one of our party was a young man who arrived straight from football practice, and promptly consumed three times his body weight in french fries alone! 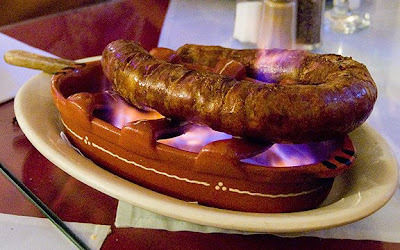 In addition to the chickens, we ordered several things that we'd liked from out first visit. One of the things we really love about this place is that it's got both Peruvian AND Portuguese menus. While there may not be any particular logic to combining the two cuisines, we can't resist ordering from both sides.

From the Portuguese side, the Croquettas de Bacalao were even better than we'd remembered, their perfectly cripsy coating containing a light, airy filling with more salty cod flavor than before. Chorizo was packed a bit looser and was less spicy than last time, but was still quite tasty, especially with its crispy exterior from exposure to an open flame. 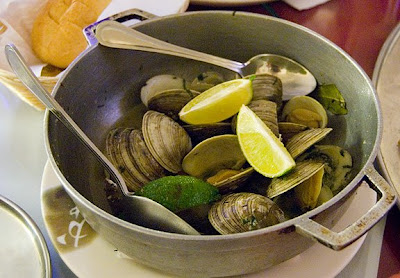 Clams in Garlic were simple, but perfect, the intense broth complementing the tender clams. We tossed a handful of fries from the chicken platter into this pot, and the garlic-infusion sent them to french fry nirvana. We had more bivalves in the Clam and Pork Stew, which met with approval from our Portuguese ex-pat authenticity inspector. He was a bit surprised by the presence amount of pickled vegetables atop the clams, pork and fried potatoes, but did not seem especially disturbed. I had a very hard time refraining from eating that stew, especially once the dark brown sauce, a mixture of clam juices and pork gravy, became more accessible. 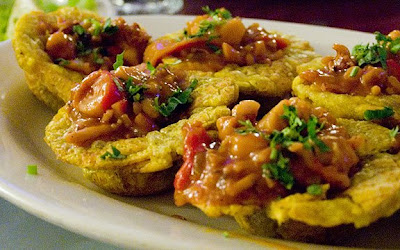 Tostones, pressed into cup-shapes then filled with seafood, were suggested by the waitress, and seemed to go over well-enough, but I don't think they were anyone's favorite dish of the night. Also from the Peruvian side, we had a Ceviche Pescado, a huge plate of marinated white fish, served with boiled potato and sweet potato. And we can never resist Lomo Saltado, the classic Peruvian dish of beef strips and french fries, stir-fried with soy sauce and gravy, to create a dish that wouldn't be too alien in an American diner, like gravy-fries studded with beef and onion.

All-in-all an amazingly delicious meal. All of it was quite good, but we're most enthusiastic about the Pollo a la Brasa, the most delicious roasted chicken I've had in some time. Peruvian Rotisserie Chicken is a bit of a phenomenon in some cities, it's much easier to find in NY and LA, and is more of a gourmet fast-food, not requiring any calling-ahead. I certainly hope the trend catches on in Philly, and we can drop in somewhere for a delicious marinated roast chicken in this style. But until that craze gets underway, you'll find me up here at El Balconcito, reveling in the chicken, and also in the other specialties of Peru and Portugal.