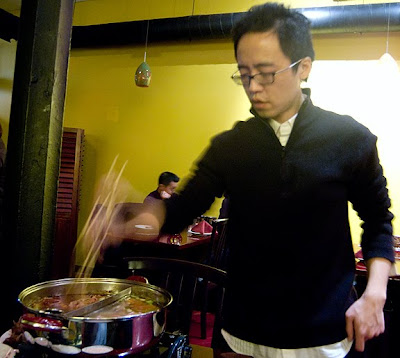 Over the last few years, residents of Philly's western suburbs have had the pleasure of experiencing delicious authentic Chinese food at two Han Dynasty restaurants, in Exton and Royersford. But these spots are difficult to reach for Center City Philadelphia residents, making it impractical for people without cars to enjoy these places. It just got easier for city dwellers: the third Han Dynasty opened in late December at 108 Chestnut Street, in Old City. Like the others, this latest branch concentrates on authentic Chinese dishes, especially those from Sichuan province.

Philly's Chinatown has two restaurants that feature dishes from that region: Szechuan Tasty House and Four Rivers but after eating Han Dynasty food, even the hottest flavors that Chinatown has to offer have been leaving me cold. If you like that unique combination of chili heat and sichuan peppercorn tingle, Han Dynasty can bring it, in a package that's complex and satisfying, not bluntly spicy.

Over the course of many dinners in the various locations, we've become friendly with Han Chiang, the man behind these restaurants, and he's recommended many great dishes we would have never thought to order.Luckily, it doesn't require a long history to get that kind of treatment, that's the way Han prefers to work: even on your first visit he'll ask about what you like and don't like, and steer you toward something that you'll enjoy. In his other restaurants, Han developed a reputation for showing disdain for the Americanized dishes on the menu, trying to convince people to try something more traditional Chinese. It's a good point - there's no shortage of places where you can get beef and broccoli or General Tso's Chicken, if you're in a restaurant that can make you something more interesting, seize the opportunity! At this latest restaurant, there aren't any of those cliché not-really-Chinese dishes on the menu. Instead there are categories of traditional styles of preparation, with options for specific ingredients. Many of these dishes are quite spicy, but not all of them are, there are still interesting options for those who don't care for serious heat. The different styles are marked on the menu according to relative heat level, but also, ask your server (who is very likely to be Han himself) if you want to keep the spice under control.

Rather than trying to work our way through the menu over the course of many visits, some friends and I decided to jump-start the process by getting a dozen of us together and asking Han to feed us whatever he wanted to. We gave him a few days' notice, so he was able to come up with a few special dishes, but we were equally happy with the selections from the regular menu. All of it was quite tasty and very different from what you'll get at most Chinese restaurants in Philly.

He started us with an array of cold appetizers. This is a particular strong point of this kitchen, so we recommend that everyone try something from that section of the menu. We then had a Sichuan Hot Pot, something the restaurant does not regularly offer (although they may do so in the future.) A vast array of main dishes followed, and even a dessert soup. There were varying opinions around the table about favorites, but there wasn't a bad dish all night! 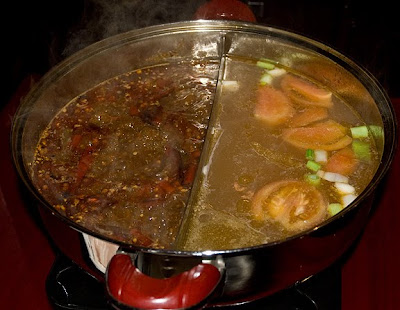 Our group was too big to just put the burner in the middle of the table and have us cook things ourselves, so Han was kind enough to do it for us. There are two types of broth in the pot, one spice the other mild. Then various thinly-sliced ingredients are put in the broth to cook. At the end, noodles are added, and one has soup. 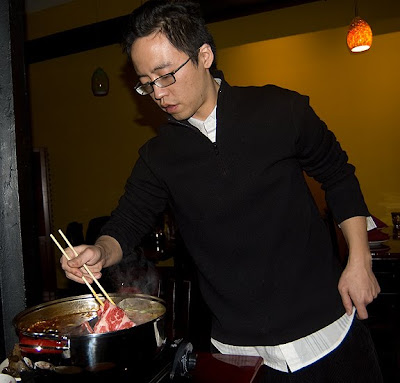 The ingredients cooked in the spicy side of the pot picked up some intense flavors from that broth. The milder side predictably yielded a mellower result. And in the end, it's boiled food, which can only be so exciting. Regardless of the technique, a few of these items came out tasting pretty great, especially the spicy tripe, fish and mushrooms.


After the hotpot, it was time for the main dishes: 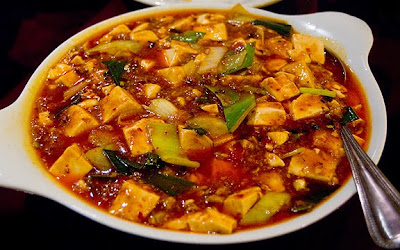 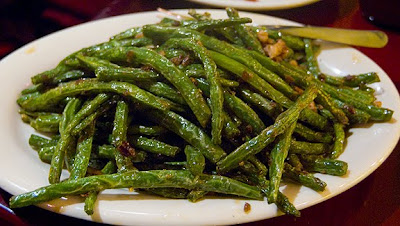 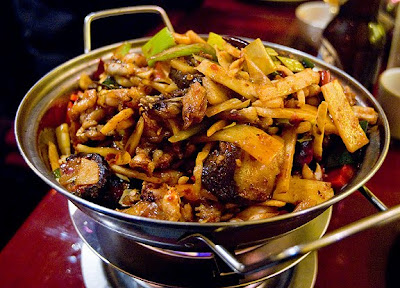 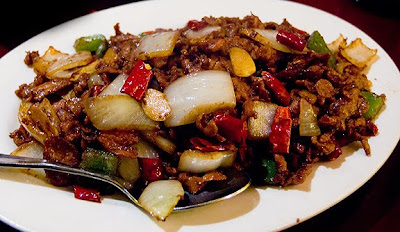 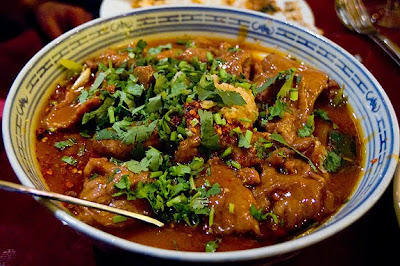 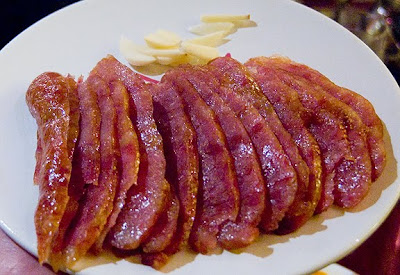 Most of these can be found on the regular menu, although he does not regularly have Frog in Dry Pot. I've had other meats in the dry pot there though, and they're are among my favorite things there. And if you really want frogs, give Han a few days notice, and he might be able to arrange it.

That whole fish was very delicious too, especially as it soaked up that vibrant sauce. Lamb with Cumin is one of our old favorites, the meat is literally encrusted in ground cumin, and smells as good as it tastes - but you'd better be a fan of that spice! The dry-fried string beans may not look all that special, but there's some magic going on in the kitchen to make the salty preserved vegetables and ground pork adhere to the beans, which themselves are just the right balance of crisp and wilted.

The classic dish Ma Po Tofu was made with an unusually light, soft tofu. There was some debate about whether a firmer tofu matches better with the ground pork and bold flavors, but this certainly had an elegant texture. Beef in Hot Sauce featured (mostly) meltingly tender slices of beef, coated in an uncharacteristically thick, delicious sauce. Most versions I've had of this have been much hotter, and in a thinner, oilier sauce, but I enjoyed this variation.

The Taiwanese sausage was a special request, it's just a favorite of our crew, usually as an appetizer at the beginning of the meal, but it works pretty well as dessert too. Once they get a liquor license, I shudder to think how much time I could spend at the bar, drinking beer and snacking on sausage...

I liked every dish that we got, but I was especially taken with the Fu Qi Fei Pian, the Wontons in Chili Oil (once they bathed in the liquid a bit) the Dan Dan Noodles, the Frog in Dry Pot, the green beans, and the fish, even the simple carrots at the beginning. But I look forward to revisiting all of what we had, I'd happily order any of it again.

To finish the dinner, there was a sweet soup. Because we had a large group, Han decided we needed to play a game: one bowl had a red tapioca pearl in it, and that person was the "winner." 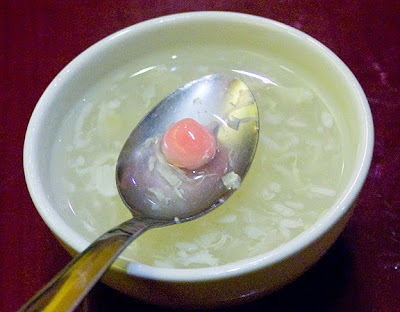 Of course, along with being the "winner" came a compulsion to do something difficult, or humiliating, or painful. Someone in our group suggested doing a shot of chili oil. So be very afraid if Han suggests playing a game... Although, it got us thinking about special cocktails for when he gets a liquor license. Maybe a Chili Oil Bomb? 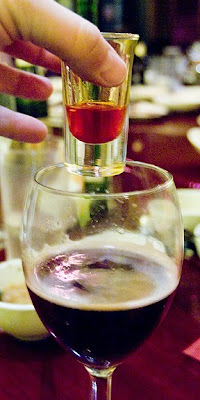 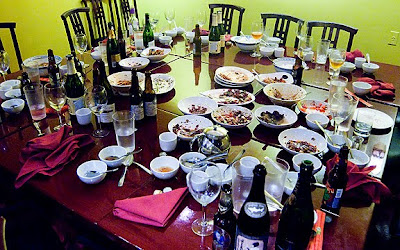 Somehow we manged to eat just about everything, there were very few leftovers at the end. We accompanied this with, as you can see, more than a little beer and wine. Lighter, crisp white wines, not too dry, seem to work very well with this style of food. as do beers. Interestingly, sweet, dry, hoppy, malty brews all worked in different ways. I liked beers that were all over the map: sweet Lindemann's Peche Lambic, a fruity Kasteel Rouge, a dry Ephemere Apple Ale from Unibroue, and a Dogfish Head 60-minute IPA. We also sampled one of Dogfish Head's historical reconstructions, Jiahu, based on an archeological find in China. Not our favorite beer of the night, but interesting,and certainly drinkable, and its slight sweetness went pretty well with the food. So... beer...beer is good. Or heck, some elegant off-dry Champagne isn't bad either! 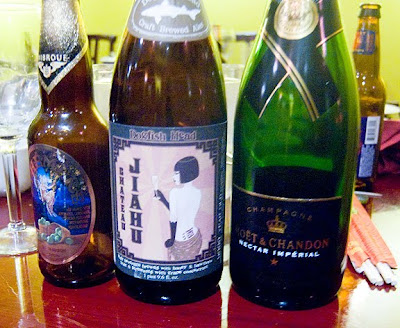 All in all, a very enjoyable evening, with delicious food and good companionship. Thanks to all my dining friends, old and new, who made it possible, big thanks to Han for getting it all together, and rushing around to accommodate us, while tending a few other tables at the same time. And major props to the chefs, who put out some amazing food.

Don't wait to assemble a dozen of your closest friends - the restaurant is just as enjoyable in smaller groups - you'll just have to make a few more visits to survey the menu. That's not such a bad fate...