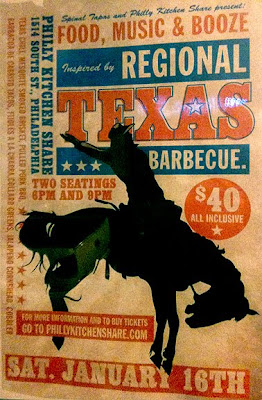 Having picked a name like Spinal Tapas, the organizers of this ongoing series of group dinners probably shouldn't be surprised that people aren't sure whether to take them seriously or not. Even looking beyond the moniker, it's natural enough to be skeptical about a couple of guys who aren't professional chefs hosting dinners in a rented space. Sure, it could be kind of charming to eat food made by some talented amateurs, but can it be better than a decent dinner party? It turns out that yes, it can. Thankfully, unlike their name, their cooking is not a joke.

The situation is helped by the fact that the two music writers at the center of this project, Tim McGinnis and Brian McManus, have culinary training, and have worked in professional kitchens. So they're not just those neighbors you know that can cook pretty well, and everyone keeps telling them they should have a restaurant. These two are cooks that could probably be working in conventional restaurants if they wanted to, but instead are exploring some other models for serving dinners, outside the bricks and mortar of a conventional restaurant. As it stands right now, the Spinal Tapas dinners are held in the rental kitchen space called Philly Kitchen Share. Most people who rent this space are small-scale commercial cooks or bakers, perhaps they're selling cookies or candies or sauces, and only need a commercially-outfitted kitchen from time to time, or need it to meet health codes.

The Spinal Tapas folks make the space do double-duty: not only do they cook the food there, but it serves as a dining room too. Work tables are pushed together, dressed with tablecloths, and become a long communal table for 16 in the middle of the kitchen. It's not especially elegant, but many foodies, myself included, enjoy sitting in the middle of the action, watching the normally behind-the-scenes process.

Of course, by the time the diners are assembled it's mostly just final turn-out and plating, it's not like one gets a cooking lesson, but diners do get to chat with the chefs and perhaps gain a little insight into how things were done.

This most recent dinner had a Texas Barbecue theme. There were dishes representative of several regions of the state. Brian McManus lived in Texas for many years, and while that does not automatically confer barbecuing credentials, it at least means that he might have learned what the authentic food of the area was like. I haven't spent enough time in Texas to make any pronouncements about authenticity, but the food did remind me of flavors I've experienced on visits to Dallas, Austin, and San Antonio. And more importantly, it was delicious. 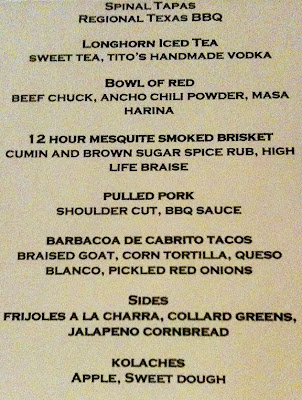 The night started with a mug of beer and/or some spiked Ice Tea. Then, a "Bowl of Red," an excellent chili made with Arbol chili peppers and chunks of beef. The was assertively spicy, but in a full-flavored way, not as a heat-for-heat's-sake stunt. 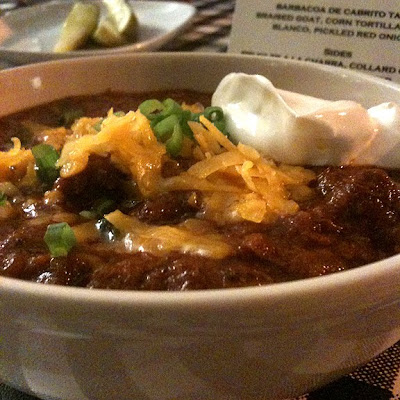 Next was pulled pork, accompanied by jalapeno cornbread muffins, and three different barbecue sauces. The meat itself was largely un-sauced, but had a sweet glaze that accented the flavors of pork and smoke. I quite enjoyed this with no accoutrements at all, just the plain pork, perhaps piled on a chunk of cornbread. 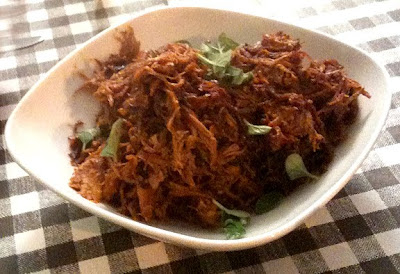 Then Brisket, and the large, thick slices were nicely juicy and tender. There was a pile of shredded brisket too, which was rather severely dry, even a good dose of sauce was not enough to resuscitate it. One of my dining partners was clever enough to ask if there were any burnt ends available, and although many of those edge pieces had been chopped and added to beans, there were indeed a few sizeable ends available, and they happily brought them over to us. Those burnt ends were luxuriously fatty and moist, not as crisp as some we've had, but still nicely crusty, and highly spiced from the rub. Surprisingly neither the ends nor the slices of brisket exhibited a strong smoke flavor, but each had an intense beefyness, and the wonderful texture that can only derive from a long, low smoke. 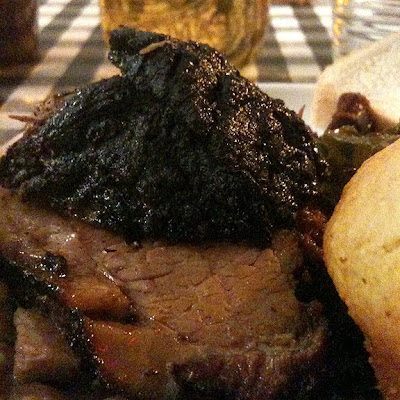 These meats aren't necessarily going to strike fear in the hearts of competition barbecue guys that have been honing their techniques for decades, but in the context of the evening, everything was pretty great.

Collard Greens and Frijoles a la Charra accompanied the meats, and both of those were very good too, due partly to each being spiked with meat. 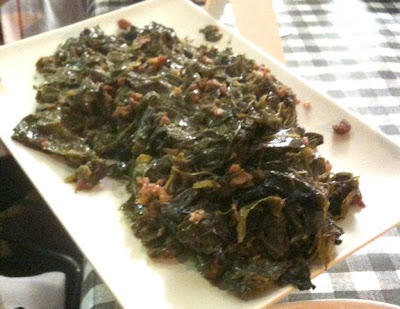 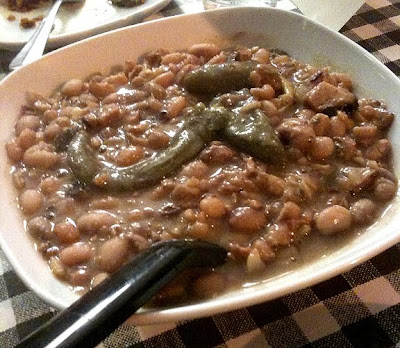 The final savory course was goat tacos. Tender shreds of cabrito were served in delicious corn tortillas, apparently purchased in south philly, but bearing a rustic feel that made them seem homemade. Excellent guacamole and pickled onions made perfect accompaniments for the strongly-flavored meat. 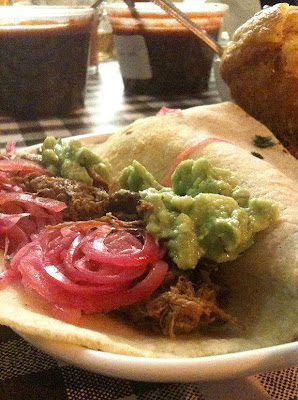 This was a ton of food, served on platters, family-style, and it arrived in incessant waves! Before we knew it, we discovered that we were stuffed. And then dessert was delivered. We probably would have loved something light, after all that meat, but this was a traditional Kolache: a ball of dough, baked, then topped with apple compote. A delicious caramel sauce complimented the fruit flavors. It was tasty, but dense! 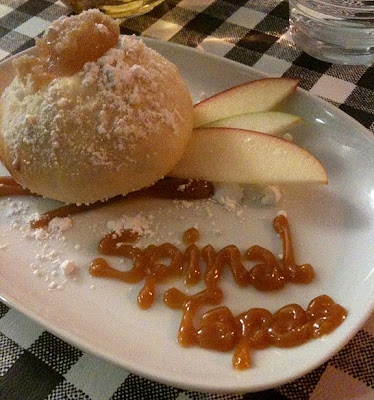 And then, we were done. It felt like it went by in a flash. They were doing two seatings that night, and it's a rental space, so their pace might have been a little more urgent than your average restaurant, but overall the service was quite friendly and efficient. 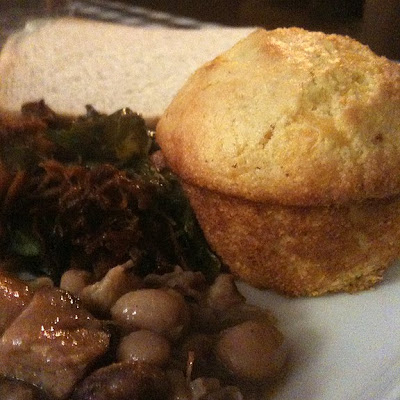 The long, thin tables don't make it easy to chat with folks too far away from you, but there still is something of a communal feel, as you pass platters of food around. And the chefs and servers couldn't have been more friendly, giving the whole event a very relaxed mood. Overall, it was a very enjoyable evening. They're planning on a Peruvian theme for the next dinner. I don't remember exactly when it will be, and I'm not even sure I want to tell you - at least not until I book my seats! I'll be very interested to see how they do with this very different cuisine - of course it's possible that they just happen to be good with barbecue... I did not attend their first dinner, at which they surveyed some of Philly's must-eat dishes, so I can't speak to the quality of those, but this barbecue dinner was good enough that I'm looking forward to whatever they do next.

Not much info at: spinaltapas.com

Posted by philadining at 1:24 PM