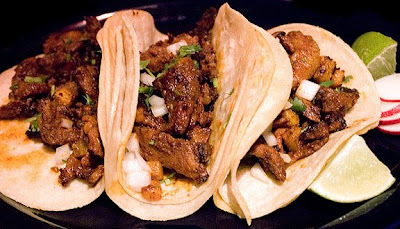 I've been very excited about the opening of this new restaurant in Northern Liberties. I'm a big fan of the food at Cantina Los Caballitos in South Philly, and this place, while not an exact duplicate, is owned by the same folks, and the same chef runs both kitchens. The food is not identical at the two places, but if you like one, you'll surely like the other. There's some food in common, but the new place's menu is much bigger, and sometimes delves into the specialties of some of Mexico's regions that are seriously underrepresented here in Philly. Pork Carnitas are slow-cooked in lard, as they are in Michoacan; I've already seen two unusual Moles from Oaxaca; there's a vertical spit for making Al Pastor like they do in Mexico City.

I know some of this just from reading the menu, but I also was lucky enough to get a couple of sneak peeks behind the scenes as they were getting ready to open. I know the owners, and have taken a few photos for them, and even managed to sample a few dishes early on.

As a result, I probably can't be completely objective, and some of the staff surely recognizes me, so I'm not the ideal disinterested anonymous critic, but I think I'm still capable of saying some honest things about the place. I'm pretty sure my tastebuds are still functioning, and I can sincerely say that there's great food coming out of this kitchen. I'm not facing any dilemmas about that: I can wholeheartedly recommend everything that I've tasted so far.

I'm not sure what Chef Mark McKinney's approach is to these traditional dishes, how far he deviates from the conventional preparations, but I do know that the results are delicious. I've had some amazing Oaxacan food at restaurants in southern California, such as Guelaguetza, and McKinney's Coloradito and Amarillo moles stand up very well to those complex concoctions. I've been on a continuous quest for the ideal Tacos al Pastor (pictured above) and this kitchen is currently in the lead. Even the lowly chimichanga is elevated here to something refined, with a light flakiness to the tortilla, rather than the heavy, dense, oily shell one often encounters. 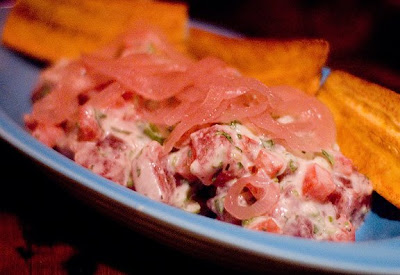 I was out of town for the first few days that "Dos" was open, but as soon as I got back, I made sure to run down there and check it out. I was not disappointed. The place looks great, our server was very nice, and most importantly, the food and drink totally hit the spot. We started with a Bluefin Tuna Ceviche, rich with coconut milk, sweet with onion, and refreshing with a little tomato. This was very good scooped up with plantain chips, or with corn chips, or on its own. McKinney was chef de cuisine at the restaurant Passion during its heyday, and that place had some of the best ceviches I've ever tasted, and it's great to see some of those flavors living on. 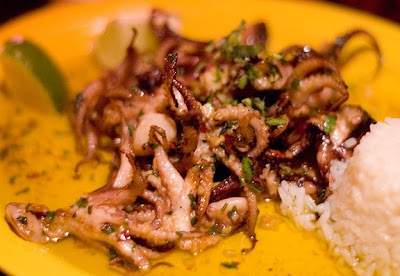 We also sampled the baby octopus, which was just outstanding. Philly's a great town for octopus, there are lots of excellent versions of this in the city, but I don't think I've seen any quite like this. These tiny, whole octopuses are tender, yet a little crispy and smoky from some time on the grill, dripping with an herby, garlicky, citrusy dressing. The texture's both tender and crispy, the flavor's earthy, marine and bright all at once. It's a really nice preparation, and a welcome change from the same-old big grilled tentacles. Don't get me wrong, I'm still in love with the old classic at Dmitri's, but this is a great alternative. I've had these whole baby octopuses poached and served cold in Chinatown, but I like this hot, marinated version even better. 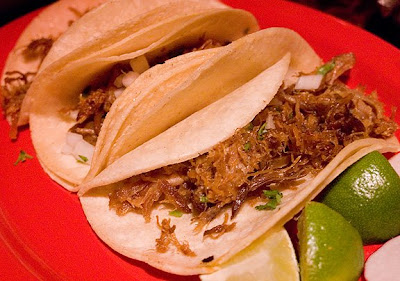 The Carnitas, one of several filling available for tacos, burritos, tortas and more, are made in a way I had not encountered before. The pork is slow-cooked in lard, similar to the classic preparation of duck confit, then shredded, and cripsed-up in a pan. This results in an intense pork flavor, and a nice interplay of moist tenderness and crunch. I really like these a lot, the only downside being that the mix of moist and crunchy isn't always consistent, and sometimes a few bites can be a little dry. But the flavor's great, and a little does of salsa or guacamole tends to fix it right up.

Of course the fabled goat tacos are available here too, and every bit as good as those at the Cantina Los Caballitos in south philly. While it's very hard to distract me from the goat tacos, the Al Pastor, as mentioned above might just do it. They have a vertical spit, as used often in Mexico City, but not seen very much in the states. That particular mechanism, spinning a stack of sliced marinated pork in front of vertical heating elements, results in crusty edges, but a juicy interior. An artful slice off the perimeter gives a mix of both textures, some pineapple adding yet another texture, flavor and element of moisture. Taquitos de Puebla on 9th street in the Italian Market had been the local champion in my assessment, and I still like them there, but "Dos" uses a more aggressive marinade, which adds a welcome extra dimension. 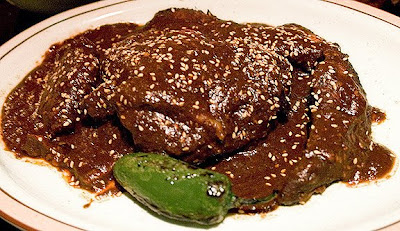 I'm a big fan of mole, and I've been a little frustrated to find little variety in the selections available here in Philly. Mole Negro can be quite good, but there are seven classic moles in Oaxaca, and we rarely see any of the others. So far at Dos, we've sampled a Mole Coloradito, a Mole Amarillo and a Mole Rojo, each served over tender Eberly Turkey, and they've been both delicious and a welcome alternative to that ubiquitous deep, dark mole negro. Here's hoping we'll see the rest of the moles, and other specialties from Oaxaca.

Cantina Dos Segundos has just started serving brunch, and so the menu of brunch-specific items was fairly small this first time, but I'm sure it will expand in future weeks. But I don't care if it ever expands, if they keep this one special on the menu: Huevos Dos Segundos. 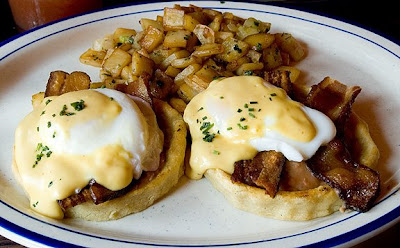 Of course, it's a take-off on Eggs Benedict, but in place of the muffins, corn masa cakes. Instead of Canadian Bacon, there's Benton's Bacon, which in my book is the ultimate smoky pork delivery system. It works great here. The hollandaise is perked up with a touch of chorizo, and there's a layer of intensely porky refried beans under the perfectly-poached eggs. This is a really nice twist to the brunch classic, and I'll order it again and again, as long as the Benton's Bacon holds out. I didn't love the potatoes, and the masa cakes might be better with a little more crunch, but even so, I'm craving this again already, and am plotting a return visit for brunch.

We also had another order of the tuna ceviche, some goat tacos, more carnitas tacos, and a couple of sides. Both of those were pretty spectacular. The Elotes was very tasty, the grilling bringing out the sweetness in the corn, the mayo, cheese and lime adding some decadence... 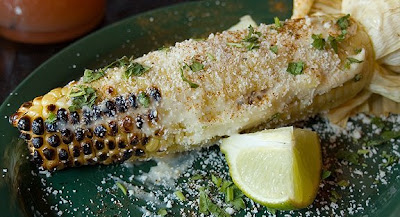 Perhaps more decadent still were the Plantanos Machos. Sweet plantains were caramelized to amplify that candy-like character, then drizzled with crema and sprinkled with cheese. 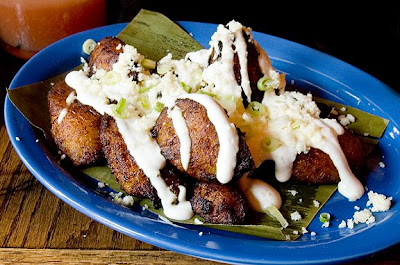 I could eat those all day!

I'm not sure why I failed to photograph our drinks. We had a few really tasty margaritas, and I really liked my "Los Ovnis" which featured Ginger, Rum, Boing! softdrink, and grape, if I remember correctly. I'd also tried a "Cola de Caballo" which includes, bourbon, cola and liquid smoke! It's odd, but I can feel myself being drawn back to get another...

So again, much like the Cantina Los Caballitos in south philly, "Dos" has drinks perfect for this summer weather, great snacks for bar munching or starting a dinner (I saw lots of orders of ribs go by, and they looked great, but I haven't sampled any at the new place. They look the same, which is fine by me.) I did manage to grab an empanada, and it was just perfect: light and flaky, with an earthy ground-beef filling. And it also has full-on dinner offerings too. I was amused by eavesdropping on a nearby table after brunch, as they rhapsodized about their rib-eye steak.

I might just have to get that steak soon, but in the interim, I'll be dropping in for tacos and empanadas and plantanos... and I'm keeping an eye on the specials, I suspect that's where we're going to see the really interesting stuff.