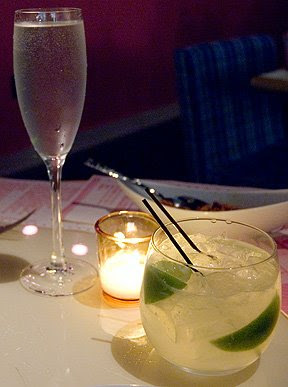 My eyes hurt. I just got over my ringing ears from a cacophonous dinner at Parc, and now my eyes are ringing. I don't think I've been this overwhelmed by vivid pink since I accidentally wandered down the Barbie isle at Toys R Us.

It's got an open, fun, casual feel, with scorpions embedded in the bar, movie-marquee-style signs, a wall of luchador masks along the stairway, rattan booths, swinging seats, other chairs seem a bit like patio furniture. Overall it looks and feels a bit like a beach party.

To be blunt, I don't like the look. But that might just be me, I'll bet most people will be fine with it, and the lighthearted vibe will almost certainly appeal to the 8 bazillion college students nearby. But it just strikes me as a little too silly, and a bit cold and empty-feeling.

More importantly, the vibe of the restaurant seems completely out-of-synch with the food coming out of the kitchen, which is extremely elegant and refined, tiny jewel-like constructions of delicate flavors and complex textures. Everything we tried was absolutely delicious, often surprising, and very meticulously composed.

On one hand, this should be no surprise, given the level of polish seen on the dishes at Amada and Tinto. Those places are a good analogy for Distrito: there was some grumbling about how the casual, informal tradition of tapas may have been buffed to too high a gloss at those places, resulting in expensive, overly polite versions of the originals. But beyond that conceptual argument about what tapas should be, there was (general) agreement that Garces's food was very well-executed and quite delicious.

The same philosophy in in effect at Distrito. The concept is "small plates" and indeed the portions are surprisingly diminutive. But within those compact proportions are some amazing flavors, and extremely artful constructions. I think that the portions might be exactly right, that these particular versions of dishes should be experienced in measured doses, rather than in massive bowl-fulls. Just don't be surprised when your order of Pork Belly with Mole Verde arrives in a 4-inch Staub mini cocotte, four bite-sized pieces of meltingly tender pork over rice, a dollop of green sauce. It's delicious, but not what one would expect at a Oaxacan restaurant, or quite what I was expecting in this party-like atmosphere.

I had the good fortune of dining with Katie Loeb, on her night off from Chick's. She knew some of the staff from her days working at Amada, so we benefitted from a little special attention, and a couple of complimentary dishes. The first of those was a revelation. It didn't sound all that interesting from the menu description, but after a few bites, we were telling our waiter that they should make this a mandatory item: just put it on the table without asking, nobody will ever complain. 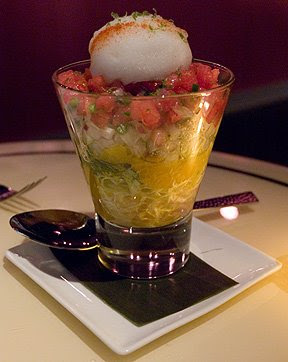 It's somehow sweet and savory at once, crunchy and juicy, refreshing and intriguing. I strongly advise you to just get one of these no matter what, it's a nice starter, a perfect palate-cleanser, it would even be a good dessert. 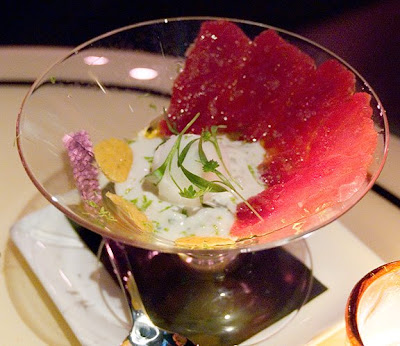 From the "Huraches" section, we ordered the Los Hongos, which featured mushrooms, huitlacoche sauce, cheese and corn shoots. 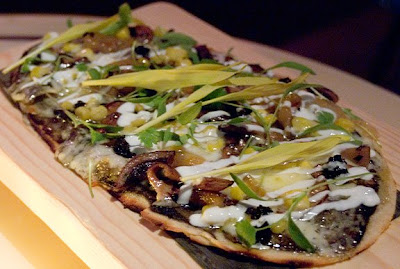 The huarache itself, a very thin, crispy flatbread, was much thinner than any I've had before, but it worked very nicely, transmitting an earthy corn flavor and nice crunch. The topping was very tasty, the creamy wild mushroom flavors lightened by the corn shoots. 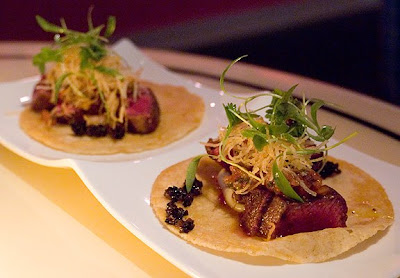 This is one of those dishes that may induce portion size sticker shock: it's two tiny tacos, maybe 4 inches in diameter, with a few slices of beef on each, for $12. Yes it's luxuriously tender beef, yes it's extremely tasty, and yes, I'd order it again. But it's a bit of a surprise when they arrive, looking so... dainty! The flavors are anything but: the meat is assertively beefy, there's a tingle of horseradish, a crunch of potato straws, and a comforting smear of truffled potato. 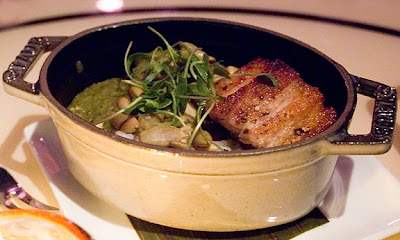 As mentioned earlier, I laughed a little when this arrived, I'm used to Moles being large, deep plates of sauce, with a chicken breast island in the middle. This is obviously a whole different thing. And for what it is, it is quite satisfying. Four bites of pork belly might not seem like much, but what there is is very nicely executed. The rice is light and tender, the sauce vibrant and complex. I could use a little more sauce... I could use a little more of everything in this dish, but it's only $8, and I did enjoy it quite a lot. 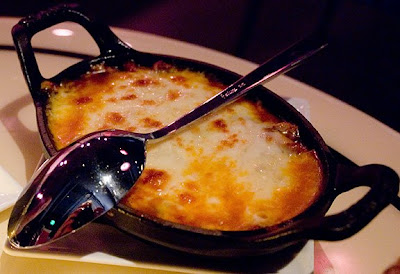 I was a little skeptical about this one: I love queso fundido, I love duck, I never thought of them together. I must say, I thought it worked very well. Smear some of that on delicate, made-to-order tortillas, and it's a great flavor combo.

We also got some black beans and rice, also served in a tiny Staub cocotte, which were basic, but good, but didn't photograph well.

We ended with Tres Leches 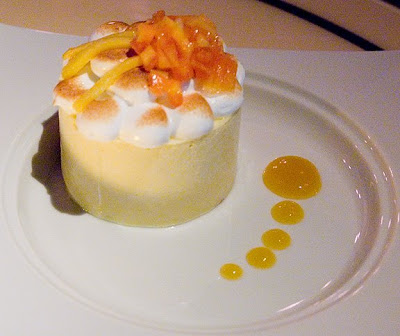 This was ethereally light, no small trick for tres leches, and had a nice bright flavor from the mango on top, and nice layers of sweetness that evoked the traditional tastes of this cake, while giving it a modern spin.

I've forgotten most of the details about the drinks, but we had a few, all of which were good, and often quite interesting, with surprising elements like tomatillo, or cumin, or chile incorporated. Oh darn, I'll have to head back and get more drinks to try to refresh my memory. I'll let you know how that goes.

As I mentioned, my dinign partner Katie was recognized, so I'm not sure how typical of a service experience we had, but our waiter was very nice, very well-informed, and gave us good suggestions. There's a hive of worker-bees waiting to refill your water, clear your plates, or bring you another something, so overall, the service seems quite polished, especially for so early on.

So overall, I loved the food, I'm still a little mixed about the whole experience. It'll be interesting to see how it feels with a full room, maybe the decor won't bother me so much, but or right now I just wasn't digging the visual aspect of the space, while quite impressed by the visuals on the table. Plates and glasses and other serviceware are very elegant, as is the food itself.

It's not cheap. The 4 plates we ordered, and a side of beans, and dessert, with three drinks, came in at about $90. That probably would have been enough food for two, although we might have wanted another plate or two. With the two things the kitchen sent us, we were stuffed.

It's an interesting time for Mexican food in Philly. We've slowly accumulated several good basic taquerias, and the last few years have seen a few more upscale offerings as well with Xochitl, Cantina Los Caballitos, and whatever Molcajete Mixto has turned into as good examples.

The also-new Cantina Dos Segundos offers an interesting contrast to Distrito - they too are doing serious cooking, based on traditional recipes, tweaked with high-quality ingredients, but the presentations are very different. Their portions are huge, prices lower, and the overall feel is a bit more relaxed. The food there is surprisingly refined as well, I've been really impressed by a couple of recent meals, but it's presented in a more low-key way. I'm pretty thrilled to have both options.

I like the food at both places, and their approaches are different enough that I don't think I could say one is "better" than the other. I suspect I'll find myself at Dos Segundos more often, as a regular stop in the dining rotation, and reserve Distrito more for special occasions. I'm not sure that's what Garces intended, but by the middle of the meal, it was feeling a bit more like a destination restaurant, not an everyday spot to drop-in on frequently. It'll be interesting to see how others use it. I'm very curious to see what the university community of Penn and Drexel students and staff makes of it. It's got the look of a perfect party spot, but the prices and elegant presentations may dissuade some of them, this is not really a spot for nachos and beer. They do have those things on the menu, along with a few other not-so-challenging dishes, and who knows, maybe that crowd will embrace expensive tiny Kobe beef tacos.

In any case, it's a good time to be in Philly if one is interested in Mexican food...