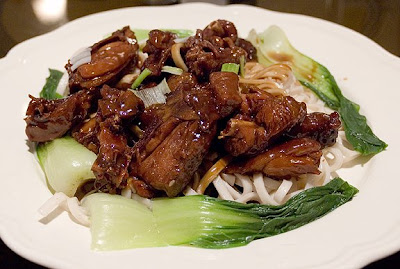 Update: Sadly, this address has been bad luck for a series of restaurants. Zhi Wei Guan closed, and at least for now, I know of no place to find Hangzhou cuisine in the Philly area. They're missed...

The storefront that housed the Dumpling House (for about a minute and a half) has been the site of a lot of restaurants that have come and gone quickly. Let's hope Zhi Wei Guan stays around a lot longer!

They are a welcome addition to Chinatown, adding to the increasing diversity of regional cuisines we're seeing lately. For many years, and even today, most of the restaurants in Chinatown have served an Americanized version of Cantonese cuisine. That food is often unrecognizable as "Chinese food" to people from China.

But Cantonese is only one of many regional styles of Chinese cooking. because of the large number of immigrants from Guangzhou, it became the dominant style in restaurants in the US, but it's by no means the only kind of food one finds in China.

Despite the prevalence of homogenized American style food, we're fortunate to have a few alternatives in Philly's Chinatown. Some places have featured these other cuisines for quite a while, often just as a small section of a more mainstream Americanized menu. Empress Garden has Shanghainese food (if you know where to look.) Four Rivers, Chung King Garden and Szechuan Tasty House purvey the numbing spice of Sichuan province. Dim Sum Garden trades in the comforting noodles and buns of Shanghai. Ong's offers Chiu Chow cooking. Pot Luck Café serves Fujian and other styles. If you want to venture out to the suburbs, Han Dynasty has great Sichuan and Taiwanese. 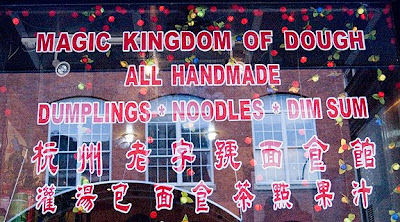 And importantly, Zhi Wei Guan serves Hangzhou cuisine, noted for delicate, light flavors. They've started out modestly, hoping to build up to a larger, more elaborate menu. They've decided to start by concentrating on noodles and other dough-based foods, leading to the slightly quirky sign in the front window proclaiming "Magic Kingdom of Dough." There's actually more on the menu beyond dumplings, noodles and other dough-based snacks, but the focus is on the starchy stuff.

The best news is that they make very good Xiao Long Bao, the "steamed juicy buns" or "soup dumplings" that are so popular in nearby Shanghai. It wasn't long ago that we would bemoan the lack of good Xiao Long Bao in Philly, a few places had them, but they seemed to be pre-made, probably frozen, or even if not, they were lacking the delicacy of the truly great juicy buns. 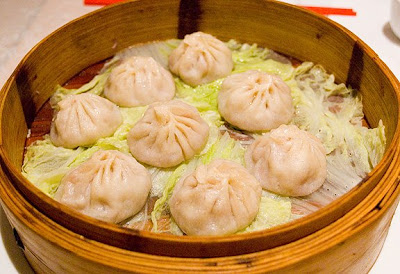 Now we have Dim Sum Garden, making very good ones, and Zhi Wei Guan which might be making my favorites right now. The first time I tried them, back in the spring, I thought the wrappers were too thick, and there wasn't enough broth inside. I liked the flavor, but the overall texture and balance seemed off. In the intervening months, the chef had intensive training with a master chef visiting from China, and he told us they spent a whole day just on Xiao Long Bao technique. And I think it shows, the ones I had most recently were excellent, with delicate wrappers and a perfect soup-to-dough ratio. 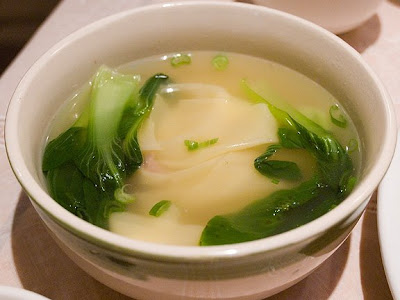 We also tried their wontons, ethereally silky noodles encasing a small ball of pork, in a light broth. This really showed off the elegance of their dough, clearly made freshly, and with great care.

One note about the menu: it's not always completely clear what will be served in a soup, so ask if you're not sure, if you care. I've usually just ordered stuff and seen what shows up. Sometimes I get something with a sauce over noodles that I thought would be a soup, other times it's a soup that I thought would be dry. I never really care, it's always tasty.

But if one is not careful, it's possible to order a lot of similar things without realizing it, so pay attention, and make sure you don't order 7 variations on the same thing. Eventually, they hope to expand the menu even further, so I suspect it will be less likely to order a whole dinner of noodles...

We're encouraging them to offer some of the classics of Hangzhou, Like Dong Po Rou and West Lake Fish, and they may do that if traffic increases enough to justify keeping those expensive ingredients around. So, for completely selfish reasons, GO HERE NOW!!! I want to see what else they can do, and that's going to require some more customers! 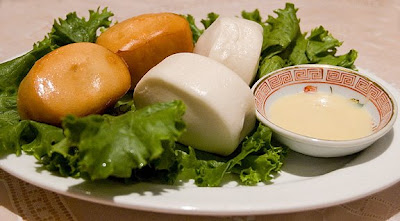 As the magic kingdom of dough, it makes sense that they'd have breads too, and this combination of steamed bread and fried bread is a good intro. They're fairly plain, but dipped into the condensed milk served alongside, both styles make a nice snack. I much preferred the fried version, which seemed a bit like a nice fresh donut, and they tell me you could ask for just fried if you want. I'd imagine these breads might be nice alongside other savory dishes as well.

They do an nice version of a few classic noodle dishes as well. The Zha Jiang Mian had a delicious ground pork topping. The sauce on the sesame noodles was light and subtle, but very tasty. Basic fried dumplings and shu mai were well-made, if not especially distinctive from other versions we've had. 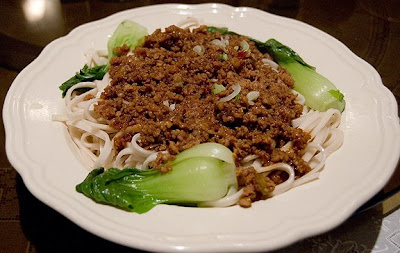 We really loved the Hangzou Duck on noodles (pictured at top). We got it another time as just duck, and while it was every bit as delicious, we really missed the opportunity to soak up that deep, dark, concentrated sauce with the noodles.

It could get a little tedious if everything were based on dough, so I'm glad to report that there are a few vegetable and meat dishes that even someone on Atkins could get excited about. Our favorites are the double-cooked pork dishes. They're currently running a Spicy Double-Cooked Pork Belly that places the braised, then stir-fried, slices of pork in a slightly spicy sauce. The preparation technique renders the pork very tender, and not too fatty. The flavors reminded us a little of a Sa Cha sauce, but with a more delicate touch. The fresh bell peppers gave the dish a welcome lightness. 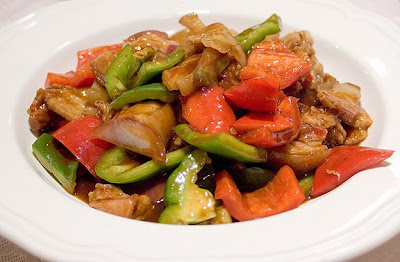 We'd had another version of this with a lighter sauce that was almost as seductive, but this spicy sauce is something special, I'm eager to get back and have that again. As is often the case in traditional Chinese restaurants, it's worth taking care to make sure you're getting pork belly, if that's what you want, and not pork stomach, which is sometimes offered as well. We tried the pork stomach here, and it was not bad, with a texture and flavor similar to tripe, but it's not nearly as luxuriously meaty or fatty as the belly. It's worth asking if it's bacon, or fatty pork, or streaky pork, or 5-layer pork, those terms usually mean pork belly.

On an early visit we ordered the Pork Tongue in Herb Sauce. We found the meat to have a delightful soft texture, the reddish "herb sauce" to have a mysterious sweetness with a touch of anise. This may only be listed on the menu as a noodle dish now, but we liked it better plain, the flavors were more intense. Although having it on noodles is not so bad either...

Amidst all this dough and meat, it's nice to have some vegetables, and I'm happy to report that they do a nice job with some basic greens. 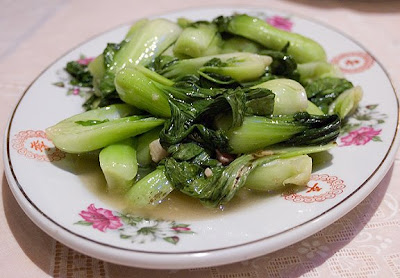 Baby Bok Choi is prepared in a fairly typical way, with lots of garlic, but it's worth noting that they do it just right: the tiny vegetables are tender and sweet, artfully cooked to just the right point, strongly garlicky, but not overwhelming.

We've also had excellent snow pea greens, prepared similarly. We just ask what greens they have, and go with whatever they recommend.

Zhi Wei Guan may not have the largest menu in Chinatown, but they have lots of interesting options, and most importantly, they provide a welcome alternative to the same-old menus around town. Hangzou cuisine offers some excitingly different flavors and textures from the Americanized Chinese food that 's so pervasive, and even other authentic regional Chinese cooking we're more likely to find in the US.

You'll find a few familiar things on the menu, perhaps prepared in a different style than you're used to, and plenty of things you won't find anywhere else. I hope we can support this elegant style of cooking, and continue to see more authentic regional specialties of all kinds.