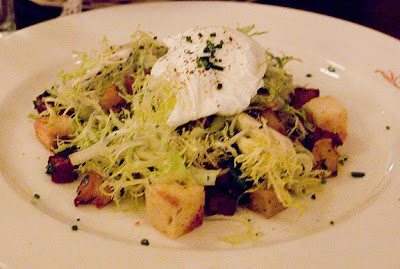 What?!? Huh?!? Sorry, I really can't hear you, my ears are still ringing from dinner at Parc, the new bistro on Rittenhouse Square. Of course bistros and brasseries are usually bustling places, but this one is ridiculous. It's a lovely space, carefully reconstructing the romantic notion of the classic Parisian dining establishments, with lots of tile, interrupted only by wood and glass, mottled mirrors, ceiling fans, and light fixtures that imply they might have been switched-over from gas. It feels very authentic, evoking a place like Brasserie Lipp in Paris, more of a see-and-be-seen power spot than a casual neighborhood favorite.

But I've been in some bistros and brasseries in Paris, and in lots of places seeking to imitate that style in the states, and I've never encountered one so deafeningly loud. It's not really a surprise, it's a big space that seats lots of people, constructed with lots of reflective surfaces. But wow, something needs to be done, or I'm only going back when the place is almost empty. A little buzz and energy is desirable in a place like this, but when you can't hear your dining partners, it makes it hard to relax and enjoy your meal.

The staff was very nice, and service was generally very good, especially considering the place had only been open a few days when we went. We only had one problem with service, and that was that the ceiling fans were cranked up so high that we had a strong cold wind on our table, enough that it kept blowing out our candle. More problematic was that it was insta-chilling our food. A manager promised to fix it, but nothing changed and we never saw him again.

That same manager was very helpful when we got a very weird, funky glass of wine. He was very prompt and professional about pouring a replacement and making sure that it was OK. As it turns out, it is a very odd Shiraz in any condition, but that first glass we got was sour and acrid, even more than it was intended to be. The replacement, apparently from a new bottle, was still odd, but significantly better, and they handled the situation well. 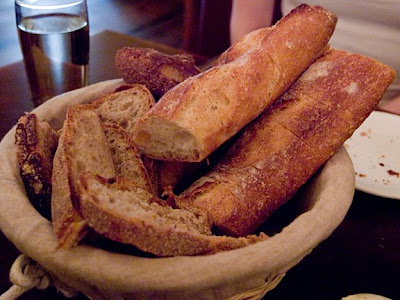 One outright rave: the bread is excellent. We loved the baguettes, and liked the heartier, darker bread too. When we first asked for bread (it may have been coming anyway, but we were impatient... ) we got a fairly modest selection, which we powered-through in about 35 seconds.

Shortly afterward, we snagged someone walking by the table and asked for more, and to her credit, her response was "I'll make sure that happens" not "I'll find your waiter" or some other evasion. And indeed, a very short time later, we got a much more generous basket.

I'm only a little embarrassed to say that we came pretty close to finishing all that.

We also thought the charcuterie was very good. 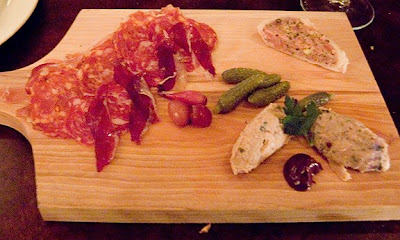 There's prosciutto under the salami, and what I think was duck prosciutto on top of that, all of which were delicious. The country pate and duck rillettes were both quite pleasant, but the unexpected star might have been the chicken liver mousse, which was creamy and airy and intense all at once. Extra points for good cornichons and pickled onions.

On the down side:
The majority of our food was only good - which is to say not at all bad, but not exactly thrilling either, and we're the kind of weirdos that actually do get thrilled by a good steak frites, or a perfectly roasted chicken. 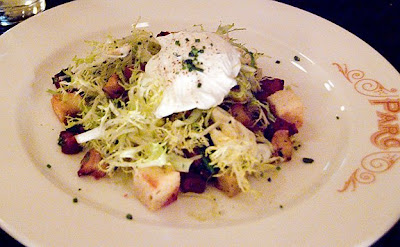 The Lyonnaise Salad was decent, I'd probably get it again, but it was missing a little spark, I think mostly in the dressing, it needed a little more bite, or intensity or something.

I didn't get a good photo of the escargots, but they too were good, but not transcendent. I liked the garlicky sauce soaked up with the nicely-toasted rusks, and the snails were tender, but didn't taste like much themselves. I suspect we're still pining for the Pif snails, and these are a different style, which may be an unfair comparison. Regardless, overall good, but not a must-order. 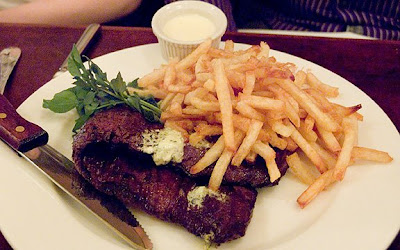 The frites that accompany the steak are excellent, crisp and tender. The hanger steak itself had a good solid beefy flavor, but that was about it. The compound butter was pretty subtle, and relatively sparse, and there was not much of a sauce, if any, maybe just juices. It just wasn't as vivid as it should be. This dish at Starr's previous bistro Blue Angel was not much different in composition, but tasted WAY better.

My picture of the roast chicken didn't turn out all that well, which seems oddly appropriate, because it tasted kind of blurry too. The texture was not good at all, it had a mushy, mealy feel that I can only assume comes from brining. I can't imagine what else would to that to a chicken. The flavor was a bit muted too, helped along somewhat by a rich sauce, but an ideal roast chicken shouldn't need that. 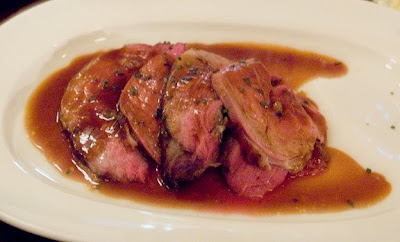 The lamb was delicious, one of our favorite things all night. This dish, probably because it was sliced, suffered most under the fans, or maybe it wasn't all that hot coming out of the kitchen, but we can only imagine that it would have been even more delicious hot. The polenta that comes with this (which we asked for on the side) was very good. If I had any complaint, it would be that the sauces on everything seemed a litle too similar, as if there were one huge pot simmering back in the kitchen labeled "Le Sauce."


The duck confit had good flavor, but was just too dry for my taste. I've it like this often enough that I feel like it might be a style, not a mistake. But if so, it's not my favorite version. The duck confit at Standard Tap, or one we got as part of a tasting menu at Matyson were much more tender and moist, while still gaining that concentrated flavor from the preservation process. Again, not bad, just not something that I would return for. 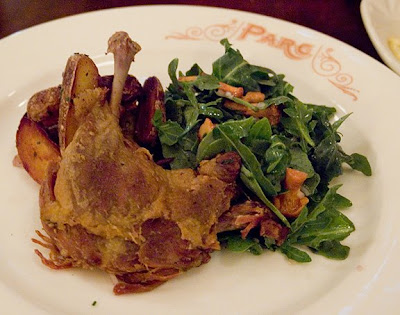 So overall, I'm just not sure what to make of this place. This style of food isn't really that hard to make, I've been quite happy with meals I've had at other modern recreations of bistros, including Balthazar in NY, Brasserie Jo in Chicago, Jeanty at Jack's in San Francisco, Blue Angel here in Philly, and at Paris bistros so small and undistinguished that I didn't bother noting their names. So I don't think we're holding this place to an impossible standard, it just left us a little cold, in a few senses of the word.

I wouldn't hesitate to go back some time at an off-hour and have some bread, the charcuterie platter, and try some more from the menu. People I trust say the Onion Soup is very good. But I might have to sit outside, or avoid a table anywhere near a ceiling fan. Of course, it is early days, and some of these things, like temperature control, might be still in the process of being worked-out. I hope so - I like the look and feel, it's got the kind of food I'd love to eat on a regular basis, and the prices are not totally out of line. We'll see...
Posted by philadining at 1:31 AM